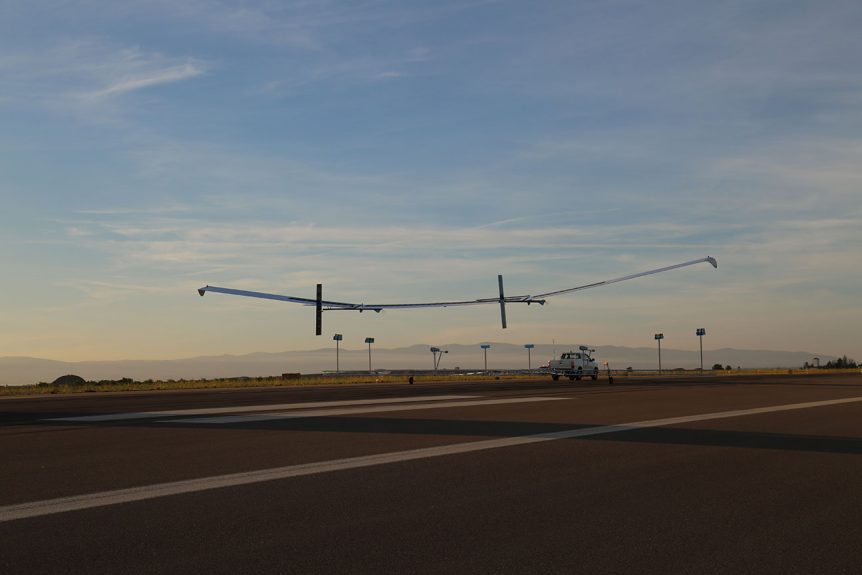 Established in 2014 by Ordnance Survey and private investors to develop and commercialize the UK’s first commercial sub-orbital Earth Observation High-Altitude Pseudo Satellites (HAPS), Astigan is both the aircraft company and product of that partnership with OS.

Ordnance Survey produces maps for private, government and business users, including pre-printed print maps and custom charts downloadable to PCs or mobile devices.  These can be as elaborate as items containing “fly-throughs” of requested routes for hiking, biking, driving or even flying trips.  3D modeling enables users to visualize the terrain and essential elements before committing to a flight.

To enable accurate mapping and application development, the team has created a 38-meter (124.7 feet) wingspan, twin-motor high-altitude, very light machine that will not only chart the landscape, but provide data for environmental, analysis of changes in the geospatial landscape, monitor agricultural factors such as soil erosion or crop yield, provide a communication link in remote areas and in disaster emergencies, and enable real-time surveillance of borders (an aerial “wall”?).  It can remain aloft for 90 days at a time, its batteries recharged by a full span of solar cells.

The 149-kilogram (327.8 pounds) HAPS (high altitude Pseudo Satellite), “Can be positioned to view any part of the Earth and collect data over much wider areas compared to conventional aerial imagery capture.”  Its 25-kilogram (55-pound) Payload enables carrying cubesat-compatible packages and “advanced data download and encryption technology.”

With a history spanning 226 years, OS has had a large influence on British explorers, warriors, and politicians. According to OS, “Business Minister Lord Henley said: ‘The UK has a particularly successful track record in mapping and associated technology. This exciting new unmanned aircraft project is a brilliant example of the innovative thinking behind our modern Industrial Strategy and should lead to global business opportunities. As well as having the potential to support key government objectives such as upgrading the UK’s infrastructure, it could benefit emerging technological areas such as smart cities and self-driving vehicles which both rely on accurate 3D mapping.’” 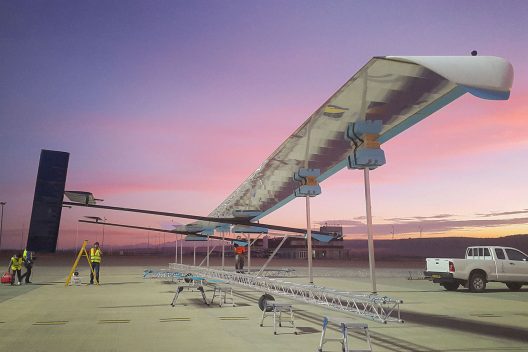 A large HALE, Astigan requires a pickup tow for takeoff

The project’s aim is to develop a UK designed and manufactured, cost-effective and reusable vehicle which could carry scientific instruments, cameras and telecommunications equipment above the majority of the Earth’s atmosphere. And, for the platform to perform many of the tasks of satellites without the cost and risk of having to go into Earth orbit.

The platform is expected to be used in mapping; environmental and climate monitoring; natural disaster/hazard early warning and emergency communications networks; precision agriculture; and commercial security, intelligence and border control.

The guiding lights for the project are recognized for their expertise and accomplishments, their names sometime festooned with those abbreviations often following names of distinction.

Mike Carr, OBE (Order of the British Empire), FREng (Fellow of the Royal Academy of Engineering) serves as Chairman for the company and on several innovation and engineering boards.

Brian Jones OBE, DSc (Doctor of Science), MA (Master of Arts), Astigan Program Manager and Director on the Astigan Board and currently Managing Director, has worked on various aviation projects during the past 25 years.  He flew a balloon around the world in 1999 with Solar Impulse pilot Bertrand Piccard.  His books about that flight were in the top ten of several international best seller lists.

Neil Ackroyd is acting CEO for Ordnance Survey, and wrote the first book on the application of GPS, published in 1990.

The two other directors, Clive Mosey and John Bowman, are Chartered Accountants – a bit like Certified Public Accountants in America – with broad experience in the publishing industry.

With history, leadership, and a great range of products, Astigans may soon be flying over this former colony, downloading information with a British accent.