“Bobby” is Audi’s computerized “driver” for their RS 7, which they demonstrated before thousands of spectators in the grandstands at the 4.574 kilometer (2.842 mile) Hockenheim race track in Baden-Wurttemberg, Germany on October 19.

The video, despite the somewhat sometimes annoying narration, gives a good impression of the run, showing the acceleration, braking and cornering through all 17 turns from both inside and outside the car.  The inside views belie the speed the car attains, looking a bit unearthly by the precise, smooth lines the car takes, the envy of any “real” race car driver.

Green Car Congress reports, “The Audi RS 7 piloted driving concept car drove a clean racing line at the Hockenheimring—full throttle on the straights, full braking before the corners, precise turn-in and perfectly metered acceleration when exiting the corners. Forces of over 1.3 g occur during braking, and lateral acceleration in the corners can reach 1.1 g. Tests on the track in Hockenheim suggested an expected top speed of 240 km/h (149.1 mph) and a lap time of 2 minutes and 10 seconds.”  The track record, by the way, was 1:13.780 set by F1 driver Kimi Räikkönen,in a McLaren in 2004.

Audi, of course, could not but help be proud of their accomplishment.  Professor Doctor Ulrich Hackenberg, a Technical Development Board member at Audi AG, said, “The top performance by the Audi RS 7 today substantiates the skills of our development team with regard to piloted driving at Audi. The derivations from series production, particularly in terms of precision and performance, are of great value for our further development steps.” 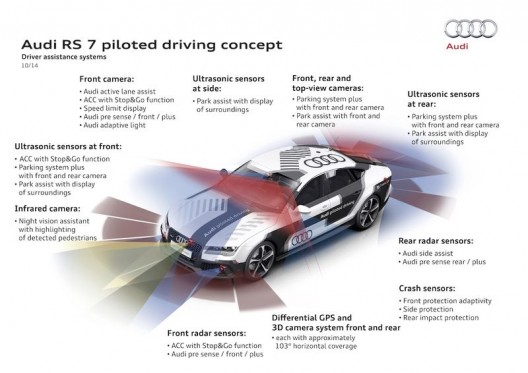 Unlike Google’s Priuses and Lexuses plying the roads in the Bay Area and their bubble cars scooting around their Mountain View campus, Audi’s driverless car retains its smooth lines and hides all its sensors within its bodywork.   The number of devices on the RS 7, including a differential GPS and 3D camera system front and rear, front, rear and top view cameras, infrared camera, front and rear radar sensors, front, rear and side crash sensors, and ultrasonic sensors, are a bit overwhelming, but allow the car to sense its position on the track within 1 centimeter.  That’s probably responsible for the crowd-pleasing parking job at the run’s finish.

According to Green Car Congress, “Experts from Volkswagen Group Research, the Electronics Research Laboratory (ERL) and Stanford University (both in California) are supporting Audi as partners in the further development of piloted systems.”  Doubtless, the group will continue to refine the technology and produce more practical applications for non-competition drivers.