Audi takes the environment seriously, and in a statement of corporate responsibility, shows that doing good for clean air can help the company do well in the competitive car market.

“The Company is establishing a portfolio of sustainable sources of energy as part of its Audi e-gas project. Renewably generated electricity from wind or solar power, water and carbon dioxide are used to produce hydrogen and synthetic methane, the Audi e-gas. The plant that Audi has built in Werlte, Germany is now in the commissioning phase. It produces the fuel for the first CNG model from Audi, the new A3 Sportback g-tron, which will be launched before the end of the year.” 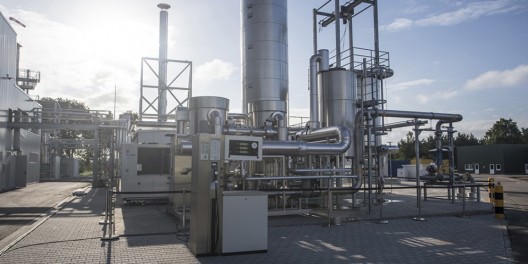 Opening the Werlte e-gas plant will help Audi develop a chain of sustainable energy carriers, producing and distributing liquid fuels for which their cars will be specifically designed.

According to Green Car Congress.com, the plant can convert six megawatts of input power, using renewable electricity for electrolysis to produce hydrogen and oxygen.  Since there is no well-established network of hydrogen fuel stations in Germany (or anywhere else, for that matter), Audi reacts the H2 with CO2 in a methanation unit to make renewable synthetic methane.

Audi claims the fuel is virtually identical to fossil-based natural gas and can use existing infrastructure for distribution – Germany has a natural gas network which will begin receiving Audi gas this fall.

Green Car Congress reports, “The Audi e-gas plant will produce about 1,000 metric tons of e-gas per year, chemically binding some 2,800 metric tons of CO2. This roughly corresponds to the amount that a forest of more than 220,000 beech trees absorbs in one year. Water and oxygen are the only by-products.”

Audi explains that carbon dioxide used by the Werlte e-gas plant comes from the exhaust flow of an adjacent biomethane plant operated by the energy utility EWE, and is separated from the biogas produced from organic waste to obtain high-purity biomethane. 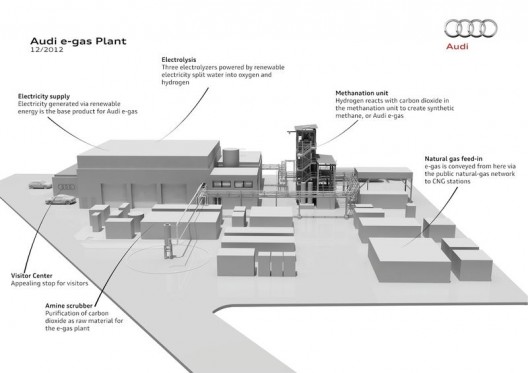 Audi e-gas could be used to store energy generated by wind or solar energy to fill lulls in those generating systems, but most of the gas will be destined for g-tron cars from the manufacturer.  1,500 new A3 sportback g-trons could go 15,000 kilometers (9,320 miles) per year each on the e-gas produced at Werlte.

To ensure that Audi gas is burned in Audi cars, customers can order a quota of e-gas when they purchase the car, opening an accounting process through the customer’s Audi e-gas refueling card.  The process makes sure Audi supplies the amount of gas they purchase is supplied to the grid by Audi – although it may not be directly from northern Germany.  To balance their accounts, Audi will feed e-gas into the overall distribution system to replace the amount customers pump at CNG filling stations.

The A3 uses less than 3.5 kilograms (worth about 4 euros or $4.55) of e-gas per 100 kilometers (62 miles).  The cars using e-gas are climate neutral.  CO2 emissions from the car have been bound during e-gas production.  In a life cycle analysis (LCA), Audi claims that even with construction and operation operation of the plant, e-gas’s CO2 emissions are below 20 grams per kilometer – about one-fifth of European goals for automobiles.

The A3 stores its 14 kilograms (30.8 pounds) of e-gas in two compressed natural gas (CNG) cylinders under the luggage compartment floor.  Tanks are relatively lightweight, made of an inner layer of impermeable polyamide and two outer layers of carbon fiber-reinforced polymer (CFRP). 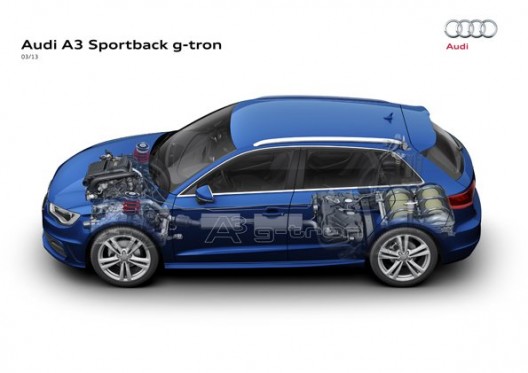 An electronic gas pressure regulator controls flow according to driver demands, and when e-gas drops to 0.6 kg (1.32 pounds), switches over to gasoline mode.  Audi explains the car is “fully bivalent,” and can run 400 kilometers (248 miles) on e-gas and another 900 km (560 miles) on gasoline.  With over 800 miles possible, drivers should experience little “range anxiety.”

With another approach to creating e-fuels starting operations in Hobbs, New Mexico, Audi seems intent on becoming a full-service automobile producer and service provider.  With Tesla installing a network of Superchargers and battery switching stations, such services may become a part of all car maker’s networks – which might become problematical for existing fuel distributors.