Autoblog.com provides an early view of Audi’s newest electric supercar and material from Audi’s press release regarding the vehicle.  Although much positive PR has been generated about the car’s new battery and its improved energy density, closer examination shows it’s about what we might expect, and close to what Tesla already offers.

Audi’s latest iteration of its R8 e-tron uses a “multimaterial Audi Space Frame,” variable geometry wheels which open and close to ventilate and streamline, and a battery pack which occupies the same space as the earlier model’s but which has twice the energy storage capacity.

The space frame includes a carbon fiber reinforced plastic (CFRP) rear-section module which comprises the luggage compartment, but also provides rear crash protection through corrugated walls.  This may also be a way to maintain security for the battery pack, which forms a “T” with the top bar forming a high wall behind the car’s two seats.  Battery modules stacked four-high might form a structural element, but need to be protected themselves. 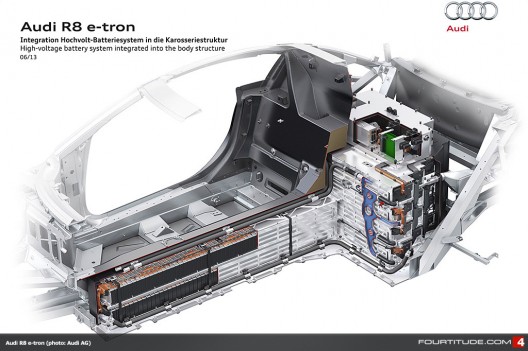 The battery pack, which could store 49 kilowatt-hours in its original chemistry, has been developed to store 92 kWh in the latest version (the largest Tesla pack is 85 kWh) – at no increase in weight.  Energy density has increased from 84 Watt-hours per kilogram to 154 Wh/kg.  An on-board Combined Charging System (CCS) allows charging “with direct and alternating current” in “significantly less than two hours.”  The improved battery pack more than doubles the previous version’s 215 kilometer (133.6 mile) range to 450 kilometers (279.6 miles), putting the car in Tesla S territory.

The impressive part is the doubling of energy density, however, with a total package weight, including battery management systems, charging gear, and ancillaries certainly competitive with almost any other electric vehicle.  Audi is quiet about their proprietary chemistry, referring to it only as lithium-ion.   Tesla’s 85 kWh pack, for instance, weighs 1,323 pounds, or around 155 Watt-hours per kilogram.  Contrarily, much is being made of Audi’s doubled energy density, when the original’s batteries were based on at least six-year-old technology.  Dr. Yi Cui’s projection of an eight-percent improvement each year would come close to approximating this progress.  It would lead one to suspect that this is close to the best one can hope for with today’s best and very expensive technology. 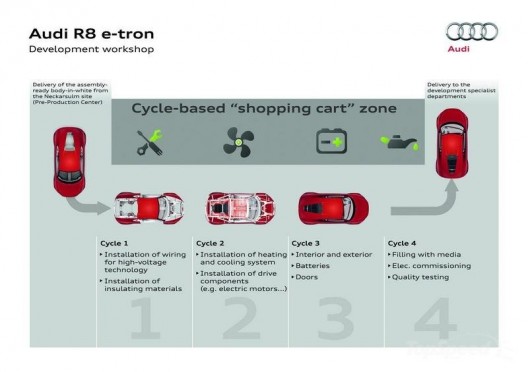 Audi uses the order-built e-trons as a development tool, and may be putting lessons learned into a sedan that might give the Model S some competition.  Pricing will be high, though, with insiders suggesting $250,000 for each custom-built model.  The good news is that battery pack, though, with much smaller packs that might be used in light aircraft benefiting from the high energy density.

Competition does improve the breed, and sometimes provides benefits for adjacent technologies.