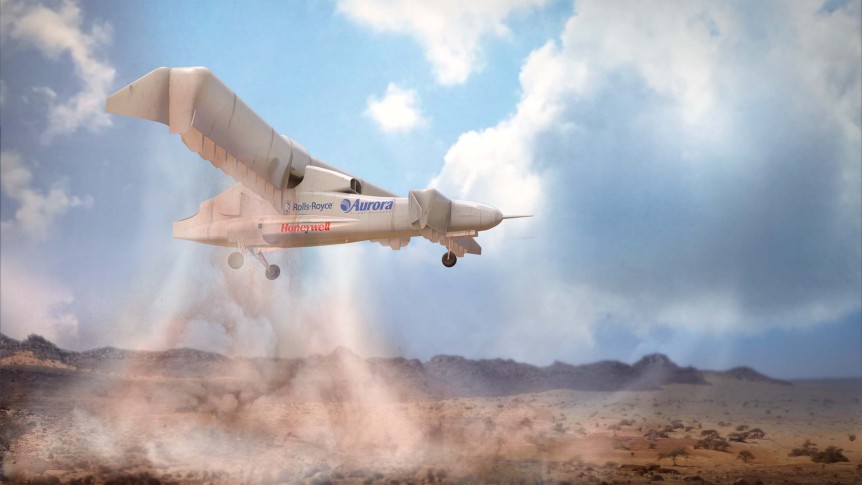 Electric Aircraft Symposia attendees will be familiar with presentations by Dr. John S. Langford, Chairman and CEO of Aurora Flight Sciences, an aeronautical firm continuously redefining the leading edge of aerial technology.  He has shared the firm’s achievements in autonomous flight, with the company’s Centaur, a twin-engine light twin going from takeoff to landing at a distant airport without the need for pilot intervention.

This Phase 2 award takes from a preliminary design study to a Design, Development and Integration phase, which DARPA explains, “… addresses in innovative ways many longstanding technical obstacles, the biggest of which is that the design characteristics that enable good hovering capabilities are completely different from those that enable fast forward flight. Among the revolutionary design advances to be incorporated in the technology demonstrator: 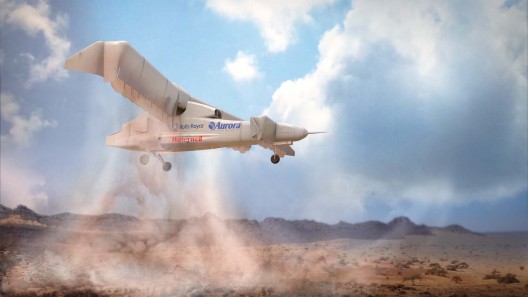 All the new technology embodied in this aircraft did not exist several decades ago, and the performance requirements sought by DARPA would certainly have raised eyebrows even 10 years ago.  The craft must achieve a top speed of 300 to 400 knots (345 to 460 mph), raise aircraft hover efficiency from 60- to 75-percent, present a lift-to-drag ratio of at least 10, and carry a useful load “of at least 40 percent of the vehicle’s projected gross weight of 10,000-12,000 pounds.”

Such expectations remind your editor of Airwolf, a TV series from the mid-1980s about a supersonic helicopter.  Despite the aerodynamic problems from having advancing and retreating rotor blades alternating between supersonic and subsonic regimes at every rotation, Airwolf was sonically stealthy, able to sneak up on the bad guys it helped dispatch every week.

Lightning Strike avoids those sticky issues, though, by distributing thrust from a total of 24 box-fan-like thrusters (18 on the wing, six on the canard).  These ducted fans are reminiscent of high-performance electric ducted fans (EDFs) found in model aircraft, but translating the three kilowatts produced by Lightning Strike’s turboshaft engine — the same used in V-22 Osprey tiltrotor aircraft.  Instead of mechanically driving two large propellers like those on the V-22, the engine drives three Honeywell generators that feed electricity to 24 motors.  Controlled by triple-redundant actuators, each motor is “over-actuated,” as are most systems on the airplane. 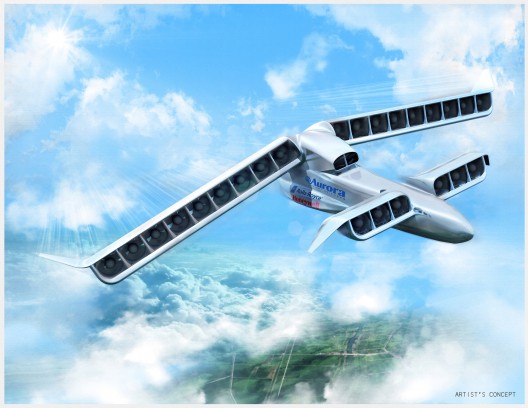 Aurora’s Lightning Strike at altitude, potentially topping out at 400 knots

This leads to complications in programming algorithms that can adequately exploit the differential thrust from 24 propulsors and ensure outcomes that point the airplane in the right direction in all axes.  Redundant systems typically have some form of “voting” mechanism to ensure compliance with the “majority opinion” of the multiple controllers.  The challenges involved are anything but trivial.

One structural sidelight of note: the multi-cellular wing construction makes the airplane essentially a bi-plane, with great wing stiffness built in.

Dr. Langford shared his anticipation of success in those challenges.  “Aurora is proud to support DARPA on what we all hope to be a truly historic breakthrough in aviation technology. If successful, VTOL X-Plane’s radically improved flight capabilities could lead to revolutionary advancement of the U.S. military’s future mission capabilities. We’re honored to have been selected by DARPA to build and flight test the demonstrator aircraft.”