Zipline, a San Francisco-based startup, has partnered with the government of Rwanda to air-drop medical supplies to remote villages, truly a potential life-saver for many without immediate access to medicine or blood for transfusions.

Another firm, Matternet, displayed its quadrotor delivery systems five years ago at the Green Flight Challenge Expo held at NASA Ames Research Center following the completion of the flying completion. They have delivered in New Guinea, the Philippines, Bhutan and Haiti for Doctors Without Borders/Médecins Sans Frontières (MSF), and according to the New York Times, “experimenting with the government of Malawi and with UNICEF to deliver infant H.I.V. tests by quadcopter.”

Zipline drones, 22-pound, fixed-wing, electric-powered airplanes, can carry a 3.5-pound payload, and have enough range to make an out-and-return flight of up to 75 miles from a central warehouse in Kigali. Their 100 kilometer per hour cruise speed enables deliveries to most places within 30 minutes. When they return to home base, technicians swap batteries and load a SIM (single inline module) card with a new destination into the plane’s controller. Each plane can make dozens of deliveries, and a central supply point can provide hundreds of life-saving packages a day with its dozen airplanes. The craft use GPS and Rwanda’s cellular network to navigate. The autonomous drones can drop a parachute accurately enough that the firm claims a drop zone equivalent to four parking spaces is room enough to retrieve packages.

Begun in 2014 after Keller Rinaudo and Will Hertzler visited a young health worker in Tanzania to review “his text messaging system that enabled hospital workers to urgently request medical supplies in life-or-death situations,” Zipline is an attempt to overcome local infrastructure problems.  Rinaudo saw that despite the instant communications, slow delivery of requested supplies by the primitive road systems amounted to death sentences for many who receive needed materials too late. The database showed entries “thousands of names long,” with an inadequate supply chain to supply them. 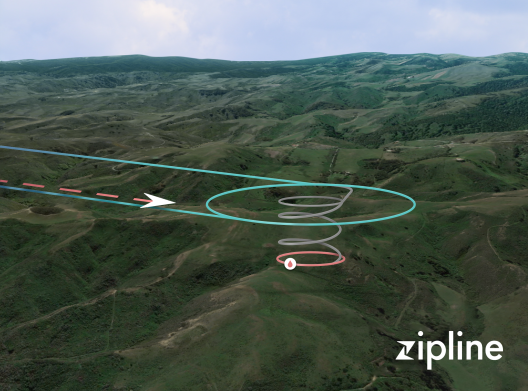 Typical Zipline delivery route from central warehouse to drop zone and return,  Rwanda, known as a land of a thousand hills, benefits from this approach

Rinaudo and Hetzler enlisted Keenan Wyrobek, a pioneering, Stanford-trained roboticist, to help design an airborne alternative, according to Wired, “The three technologists assembled an engineering team with aerospace industry experience, attracting talent from Space X, Aurora Flight Sciences, Boeing and Lockheed Martin, as well as Stanford and Google. The start-up has raised $18 million from investors including Sequoia Capital, GV (formerly Google Ventures), SV Angel, Subtraction Capital, Stanford University and individuals including Jerry Yang, a founder of Yahoo, and Paul Allen, a founder of Microsoft.” United Parcel Service (UPS) teamed with the startup by providing $800,000 in support.

Efforts seem to be moving forward and showing early successes. Because of the talent pool within the company, everything from the programming of flight plans to the design and manufacture of packing materials is done in house. This kind of all-inclusive organization seems to make for rapid progress and quick corrections of problems that pop up.

The Times article includes this insight from Jay Gundlach, president of FlightHouse Engineering, an Oregon-based aviation consulting firm. “This is the new face of the aerospace industry. Established unmanned aircraft companies should learn from Zipline’s agile and innovative culture.”