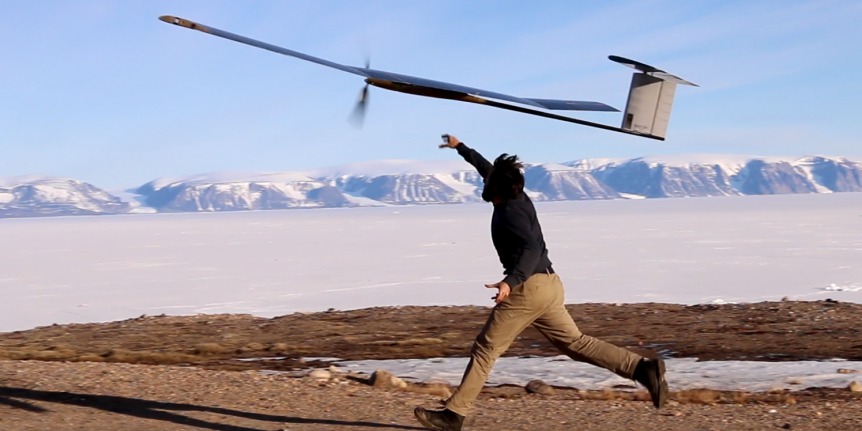 Three unpiloted aerial vehicles of wildly different configurations recently set endurance marks, each a “personal best,” with some achieving world records.  The varying designs show what can be achieved by careful aerodynamic design and efficient powerplants.

Not just a fair weather UAV, Aerovel’s unmanned Flexrotor, named for the sea nymph Actaea, “lifted off into a grey and rainy morning with 7.5 kilograms (16.5 pounds) of fuel onboard”.  According to the company, “It transitioned from hover to wing-borne flight, and soldiered on through a showery day, a blustery night, and then another day in the breezy and unsettled air behind a cold front. As dusk fell it transitioned back to hover, and dropped gently down onto a 12-foot square helideck underway at 8 [knots] (9.2 mph). Time from launch had been 32 hours and 8 minutes. More than 3 hours’ worth of gasoline remained in the tank.”

The press release doesn’t say where the flight took place, although the firm’s Columbia Gorge home often has weather approximating the event’s description.

Dr. Tadd McGeer, founder of the White Salmon, Washington firm, explained that, “the first day was a little turbulent, and after going through the cold front we had 20-30 kt wind and lots of convection. A sailplane pilot would have used it to good effect, but Actaea was holding constant altitude and so gave up a few percent of range fighting the ups and downs.  Performance was otherwise right on expectation.” 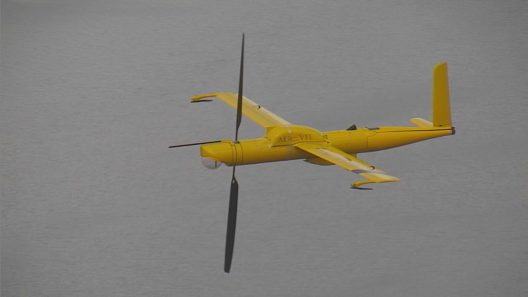 Not only sporting a more powerful diesel engine, but showing its tail feathers that spread out to form a landing platform, Actaea does not need the comb-like landing platform necessary for Flexrotor operation previously.  The tail-landing setup allows launching from an area as small as a four-meter (13 feet) skiff, even in turbulent waters.

Able to carry a wide range of sensors and cameras, Flexrotors provide a versatile platform for a variety of applications.  The demonstrated ability to take off and land vertically, coupled with  high endurance, makes the machine a useful tool for exploration and surveillance.

AtlantikSolar, a product of The Autonomous Systems Laboratory (ASL) at Switzerland’s ETH Zurich (the Swiss Federal Institute of Technology), was originally, and probably still is, intended to make an autonomous flight across the Atlantic Ocean.  It’s made flights up to 81 hours, and been used to find refugees in tough situations with its suite of miniaturized sensors and cameras.

On June 20th, as part of ongoing testing of this “perpetual” flying machine, team members from the Autonomous Systems Laboratory (ASL), designers of the drone, and glaciologists from ETH Zurich combined forces to monitor glaciers in Greenland.  Unfortunately for the planned 24-hour test, fog rolled in at the six-hour mark, and persisted until after 13 hours in the air, the drone had to be retrieved.  Enough charge was left in the battery to have allowed a full 24-hour flight.

AtlantikSolar faced the strongest winds and gusts of its career on July 3, flying into a research area while confronting up to six meters per second (1,181 feet per minute) vertical gusts and a sustained tailwind of 15 meters per second (2,953 feet per minute – 33.5 mph).  After flying for five hours and covering 230 kilometers (142.6 miles), the drone landed still nearly fully charged.  Even in the high latitudes, with the sun on the horizon, AtlantikSolar’s solar cells apparently managed to keep its batteries topped up. 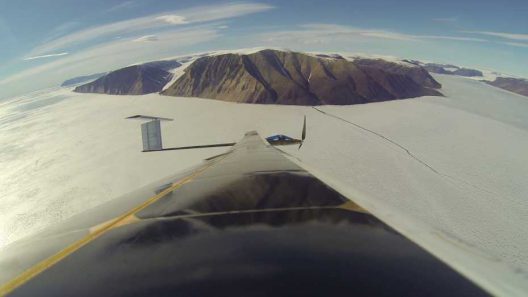 A view down the wing of the drone – solar cells in full view.  AtlantikSolar over Greenland’s Arctic wastes, the six-kilogram (13.2 pound) craft surviving high winds and turbulence

During the flight, “AtlantikSolar’s mapping revealed a large crevasse upstream at the front [of the glacier]. A few days later, some glaciologist colleagues went to Bowdoin and kept monitoring the propagation of the crack, until it suddenly collapsed.

Data collected during the flight may enable scientists to anticipate other such events.  “All together, we now have a unique set of data – describing all the fracturing phases – for improving the numerical modeling of calving, a complex and still not fully understood mechanism, which plays a major role in the sea level rise.”

A design that would have delighted Bruce Carmichael, one of the leading experts on low Reynolds number aerodynamics, Vanilla’s VA001’s 36-foot, high-aspect-ratio wing and carefully streamlined laminar-flow fuselage does all it can to reduce drag to an irreducible minimum.  Two pylons hold the wing above the fuselage, reducing interference drag between the two largest components on the aircraft.

Designed, built and flown by a five-person team, Vanilla’s VA001 lives up to its “vanilla” name as a generic unmanned air system that can be customized for different missions.  Propelled by a small diesel engine, the craft can carry a 1.1 cubic foot, 30-pound payload, and power on-board needs with up to 800 Watts.

Its sleek shape allows planned-for trips of up to 10 days at altitudes up to 15,000 feet, the airplane can loiter at 55 knots (63.25 mph) and “dash” at 75 knots (86.25 mph).  In its tenth flight starting October 18, the plane covered 7,000 miles in the next five days.  VA001 landed autonomously on October 23 following a “quite boring” flight.  According to Chief Engineer Neil Boertlein, “The plane did what it was designed to do and landed ready to go right back into the air again.”

Test Director Jeremy Novara added, “Previous flights had already validated our performance predictions, but this flight really demonstrated the reliability and ease of operation that a low-cost persistent unmanned aircraft can obtain.”

Like the Flexrotor and AtlantikSolar, VA001 can carry a complement of electronics, including electro-optical and infrared imagers, synthetic aperture radar, SIGINT systems (for gathering SIGnal INTelligence from enemy communications), and a variety of communications nodes.  Its ability to stay aloft for days makes it a good candidate for military missions where persistence is a premium, and for hovering over fires or disaster zones where real-time imaging will be invaluable.

CEO Tim Heely stated, “We have begun to fully demonstrate the viability of this ultra-long endurance aircraft system and are anxious to test new payloads and realize capabilities heretofore unimagined. We are excited to bring a new affordable, easily sustainable capability to the quickly expanding Unmanned System environment.”

The company plans to begin production in the coming months, and is open to teaming with payload providers.