Your editor spent much of his time at AirVenture 2013 in or around the Innovation Pavilion, the Experimental Aircraft Association’s nod to experimentation on a grand scale.

Flanking the doors into the pavilion were two approaches to making flight more efficient, the LAM Ailerons on a Cessna Corvallis and a dual-fuel system on an Aviat A1-C Husky CNG; “CNG” standing for “compressed natural gas.” 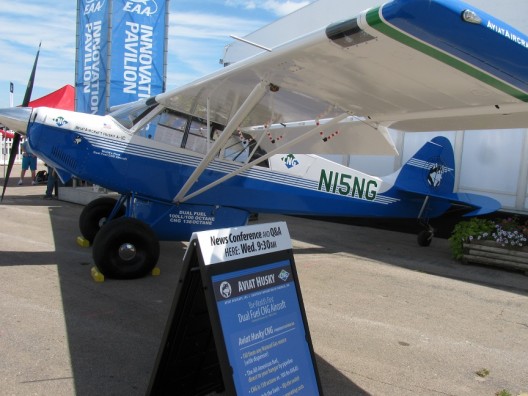 Aviat A1-C CNG outside AeroVenture Innovation Pavilion, the placard extolling its many virtues

Stu Horn, President of Aviat Aircraft, is proud of the all-American nature of the airplane, most components other than avionics having their origin in this country.  Even the fuel for this proof-of-concept Husky is a domestic product, and a possible reflection of its back-country home.  Afton, Wyoming, where Aviat makes Huskies, has resurrected the Pitts Special, and continues support for the Aviat (formerly Christen) Eagle.  Afton lies within a two-hour drive of Yellowstone National Park, and closer to Salt Lake City or Pocatello, Idaho than any major city in Wyoming.

Because of this, many pickups and trucks in the area rely on compressed natural gas, a resource more abundant than gas stations in the sparsely populated region.  Many vehicles are so-called “dual-fuel” units, able to run on CNG or gasoline. 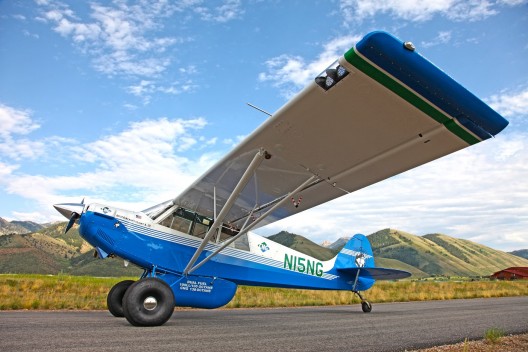 Husky in its native Wyoming habitat, where its 200-hp Lycoming makes takeoffs on hot days much less stressful

Applying the same dual-fuel technology to aircraft took some clever design, but Horn managed to fly his Aviat from its home base to Oshkosh, Wisconsin for this year’s AirVenture, mostly on gasoline, but with a cargo-pod-like container for the lightweight CNG tank that supplemented the aircraft’s range.  Like a dual-fuel pickup, one can select one fuel or another with the flip of a switch.

The four-cylinder Lycoming has a higher 10:1 compression ratio than the normal engine’s 8.5:1, since CNG has an octane rating of 138 compared to 100 low-lead aviation fuel’s 100.  CNG has no lead at all, burns cleaner, and thus reduces “smog pollutants by 90 percent… and CO2 emissions by 30 percent.”  Since CNG fueling requires a sealed connection, fumes from this act are essentially non-existent: for a conventional automobile, refueling can release 50 percent of the car’s total emissions as vapors.

Aviat’s web site claims more advantages; “We anticipate a three to four time increase in the life of lubricating oils because CNG does not contaminate and dilute crankcase oil. Engines will last longer, spark plugs will not foul, exhaust and exteriors will remain cleaner, etc.”

Horn points out that fewer oil changes reduce downtime, something a flight school will find helpful and profitable.

This economy complements the lower cost of fuel, which Aviat says will be 80-percent lower than the cost of $6.00 per gallon 100LL, roughly $1.20 for a gas gallon equivalent in 138-octane CNG.  The Aviat at Oshkosh had 50-gallon tanks for the 100LL and a 9.2 GGE tank for the CNG, giving about seven hours at 65-percent power on the demonstration aircraft.

Horn envisions trainers such as Cessna 172s or Piper Archers carrying a three-hour CNG tank, and costing around $11 per hour for fuel.  This would provide an incentive for flight schools and make it easier for students to reach solo and certification at a much lower cost than experienced today.

The Aviat web site includes further details and is well illustrated and thorough, as one would expect from a President who discusses “empirical evidence” for his claims about the Husky CNG.