Mary Grady of AVweb started an expanding dialogue with her recent opinion piece on NASA and the CAFE Foundation’s Green Flight Challenge sponsored by Google.   The stimulating and varied points of view reflect what is probably floating around in the general public’s perception of “green aviation,” ranging from total ignorance of what has been done already, to confusion about what it all means, to well-honed, technically aware arguments on both sides of the issue. 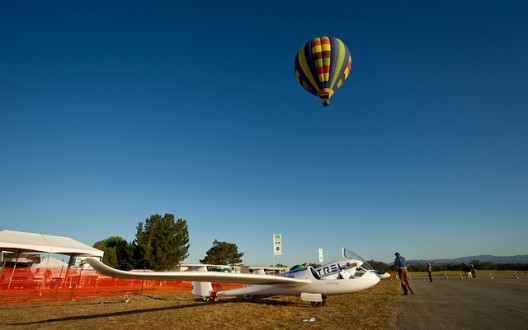 Her thought that electrification is, “the first step down a long and bumpy road that could take general aviation in new directions,” was reinforced with the following reflections that might be similar to those that readers of this blog often experience.

“For people who fly for fun — presuming there are many of those left, it seems to be one of the fastest-shrinking segments of GA — electric airplanes are sure to appeal. They are easier to deal with, and quieter, with less vibration. A few years ago at Oshkosh one of the Yuneec executives said that when model aircraft switched over from messy little gas engines to electric motors, the hobby grew dramatically.  He hoped the same would happen with real airplanes, and I think that makes sense. A nice clean battery-powered airplane just seems more modern, more reliable, simpler, cleaner, and more
manageable to a new aviation prospect. A motorglider with a quiet little electric motor can take one or two hobby flyers aloft for hours, and lunch probably would cost more than the power used. An electric trike could take sport flyers on epic flying adventures, without the tiresome noise and rattle from a gas engine.”

Readers shared their pros and cons, and the conversation continues daily, a sign of intense interest.  As every actor knows, all publicity is good publicity and the CAFE Foundation welcomes the increasing interest.