78 percent of all the air we breathe is nitrogen, the most abundant gas in the Earth’s atmosphere.  This readily available substance may do more than just give us something for inspiration (there’s a pun there), it may power our vehicles and heat our homes.  The catch is that it has to be combined with the bacterium Zymomonas mobilis, which gives off ethanol when exposed to the gas.

James B. McKinlay and a team of biologists at Indiana University at Bloomington work with a cluster of unlikely materials to produce, among other things, biofuels.  His laboratory posts the following description of the team’s work:

“Nearly all of our society’s energy and chemical needs are met by fossil fuels. Microbes have evolved a profound diversity of metabolic attributes which can be harnessed as sustainable alternatives for the production of fuels and chemicals. Our lab seeks to understand the metabolism underlying the production of useful compounds and to engineer strains for enhanced production rates and yields. In doing so, we invariably learn about how a microbe’s metabolism contributes to its physiology and how it interacts with the external environment. Our lab uses biochemical assays, genetic manipulation, functional genomics, and stable isotope tracer studies (13C-metabolic flux analysis) to study microbial metabolism.” 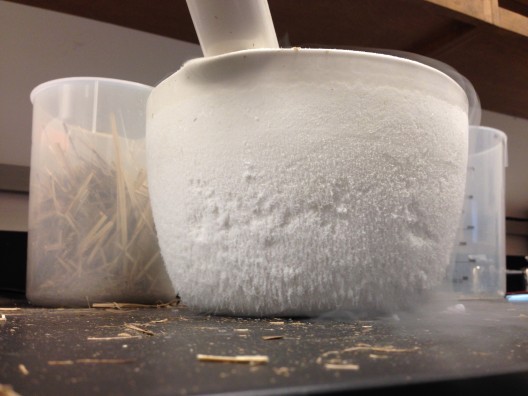 Their work with Zymomonas mobilis, could lead to a “faster, cheaper and cleaner way to increase bioethanol production,” possibly save the biofuels industry millions and make cellulosic ethanol more competitive with corn ethanol and gasoline.  Corn ethanol gets a demerit because it uses food better suited to feeding humans and animals, and gasoline gets a bad grade for its environmental effects.

Conversely, materials used to make cellulosic ethanol such as wood, grasses (remember switchgrass as a means of environmental salvation?), and the inedible parts of plants tend to be difficult to break down into sugars and from there into ethanol.  The processes require high heat and therefore energy that has to be subtracted from the energy eventually extracted from the resulting biofuel.  These raw materials are also low in nitrogen, necessary to make ethanol-producing microbes to grow.  Nitrogen fertilizers such as corn steep liquor and diammonium phosphate add to the cost.

McKinlay and his team have found that their chosen bacteria can use nitrogen gas (N2) as a nitrogen source. “When we discovered that Z. mobilis could use N2 we expected that it would make less ethanol. N2 utilization and ethanol production demand similar resources within the bacterial cell so we expected resources to be pulled away from ethanol production to allow the bacteria to grow with N2.  To our surprise the ethanol yield was unchanged when the bacteria used N2. In fact, under certain conditions, the bacteria converted sugars to ethanol much faster when they were fed N2.”

This led to the realization that N2 could serve as an inexpensive substitute for nitrogen fertilizers during cellulosic ethanol production. 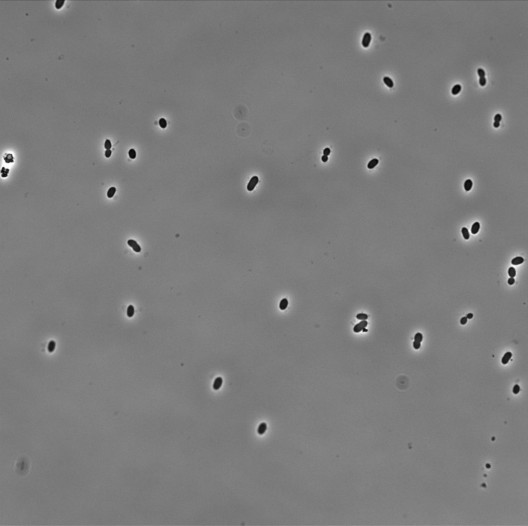 Bacterium Z. mobilis combines with nitrogen to produce ethanol quickly and cheaply. Cells can be seen dividing in this microscopic picture

McKinlay explains, “Until recently, ethanol has been produced almost entirely from food crops, but last year there was a surge in cellulosic ethanol production as several commercial facilities opened.  Cellulosic ethanol offers more favorable land use and lower carbon emissions than conventional ethanol production. Even so, cellulosic ethanol is struggling to be cost-competitive against corn ethanol and gasoline.”  Using N2 eliminates costs associated with fertilizers or baker’s yeast that degrade the cellulosic ingredients into sugars that can be converted into ethanol.  Savings from using N2 gas could amount to over $1 million per year for each ethanol production facility.  This would also pay off in avoiding carbon dioxide emissions from producing and transporting the industrial fertilizers.

UI reports that McKinlay says, “More work needs to be done to assess how this approach can be integrated and optimized on an industrial scale, but all of the data we’ve collected thus far are very encouraging.”

Combining bacteria with a gas is similar to the processes of combining engineered bacteria with CO2 from plant exhaust, something being pursued by Audi, Joule, and SolarFuel, among others.

A provisional patent has been filed in relation to the study with the United State Patent and Trademark Office.

McKinlay’s and three graduate students have their research published in the Proceedings of the National Academy of Sciences.  Authors include graduate student Timothy A. Kremer, postdoctoral fellow Breah LaSarre, and former research associate Amanda L. Posto.  McKinlay is an assistant professor in the IU Bloomington College of Arts and Sciences’ Department of Biology.  McKinlay is also studying similar means to produce hydrogen with low energy inputs.

In 2012, McKinlay received a five-year, $750,000 U.S. Department of Energy Early Career Research Program award, the agency’s most prestigious award for early-career, tenure-track teachers and scholars.  Such research yields clean and low-energy production of biofuels that provide benefits from nature instead of contending with it.