For the Fourth Annual Electric Aircraft Symposium on April 23 and 24 in Rohnert Park, California, Dr. Jonathan Trent was an ideal kickoff speaker. His work with NASA Ames Research Center on converting pollutants into algae-based biofuels could have long-term effects on cleaning up our planet’s air and water, and provide byproducts that will help to feed the 900,000,000 who go hungry every day.  As he notes, “Unless we go electric, we must move to low-carbon fuels.”

The problem is not a new one.  As musical satirist Tom Lehrer wrote in his 1960’s plea for emissions control, “Pollution, Pollution,”

“The breakfast garbage that you throw in to the bay/They drink as lunch in San José.”

Dr. Trent, a PhD. in Marine Biology, has a solution called OMEGA, “Offshore Membrane Enclosure for Growing Algae.” Explaining that the wastewater treatment plant on Treasure Island in San Francisco Bay dumps 300,000 gallons of effluent each day, Trent notes that capturing that waste and performing a series of processes over a three to 10-day period would provide a significant amount of algae for further processing into biofuels such as ethanol or biodiesel. Extrapolating that number, he notes that 1.9 billion gallons of sewage are dumped into the Pacific between San Francisco and San Diego daily, and 11 billion gallons over the US coast.  This waste alone, impinging on sea life and the health of the oceans, could supply one-third of all United States energy needs.

According to NASA, “The OMEGA system consists of large plastic bags with inserts of forward-osmosis membranes that grow freshwater algae in processed wastewater by photosynthesis. Using energy from the sun, the algae absorb carbon dioxide from the atmosphere and nutrients from the wastewater to produce biomass and oxygen. As the algae grow, the nutrients are contained in the enclosures, while the cleansed freshwater is released into the surrounding ocean through the forward-osmosis membranes.” 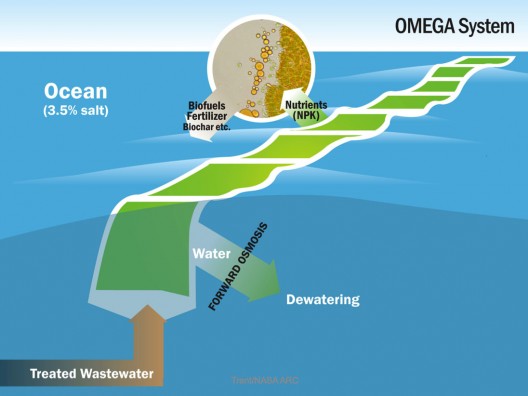 Sewage entering at bottom left is transformed into algae with benefits to sea, air, and land

NASA’s video of the process is even more instructive and allows a good view of Dr. Trent at work.

Sunlight and waves can be used to power the simple system, adding to its luster as a low-impact process.  This low-energy solution for fuel creation does not require arable lands or food resources, two complaints faced by corn and other plant-based biofuel solutions.  It has the added advantage of sequestering carbon during the process, and remediating former “dead zones” in the ocean.  Byproducts can be converted not only to fuel, but to fertilizer and foodstocks for animals. This win-win solution has been embraced by the United States Navy, which flew an F-18, the “Green Hornet,” on the first supersonic flight using biofuels on Earth Day, April 22.

Anticipating a big commercial demand for OMEGA, NASA has licensed the process to Algae Systems, LLC of Carson City, Nevada, which plans to create a series of biofuel refineries.