Another pair of heavy-duty partners, Ballard Power Systems of Canada, normally powering city buses; and Boeing, through its subsidiary Insitu, team to create and fly viable fuel cell systems for drones.  Insitu’s ScanEagle is already a world-beater for range and endurance, but it uses an internal-combustion engine (ICE), that although frugal, is not entirely green. 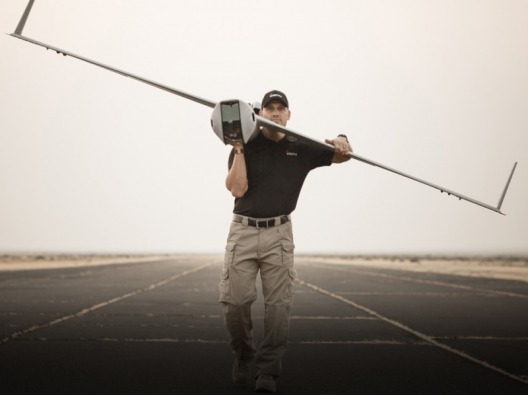 Ballard’s Protonex® fuel cell systems have been used for over a decade to power drones of varying sizes, but all with ranges and endurance equaling or exceeding most of their ICE cousins.

In a December 22 press release, Protonex announced improvements in manufacturing and applications of their newest technology.  “The next generation fuel cell propulsion system announced today delivers a number of important advances: increased power density, resulting from a new membrane electrode assembly (MEA) design; reduced cost, resulting from a combination of new MEA and one-step fuel cell stack sealing process; and extended lifetime. The increase in rated power, without any appreciable increase in size or weight, is a particularly significant development for UAV applications.”  The unit tested on Insitu’s ScanEagle is a 1.3-kilowatt system.

A presentation by Paul Osenar, President of Protonex, highlights the advantages claimed by his company’s fuel cells over batteries and ICE’s.  He claims fuel cells have two-to-five times the energy density  of LiPO batteries.  They extend mission times and provide more data to the user, partly because they can provide on-board power for data acquisition, computing and communication requirements.  They offer greater than five times mean time between failure (MTBF) over ICE power systems.  This leads to lower operational costs and better platform reliability. 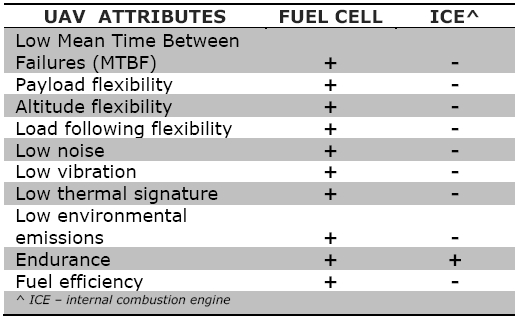 In applications requiring persistence and the ability to provide near-real-time data delivery, such performance will be necessary and appreciated.

Fighting Back Against Wildfires 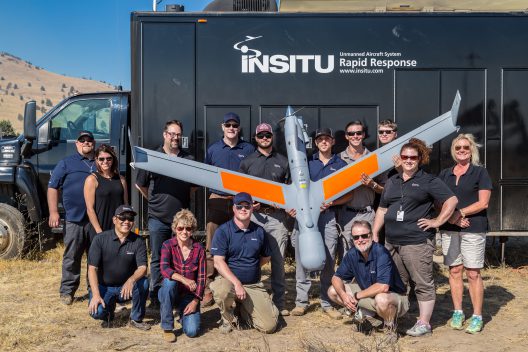 In October, the public saw a test of the combined drone and fire watch system at the Warm Springs, Oregon, Federal Aviation Administration (FAA) Unmanned Aerial System (UAS) Test Range, a member of the Pan Pacific FAA UAS Test Site for commercial UAS testing.  Out of seven such test sites, it’s one of three in Oregon, including the Pendleton and Tillamook test areas.  Powered by an internal combustion powerplant, the ScanEagle was able to show off Insitu’s Mark 4 launcher and SkyHook recovery system. 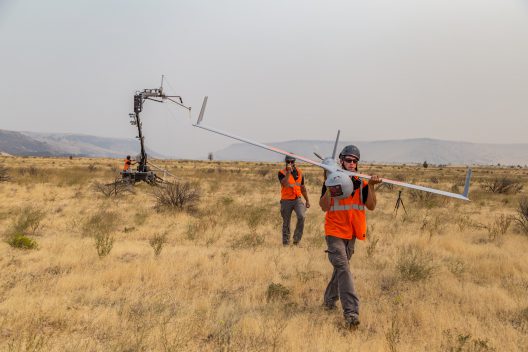 Bringing ScanEagle back after a successful SkyHook retrieval

These abilities were demonstrated shortly after successful acceptance tests in the 49,000 acre Eagle Creek fire in Oregon’s Columbia Gorge.  Mark Bauman, Vice President and Co-General Manager of Insitu Commercial explained his feelings about the fire that burned within sight of Insitu’s Hood River, Oregon plant.  “Throughout the difficult Eagle Creek wildfire, our thoughts have been with our friends and neighbors impacted by this unfortunate event.  We stand prepared to assist local authorities with ongoing operations in any way we can, and we extend our gratitude to all of those working hard to contain the fire.”

Accurate location of spot fires and the ability to see through smoke, haze and the dark of night enhanced ScanEagle and Esri’s Geographic Information System ArcGIS software’s usefulness to those on the ground.  These capabilities have broader market potential.

In a market that could grow from the quarter-million commercially-deployed drones now to 2.5 million by 2021, the abilities shown in firefighting will be available for agriculture, construction, environmental management, urban and rural surveying, mining, emergency response and law enforcement.