When you come to a fork in the road, take it.  Yogi Berra

Technology and new products continue to enhance the development and realization of electric and solar aircraft.  Two approaches to batteries, both of which explore roads less taken, have some promise for aircraft use.

Shine Some Light on It

What if your battery could be recharged just by exposing it to light?  A team of South Korean researchers, affiliated with UNIST (Ulsan National Institute of Science and Technology) has developed a single-unit, photo-rechargeable portable power source based on high-efficiency silicon solar cells and lithium-ion batteries (LIBs).  Rechargeable under solar or artificial light, the unit could power other electronic devices, “even in the absence of light.” 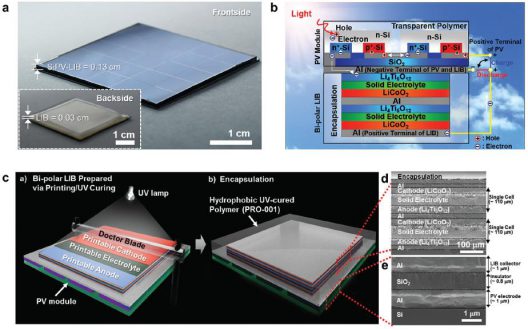 Professor Lee says, “This device provides a solution to fix both the energy density problem of batteries and the energy storage concerns of solar cells. More importantly, batteries have relatively high power and energy densities under direct sunlight, which demonstrates its potential application as a solar-driven infinite energy conversion/storage system for use in electric vehicles and portable electronics.”

More compact than separate PVs or LIBs alone, the single unit “exhibits exceptional photo-electrochemical performance.” It can charge in less than two minutes with a  (photo-electric conversion/storage efficiency of 7.61 percent.

Fabricated from a solid-state LIB with a bipolar cell configuration directly on the aluminum (Al) electrode of a c-Si PV module through an in-series printing process.  The seamless arrangement acts simultaneously as a current collector of the LIB, and as an electrode for the rear-electrode type solar cells. This direct connection and single Si substrate allow the battery to be charged without the loss of energy.  It also allows simplified manufacturing of the device.

Under sunlight, The SiPV–LIB device charged in under two minutes, holding that charge even in 60°C (140°F) temperatures and at a low light intensity of 8 mW/cm2 (milliwatts per square centimeter), the light in a dimly-illuminated room.  This ability to hold a charge would allow such a material (considerably larger than a credit card) to be applied to top and bottom surfaces of wings, for instance.  Still in development, the device, if it could be expanded to larger applications, could be a significant material for vehicles of all types.

Professor Lee concludes, “The SiPV–LIB device presented herein shows great potential as a photo-rechargeable mobile power source that will play a pivotal role in the future era of ubiquitous electronics,”

Fill It Up with Electrolytes

What if you could fill up your electric vehicle just as you pump gasoline into your fossil-fuel burner today?  Purdue researchers might have an “instantly rechargeable” method that is safe, affordable and environmentally friendly for recharging electric and hybrid vehicle batteries that anyone who tops up their own tank can perform.

The technique eliminates those lengthy recharging times and allows the use of existing infrastructure (slightly modified).  John Cushman, Purdue University distinguished professor of earth, atmospheric and planetary science and a professor of mathematics, has co-founded Ifbattery LLC, (IF-battery) to further develop and commercialize the technology.

Noting the growing sales of electric and hybrid vehicles, Cushman explains, “Current electric cars need convenient locations built for charging ports.  Eric Nauman, co-founder of Ifbattery and a Purdue professor of mechanical engineering, basic medical sciences and biomedical engineering, adds, “Designing and building enough of these recharging stations requires massive infrastructure development, which means the energy distribution and storage system is being rebuilt at tremendous cost to accommodate the need for continual local battery recharge.  Ifbattery is developing an energy storage system that would enable drivers to fill up their electric or hybrid vehicles with fluid electrolytes to re-energize spent battery fluids much like refueling their gas tanks.”

At this point, things depart the conventional fueling analogy.  Gasoline or Diesel fuel, consumed in the customer’s vehicle, fouls the atmosphere and doesn’t return to its point of origin.  In Purdue’s approach, “the spent battery fluids or electrolyte [would] be collected and taken to a solar farm, wind turbine installation or hydroelectric plant for re-charging.”

Cushman explains, “Instead of refining petroleum, the refiners would reprocess spent electrolytes and instead of dispensing gas, the fueling stations would dispense a water and ethanol or methanol solution as fluid electrolytes to power vehicles.” 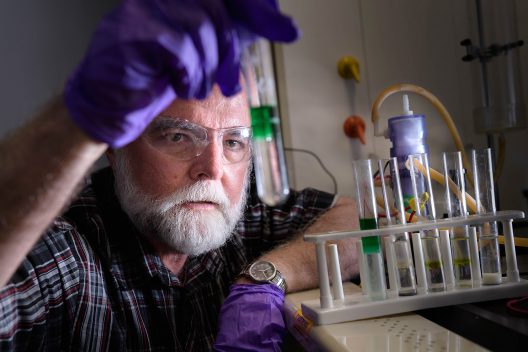 The added step doesn’t seem to faze the co-founder.  “Users would be able to drop off the spent electrolytes at gas stations, which would then be sent in bulk to solar farms, wind turbine installations or hydroelectric plants for reconstitution or re-charging into the viable electrolyte and reused many times. It is believed that our technology could be nearly ‘drop-in’ ready for most of the underground piping system, rail and truck delivery system, gas stations and refineries.”

Recharging stations would need to be centrally located in clusters of such refueling stations to make the two-way trip with the fluids economically feasible.  Perhaps local wind or solar farms could reduce the distances the fluids would travel.

Other flow batteries exist, according to Mike Mueterthies, Purdue doctoral teaching and research assistant in physics and the third co-founder of Ifbattery.  For instance, NanoFlowCell in Switzerland fields the Quant and Quantino cars fueled by two different types of salt water.  Mixing the two in a fuel cell generates electricity to run the cars’ motors, but some type of post processing still needs to take place after the cars have exhausted the energy potential in the water.

The Ifbattery system is unique, according to Meeterthies, in hot having a component that tends to be the Achilles heel of most flow batteries.  “…We are the first to remove membranes which reduces costs and extends battery life.”

Cushman enumerates other benefits of membrane-free batteries.  “Membrane fouling can limit the number of recharge cycles and is a known contributor to many battery fires.  Ifbattery’s components are safe enough to be stored in a family home, are stable enough to meet major production and distribution requirements and are cost effective.”

Ifbattery licensed part of the technology through the Purdue Research Foundation Office of Technology Commercialization and has developed patents of its own. The company is a member of the Purdue Startup Class of 2017.