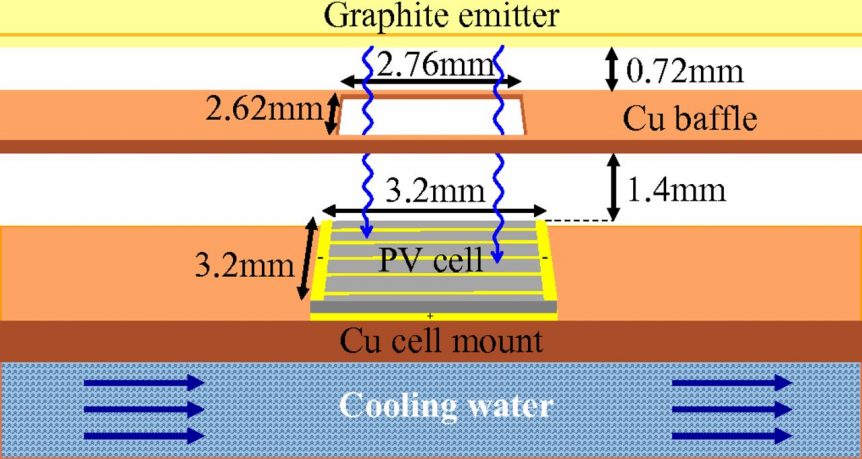 Researchers at University of California at Berkeley announced a record in thermophotovoltaic efficiency, now at 29 percent, but with a few tweaks, soon to be at 50 percent.  This is great news for small drones, which could stay up for days, but possibly not a be-all, end-all for larger, more conventional electric aircraft.  Let’s examine the potential and the pitfalls involved.

The researchers’ “groundbreaking physical insight” and “novel design” applies thermophotovoltaic principles that are “an ultralight alternative power source.”  Eli Yablonovitch, professor of electrical engineering and computer science (EECS), wrote in a paper published in the Proceedings of the National Academy of Sciences, ““Thermophotovoltaics are compact and extremely efficient for a wide range of applications, from those that require as little as 100 watts, [such as] a lightweight unmanned aerial vehicle, to 100 megawatts, [providing] electricity for 36,000 homes. In comparison, a 100-megawatt combined cycle power plant is massive,”

Expanding on work he and his students published in 2011, Yablonovitch took a counter-intuitive approach to making more efficient solar cells.  Past efforts focused on increasing the number of photons that a cell absorbs. The paper notes, “Absorbed sunlight in a solar cell produces electrons that must be extracted from the cell as electricity. Those electrons that are not extracted fast enough, decay and release their energy. If that energy is released as heat, it reduces the solar cell’s power output. Miller’s calculations showed that if this released energy exits the cell as external fluorescence, it would boost the cell’s output voltage.”

It’s All Done with Mirrors 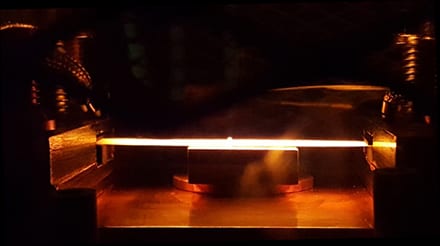 “This is the central counter-intuitive result that permitted efficiency records to be broken,” Yablonovitch says.  In current efforts,   Heat generated by the absorption of photons lowers the efficiency of the solar cell – so Berkeley researchers exploit the heat rather than trying to get rid of it.

They place a “highly reflective” mirror within the cell and reflect low-energy infrared photons back to their source, extracting the otherwise wasted energy these photons possess.  It increases the voltage of the cell, but also generates heat at around 1,207° C (2204.6° F).  The current 29.1-percent efficiency can be raised to 50-percent, according to researchers.

It Won’t Fly Your Airplane – Yet

About 93 Watts of solar energy fall on each square foot of the earth’s surface, according to answers.com.  That’s if the sun is directly overhead and the sky is clear, of course.  Engineers use an average of 1,000 Watts per square meter for calculating solar panel sizes.  Let’s look at factors that lower that number. 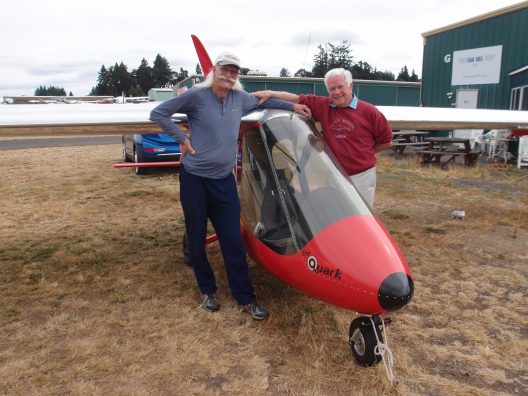 Martin Koxxy (l) and Richard Steeves with Martin’s Quark e-Gull.  Both their e-Gulls are powered by Zero electric motorcycle motors

As an example, friends Richard Steeves in Madison, Wisconsin and Martin Koxxy built, own and fly Zero Motorcycle-powered e-Gulls designed by Mark Beierle.  They have investigated putting solar cells on the wings (both use the 28-foot version offered by Beierle).  Their aircraft have about 133 square feet of wing area.  120 square feet of 29.1-percent efficient solar cells would collect 11,160 Watts (11.16 kilowatts) and under the best possible conditions generate 3.25 kilowatts.  Your editor has seen Richard’s rough calculations for the e-Gull, showing the 28-foot span requires about 8.1 kilowatts to remain in level flight at its best lift:drag ratio.  (We’ll have an expanded and updated set of calculations soon.)

50-percent efficient solar cells promised by Berkeley would go a long way toward increasing range for these small machines, but would not keep them in sustained flight.  If the design’s liquid cooling can contain the high heat these cells generate, they would be very helpful in extending the range of aircraft, automobiles, and boats.  Smaller machines would seem to have an advantage at this point in the development cycle.