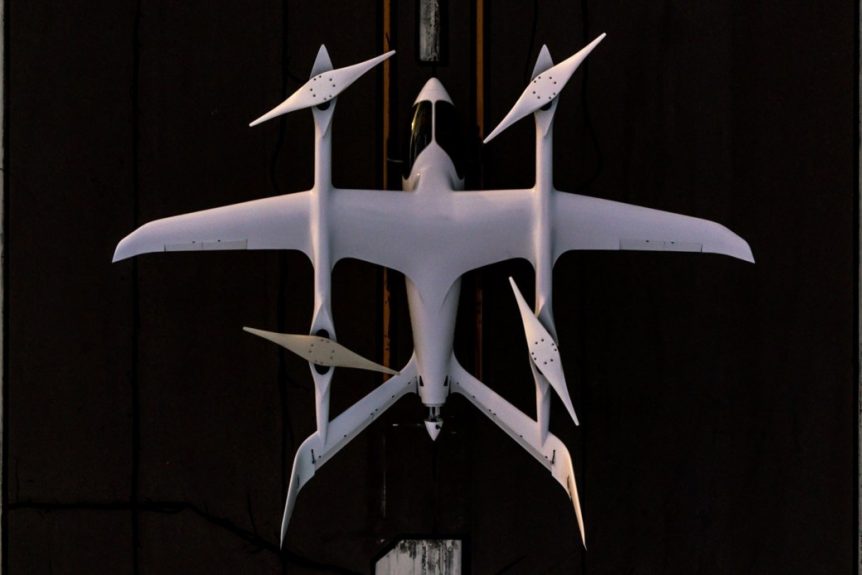 A new aircraft’s first takeoff is usually performed under its own power, but the recent trip by Beta Technologies’ just-revealed Alia eVTOL (electric Vertical Take Off and Landing) aircraft was externally powered.  A 30-minute lift across Lake Champlain from Alia’s birthplace in Burlington, Vermont to its test site in Plattsburgh, New York was uneventful, but spectacular nonetheless.

Hauled 100 feet below a Sikorsky S-61N from Quebec-based Helicarrier, the all-white, four-rotor Alia “crossed over the northern end of Burlington. With streets along its route blocked off by police, [it] then flew at a stately pace across the lake, usually just a few hundred feet above the surface of the water,” according to Vertical.com.

Helicarrier, besides sharing a named with a Marvel Comics flying aircraft carrier and command center (fictional), performs real-life heavy lifts on anything up to 10,000 pounds.  In the case of the Alia transport, the lift was extra heavy based on the value of the precious cargo.  According to the Vertical.com article, “Being forced to activate the emergency release and dump it (“the priceless prototype”) in the lake if something went wrong — something Helicarrier has never had to do — would set the program back at least a year.”

Pilot Aaron Lighter flew the mission, with aptly-named company president Fred Carrier acting as spotter.  Lighter explained, “It’s not very often we fly brand-new, experimental, multi-million-dollar projects like this. So, yeah, this is outside our scope a little bit. But at the end of the day it’s a piece of equipment on the end of a long line, and we are very capable of getting it there safely.” 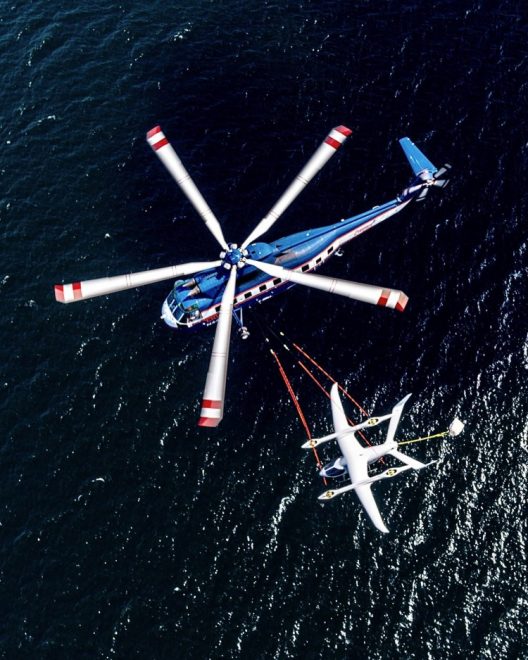 Lighter and Carrier took pains to ensure that the 50-foot span Alia remained stable in its crossing, and since it has a designed stall speed of 90 knots, to keep the transit speed “well below that at 40 knots.”  Most of the trip was flown with Alia 100 feet above ground or lake level, with the intent of accomplishing a quick touchdown in case of trouble.

Rigging involved removing the four hover motors from Alia’s outriggers and setting anchor hooks in their place.  The craft was set with a three-degree nose-down attitude to keep it from lifting during the trip.  After all local traffic was shut down in affected areas the trip went off “without a hitch.”  See the full story on Vertical.com.

When Alia has its unique propellers mounted and undergoes test flights, it will be able to take advantage of Beta’s recharging stations.  Designed as a stand-alone system, each station will include a pilot lounge and sleeping accommodations with “en-suite bath and full-size shower to help the pilots recharge between missions.”  And who wouldn’t like the Mondrian-style walls in the bathrooms?

The cargo-container-based site feature an on-site maintenance and repair workshop, secure and climate-controlled warehouse units, battery storage areas, solar arrays to help recharge batteries economically, and a backup generator to make the site self-sufficient if the grid cannot supply electricity.  This is doubly important because of the primary mission for Beta Technology’s primary backers: the delivery of organs for transplants for United Therapies, and the battlefield logistical support for the U. S. Air Force’s Agility Prime program.

Inspired by the Arctic Tern according to company founder Kyle Clark, Alia’s long, tapered wings enabling the bird to make an annual migration of “60,000 to 82,000 [kilometers] (roughly 37,000 to 51,000 miles).”  Alia’s overall configuration is graceful, and its cargo hold can contain 200 cubic feet of materiel – equivalent to about two Chevrolet Tahoes. Optionally, it can carry six passengers or some combination of cargo and people.   A smaller proof-of-concept vehicle, the Ava, went through considerable testing, and Alia followed with tethered tests before being shipped to it New York base.

Simpler in concept than the Ava testbed which preceded it, we will be happy to see how the five motors, four rotors, and pusher propeller work together to make this lovely design fly.