Envia, a startup battery company in Newark, California, has announced a much-anticipated breakthrough in lithium-polymer storage cell energy density. Although tested to 300 charge/discharge cycles, the new battery should show at least 1,000 successful cycles before we get too excited.

Excitement will build, though, as the announced 400 Watt-hours per kilogram doubles the current energy density standard for lithium batteries. This would reduce a Leaf’s battery pack from about 600 pounds to 300 pounds, or keeping the same weight, double the car’s range to about 250 miles. Dr. Brien Seeley points out that the Green Flight Challenge-winning Pipistrel G4 could have traversed 400 miles with a reserve on such batteries.

Testers compared the Envia cells to Panasonic’s NCR18650A, which claims 3,100 milli-Amp hours capacity, an average of 3.6 Volts, and a weight of 45.5 grams. This could give these model cells an energy density of 245 Wh/kg. Naval testing substantiated the manufacturer’s claim of 400 Wh/kg, a 63-percent increase over the Panasonic cells.

Envia shows a pouch-type cell, while the Panasonic cell is cylindrical, 18.6 millimeters in diameter and 65.2 millimeters in length. Whether these form factors make any difference in output is questionable, but a true apples-apples comparison would remove any doubt about such matters.

Envia anticipates that commercial production will promote practical electric vehicles. When commercialized, “This 400 Wh/kg battery is expected to slash the price of a 300‐mile range electric vehicle by cutting the cost of the battery pack by more than 50 percent,” with a claimed cost of $125 per kilowatt-hour.  Compared to the $400 per kilowatt-hour charged for lithium-ion batteries in late 2010, that would be an even greater differential.

Such results are partly attributable to Envia’s development of new silicon-carbon anodes, cathodes and their own proprietary electrolyte. This coordinated push on all these technologies gives the resulting product the benefits of improvements in each active part of the battery.  Others have taken note.  General Motors on January 26 announced it would invest $7 million in Envia’s product development and the Advanced Research Projects Agency—Energy (ARPA–e) has already awarded a $4 million grant to Envia. 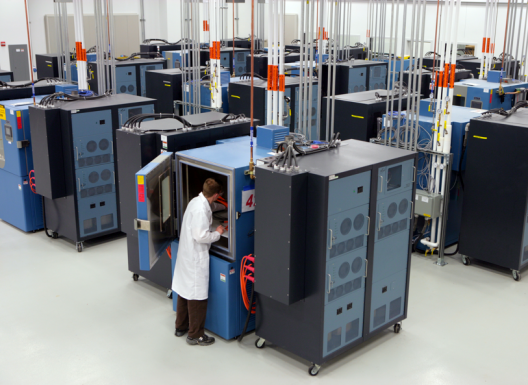 According to Scientific American, “the Envia technology builds on work done at Argonne National Laboratory (ANL) that found that including manganese in a mix of materials for the cathode—the electrode to which the lithium ions flock—better energy densities could be achieved. The team then switched focus to the anode—the electrode from which lithium ions flow to produce the electric current—and boosted its performance by incorporating silicon along with the typical graphite.”

These technologies help the battery resist the swelling and contraction that shorten electrode life, and the thin construction reduces the possibility of “thermal runaway,” in which batteries might overheat to the point of combustion.

ANL’s press release praised the cooperative effort between the Laboratory and Envia. “’At Argonne, we are proud that our energy research is giving powerful support to the U.S. automobile industry and revitalizing battery production in this country, creating good new jobs here at home and increasing our economic competitiveness world-wide,’ said Jeff Chamberlain, who heads Argonne’s Energy Storage Initiative. ‘The transfer of this technology to a Silicon Valley startup like Envia demonstrates the extraordinary impact and value of the Department of Energy’s investment in basic research, and shows the very real contribution the national laboratories make to our country’s prosperity.’”

According to ANL, GM, LG Chem, Ltd., BASF and Toda Kogyo (a purveyor of iron oxide) have also licensed the Argonne-developed technology.

We can only hope that commercial development and its benefits to EV technology will follow shortly.