At Germany’s Karlsruhe Institute of Technology (KIT), researchers have developed a new concept for rechargeable batteries.  Based on a fluoride shuttle – the transfer of fluoride anions between the electrodes – it promises to enhance the storage capacity reached by lithium-ion batteries by several factors.  Operational safety is also increased, as it can be done without lithium. The fluoride-ion battery is presented for the first time in a paper in the Journal of Materials Chemistry by Dr. Maximilian Fichtner, Head of the Energy Storage Systems Group, and Dr. Munnangi Anji Reddy. 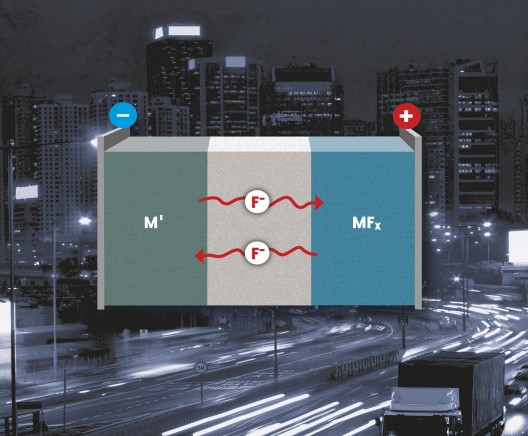 “In search of new concepts to build batteries with high energy densities, electrochemical cells based on metal fluorides may be promising. Herein, we report the demonstration of secondary battery cells based on fluoride shuttle.  In fluoride ion batteries, [a] fluoride anion (negatively-charged ions moving toward the positive electrode) acts as charge transfer ion between a metal/metal fluoride pair where it will react with metal or evolve from metal fluoride depending on the flow of current.”

Presenting on day two of the Detroit Battery Show, the researchers gave promise to the concept of a radically lighter, more powerful cell type.

The researchers noted that “Lithium-ion batteries are applied widely, but their storage capacity is limited. “  Future mobile systems (airplanes, for  instance), will need lighter, more energy dense batteries to be viable.

KIT’s press release explains further.  “Metal fluorides may be applied as conversion materials in lithium-ion batteries. They also allow for lithium-free batteries with a fluoride-containing electrolyte, a metal anode, and metal fluoride cathode, which reach a much better storage capacity and possess improved safety properties. Instead of the lithium cation (positively-charged ions moving toward the negative electrode), the fluoride anion takes over charge transfer.  At the cathode and anode, a metal fluoride is formed or reduced.  ‘As several electrons per metal atom can be transferred, this concept allows to reach extraordinarily high energy densities – up to ten times as high as those of conventional lithium-ion batteries,’ [says] Dr. Fichtner.

“The KIT researchers are now working on the further development of material design and battery architecture in order to improve the initial capacity and cyclic stability of the fluoride-ion battery. Another challenge lies in the further development of the electrolyte: The solid electrolyte applied so far is suited for applications at elevated temperatures only. It is therefore aimed at finding a liquid electrolyte that is suited for use at room temperature.”

Supporting data for KIT’s findings can be found here.