Unveiled at the Dubai Air Show this week, the collaborative effort between Stratasys and Aurora Flight Sciences is the largest and fastest 3D-printed aircraft so far.  With a 9-foot wingspan and weighing 30 pounds, the unmanned aerial vehicle is also the first jet aircraft to be made through additive manufacturing. 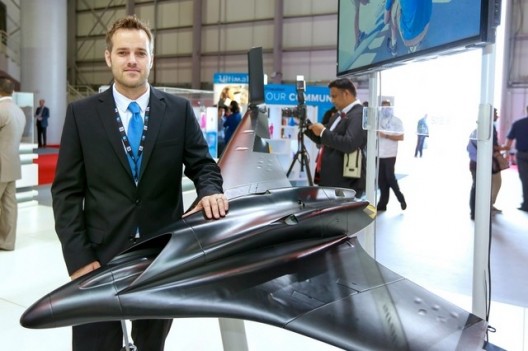 80 percent by weight was made through the advanced process, the rest consisting of the engine, electronics and tires.  Because the airplane was designed in a collaborative computer aided design process, the parts could be printed in Stratasys’ facilities even though they were designed primarily in Aurora’s Virginia headquarters.

Besides saving weight, the process saves time, the complete aircraft going from initial idea to first flight in under nine months.

Scott Sevcik, aerospace and defense business development manager at Stratasys, and a recent presenter at the ninth annual Electric Aircraft Symposium, says, “Aurora wanted to look at the feasibility of producing a vehicle tailored to unique mission requirements.  They identified a set of performance parameters, then designed the outer mold line of a vehicle that would be ideal for meeting those mission parameters.”

Scott explained, “We looked at that outer mold line and asked, what is the optimum structure internally.  Instead of the ribs and spars of a more conventional structure, “a more organic structure” allowed light weight, stiffness and uncompromised outer geometry.

The 22 pounds-thrust King Tech turbine pushes the craft to 150 mph, but only for about five minutes – the endurance allowed by the small fuel tank.   Since the thrust vectoring metal exhaust nozzle had to withstand high temperature blasts, direct metal laser sintering (DMLS).  Laser sintering was used for the highly complicated fuel tank.  “It is conformal to the engine, so the turbine actually slides right through the fuel tank,” Sevcik explained. “It’s fully sealed, with complex pathways printed through the tank for wire routing.” 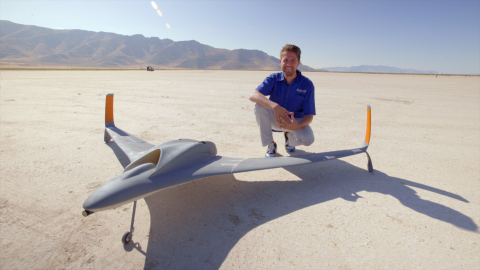 Aurora’s Dan Campbell with UAV in Utah desert. Stratasys used FDM, fused deposition modeling, to make the wings and fuselage, and three other techniques to make the remaining parts.

Sevcik sees the future possibilities of “tightly coupled” design and manufacturing, including larger scales of aircraft, optimum interior shapes and improved speed in making complex parts. “So vehicles can be tailored to mission requirements and be of ideal performance, rather than having a basic performance applicable to multiple missions.”

Sevcik and Dr. John Langford, CEO of Aurora, didn’t mention this latest breakthrough at EAS IX in May, but then the rapid pace of design and creation would barely have begun then.  At that point, Sevcik talked about making one-piece, light passenger seats for Airbus, barely a hint of what the companies would accomplish in the next several months.

Up to this point Southampton University in England had printed and flown an electrically-powered two-meter wingspan craft with much lower weight and performance.  This development is a great leap forward.