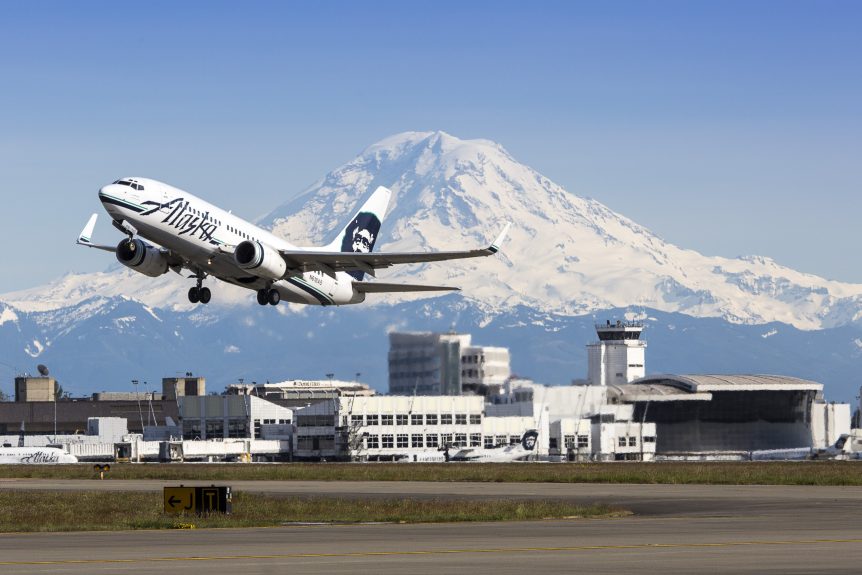 We’ve looked at an array of different biofuel sources ranging from used cooking oil and algae to farm and municipal waste.  This is essential as the percentage of airline emissions becomes a bigger part of our overall greenhouse gas situation.   The Guardian reports, “A 2017 estimate said air travel accounted for 2.5% of all carbon dioxide emissions, with the total emissions expected to quadruple by 2050.”We’ll look here at how some of the early efforts have panned out and examine a late-breaking surprise or two.

According to the Guardian, “A Qantas plane powered partly by mustard seeds has become the world’s first biofuel flight between Australia and the United States, after landing in Melbourne on [January 30, 2018].” 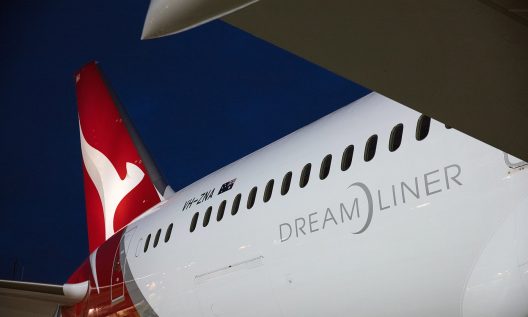 A Qantas 787-9 Dreamliner made the journey from Los Angeles to Melbourne using a a blended fuel 10% derived from the brassica carinata, an industrial type of mustard seed that functions as a fallow crop. Photograph: Brent Winstone/PR IMAGE

A major test, the 15-hour flight used a blended fuel 10-percent of which came from the brassica carinata, a mustard seed used as a fallow crop between regular crop cycles.

Qantas’ Boeing Dreamliner 787-9 “Reduced carbon emissions by 7 percent compared with the airline’s usual flight over the same LA to Melbourne route. Compared pound for pound with jet fuel, carinata biofuel reduces emissions by 80% over the fuel’s life cycle,” according to the Guardian.  Qantas has flown with biofuels since its first trials in 2012, using a 50-percent blend of used cooking oil.

Daniel Tan, an agriculture expert from the University of Sydney, said mustard seed could double as a valuable crop and a source of sustainable fuel for farmers.

“Almost within a day after harvesting, they can press the oil out in their own shed and use it straight into their tractors,” he said.  “Basically it’s good for growing, and also farmers can also use it. If they grow wheat every year it’s not good for the soil. They can grow mustard seed in between the wheat crops, every second or third year, press the oil and use it locally or export it for use in aviation fuel.  One hectare (about 2.5 acres) of the crop can be used to produce 400 liters of aviation fuel or 1,400 liters of renewable diesel.

“A lot of the biodiesel now being processed is actually from waste oil from places like fish and chip shops. A lot of these oils can be processed, but the problem is that they can’t get consistent supply. The big problem with the biodiesel industry in Australia is mainly the continuity of supply.”  Qantas hopes to use biofuels, supplied by U. S. company SG Preston, on all Los Angeles-based flights by 2020.

Other Airlines, Other Approaches

Other airlines, perhaps with less faith in the power of mustard seeds to move large jets, are using a wide array of plant and waste materials to produce jet fuel.

Alaska Airlines, Boeing and SeaTac Airport have been cooperating on using farm and municipal waste to produce renewable jet fuel, but Boeing’s efforts have stretched as far as the United Arab Emirates, where a plan to develop halophyte plants (which can thrive in salt water) continues with the Khalifa University.  Boeing also works with partners in biofuel development on six continents, a sign of deep involvement and earnest commitment.

A letter from Paul McElroy, with Boeing Commercial Airplanes Environment Communications, explains the company, “led the approval of the first pathway and that fuel has been flown successfully on thousands of commercial flights. Boeing continues to work tirelessly within ASTM, the international standards body… develop and commercialize new sources of aviation biofuel.”

His letter notes, “Boeing is now partnering with the U.S. Federal Aviation Administration and other stakeholders to gain approval for a biofuel called HF-HEFA (high freeze-point-hydrotreated esters and fatty acids), which is produced from fats, oils and greases.  Known as ‘green diesel’ when used in ground transport, global production capacity exceeds 1 billion gallons annually. To verify this fuel’s performance and characteristics, Boeing tested two blends of HFHEFA on its ecoDemonstrator program’s 787 and 757 flight test airplanes. Approval of this fuel would make a price-competitive sustainable biofuel available that could meet more than 1 percent of global aviation fuel supply needs.” 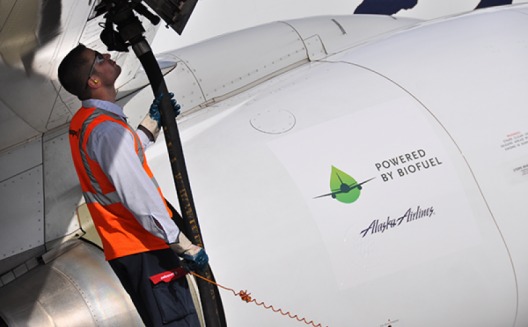 Alaska Airlines, Boeing, and SeaTac have partnered to provide an infrastructure to supply biofuels to all airlines flying from Seattle

Alaska Airlines wants to lead in these ambitions.  “As an airline, we require large volumes of fuel to run our business. While technology and operational flying efficiencies have reduced the amount of fuel we use and the associated emissions, they are not enough to lower emissions to achieve industry-wide goals of carbon neutral grown by 2020, and a 50% reduction in emissions by 2050, compared to a 2005 baseline.  In 2016, They partnered with Gevo on three commercial flights using alcohol-to-jet fuels, completed two

“Alaska was the first domestic airline to fly multiple scheduled flights using aviation biofuel, and we have committed to use only aviation biofuels that meet stringent sustainability criteria.”  Alaska’s 2020 goal of using sustainable aviation biofuel in at least one airport is a work in progress, with several mileposts showing the airline’s progress.  In 2016, Alaska partnered with Gevo and completed three biofuel flights using fuel produced by the alcohol-to-jet (ATJ) process.  They flew twice on biofuel that used corn as a feedstock, and that November, flew from Seattle to Washington, D. C. on ATJ made from post-harvest forest residues.

Alaska also partnered with Boeing and the Port of Seattle to conduct a $250,000 biofuel infrastructure feasibility study, a major step towards bringing biofuels to all air carriers at Sea-Tac Airport.

The Port of Seattle encourages further development of SAF, with a goal of having all commercial flights powered by sustainable fuels by 2028.  The Port sees its roles in providing infrastructure, financing, land use, advocacy and partnerships as crucial to the plan’s success.  A note on financing shows assistance from some heavy hitters in the environmental world.    The Port reports, “In 2017, Carbon War Room/Rocky Mountain Institute and SkyNRG investigated the feasibility of using different airport revenue streams at Sea-Tac to help bring down the cost to all airlines compared to petroleum jet fuel, as well as support the build-out of fueling infrastructure.  The report identified a range of funding sources, and included ways an airport could be involved without directly paying for fuel.”

Other airlines have similar goals and timelines.  United Airlines, in a letter expressing its goals, claims to have improved its fuel efficiency by 45 percent since 1990, “but that’s only the first step.”  United is working toward “a collective industry goal of 1.5 percent average improvement of annual fuel efficiency through 2020, carbon neutral growth beginning in 2020 and a 50 percent reduction airline CO2 emissions by 2050.  United hopes not only to be a good corporate citizen but to guard against oil price instability.  Its efforts led the Natural Resources Defense Council (NRDC) to name United a “Leading Airline for having a strong range of commitments and supply chain implementation.”

Since 2015, United partnered with Fulcrum BioEnergy, a company pioneering conversion of waste and household trash into low-cost, sustainable aviation fuel.  United will have Fulcrum SAF refineries near all its U. S. hubs, producing nearly one-billion gallons in their first ten years of operation, nearly three times the amount United uses yearly.  This will keep trash out of landfills, lower United’s emissions, and probably power other operation’s fuel needs.

Irina Slav, writing for the industry watchdog Oilprice.com, tells us, “The International Air Transport Association has set an ambitious goal for its members: transporting a billion passengers on flights using biofuel by 2025. The goal is a demonstration of IATA’s efforts to help cut carbon dioxide emissions. The aviation industry is a major source of these, after all.”

She goes on to explain that although biofuels might cut into Big Oil’s profit margins, such alternatives will not grow big enough to be a major threat to the oil business.   More expensive than regular jet fuel, some biofuels price themselves out of a very competitive market.

The International Air Transit Association (IATA) backs the drive to promote biofuels.  Chief Executive and Managing Director Alexandre de Juniac says, “We want 1 billion passengers to have flown on a SAF (Sustainable Aviation Fuel)-blend flight by 2025. That won’t be easy to achieve. We need governments to set a framework to incentivize production of SAF and ensure it is as attractive to produce as automotive biofuels.”  IATA estimates, though, that only half a billion passengers might fly on “biofueled” flights by the target date.   You can see the organization’s biofuel report here.

Ms. Slav explains that loan guarantees and capital grants might help if sometimes skeptical banks will cooperate.  The industry hopes to trend toward carbon neutral growth and reduce net emissions.  Currently, emissions average between 114 grams of CO2 per kilometer on long-haul flights and 260 grams per kilometer for shorter flights.  IATA suggests biofuels could cut this by as much a 80 percent.  Ms. Slav concludes that the economics will be the tricky part, with producers concentrating on reducing costs and governments providing incentives and probably regulation.  Look for higher fares and greater Big Oil activity in biofuels, she cautions.

With Zunum and Airbus coming forward with medium-size, medium-range single-aisle airliners, and Pipistrel and the MAHEPA organization coming forward with hybrid small aircraft, biofuels will have a promising place in near-future aviation.  We have only shown a few players here, with much more to come on the national and international front in the near future.