Brazil may become a central research and manufacturing site for biofuels, with Boeing and Embraer opening a joint sustainable biofuel research center, something that will rely on Brazil’s fertile land to supply non-food plants with which to make jet fuel.  Working in the Boeing-Embraer Joint Research Center in the São José dos Campos Technology Park, opened in January 2014, the companies are continuing to “focus on technologies that address gaps in creating a sustainable aviation biofuel industry in Brazil, such as feedstock production, techno-economic analysis, economic viability studies and processing technologies.” 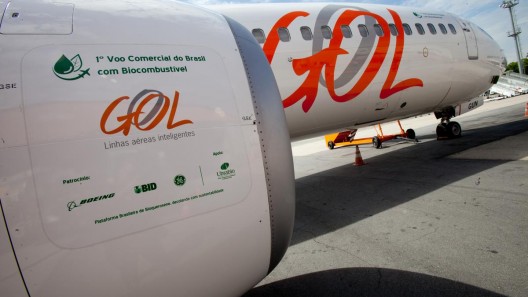 Boeing’s Research & Technology-Brazil (BR&T-Brazil) Center, one of the company’s six international advanced research centers, leads the collaboration with Embraer and works with Brazil’s research-and-development community “to grow Brazil’s capabilities and meet the country’s goals for economic and technology development while supporting the creation of innovative and affordable technologies for Boeing’s business units.”

This is one of several biofuel development projects in the U. S., the Middle East, Africa, Europe, China, Japan, Southeast Asia and Australia.  Working with a detailed roadmap called “Flightpath to Aviation Fuels in Brazil,” the partners signed a 2014 collaboration agreement pledging to jointly conduct and co-fund research and share intellectual property developed through the center. 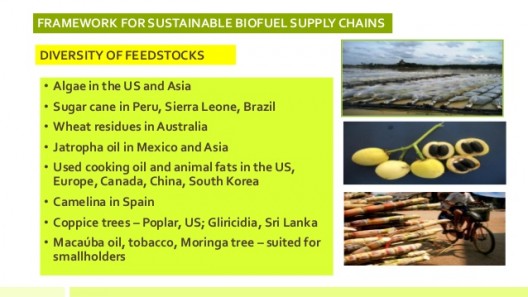 Several of the biofuel programs worldwide

Julie Felgar, managing director of environmental strategy and integration for Boeing Commercial Airplanes shared this statement: “Boeing is working aggressively around the world to expand the supply of sustainable aviation biofuel and reduce aviation’s carbon emissions.  With our joint biofuel research center, Boeing and Embraer are making a strong commitment toward a successful, sustainable aviation biofuel industry in Brazil.”

Embraer brings a strong background in developing aviation biofuels, working with engine manufacturer General Electric in 2011 on a series of test flights with an E-170 with engines burning “hydro-processed esters and fatty acids (HEFA).” The following year, an E-195(a medium-sized commuter jet) from Azul airline flew during the Rio+20 United Nations Conference on Sustainable Development  fueled with biokerosene produced from sugar cane developed by Amyris.

According to the joint press release, “Studies have shown that sustainably produced aviation biofuel emits 50 to 80 percent lower carbon emissions through its life cycle than fossil jet fuel. Globally, more than 1,600 passenger flights using sustainable aviation biofuel have been conducted since it was first approved for use in 2011.”  Boeing claimed 1,500 green fuel airline flights by 2014. 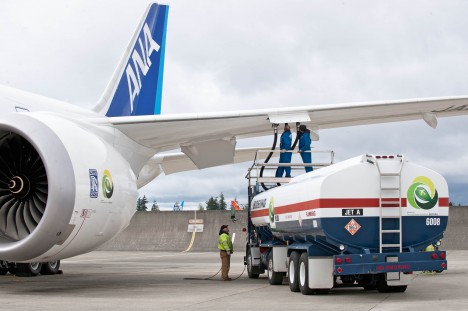 In recent test flights, Boeing flew with a 15-percent blend of NExBTL renewable diesel aviation biofuel.  The “green diesel” is a renewable, drop-in hydrocarbon biofuel commonly available and used in ground transportation.  This type of fuel can use existing infrastructure and requires little or no change to aircraft equipment or procedures – a major part of the desirability of such resources.

According to Green Car Congress, “Boeing previously found that renewable diesel is chemically similar to HEFA (hydro-processed esters and fatty acids) aviation biofuel approved in 2011. With a renewable diesel production capacity of 800 million gallons (3 billion liters) in the US, Europe and Asia, the on-road fuel could rapidly supply as much as 1% of global jet fuel demand. With a wholesale cost of about $3 per gallon, inclusive of US government incentives, green diesel approaches price parity with petroleum jet fuel.”  Better yet, such fuels can be produced by hydrotreating a wide variety of sources, including vegetable oils, waste cooking oils and waste animal fats.  The aspect of redeeming waste and gaining useful work from it makes this particularly desirable.

Julie Felgar comments that, “Green diesel offers a tremendous opportunity to make sustainable aviation biofuel more available and more affordable for our customers. We will provide data from several ecoDemonstrator flights to support efforts to approve this fuel for commercial aviation and help meet our industry’s environmental goals.”

On a lifecycle basis, sustainably produced green diesel reduces carbon emissions by 50 to 90 percent compared to fossil fuel, according to Neste Oil, which supplied green diesel for the ecoDemonstrator 787.

The flight test was coordinated with the US Federal Aviation Administration, Rolls-Royce and Pratt & Whitney; EPIC Aviation blended the fuel.

Boeing’s ecoDemonstrator Program is a multi-year program that conducted its first test flight in 2012 on an American Airlines 737-800. The program continues in 2014 with flights on a 787 Dreamliner and in 2015 on a Boeing 757.

Other airlines and suppliers were sorting out the problems involved in supplying clean fuel to airlines by 2011, and continue their research and development today.

To make sure biofuels do not create more problems than they solve, though, developers must be careful of environmental effects, including the potential of diverting clean water from other purposes to growing plants with which to make biofuels.  Some of the plants are thirsty, and Discovery News reports that by 2030, up to eight percent of all U. S. fresh water may be dedicated to growing biofuel ingredients.

Others are concerned about the displacement of traditional farmers from their lands to make way for growing biofuel plants. 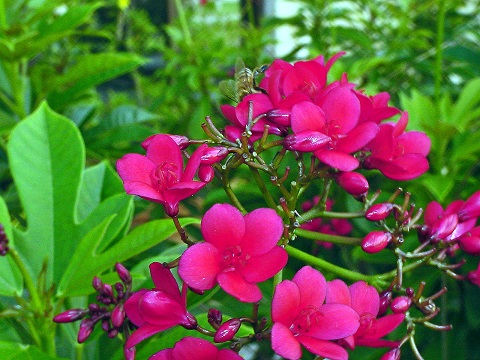 Mariann Bassey, from Environmental Rights Action/Friends of the Earth East Nigeria, claims, “In Africa, farmland is taken away from communities and people’s livelihoods are destroyed for yet another false solution to climate change. Food prices are rising again, yet land is being snatched away to grow fuel for cars. We want agriculture that allows us to grow food for people.”  Similar issues have been reported in Central America.

This blog has reported on concerns surrounding biofuel cultivation and development, and these issues will take honest assessments as to the promise and costs of the new technologies, both from an environmental and human perspective.