Robert Bosch GmbH has developed an “e-kart” producing 20 kilowatts from two motor-generators, and 300 Newton-meters (221 foot-pounds) of torque, a number Bosch refers to as “sporting.” 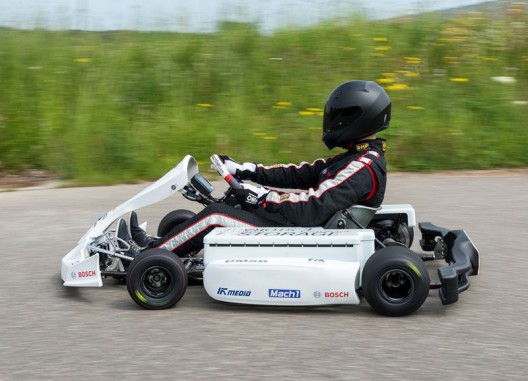 Training wheels for future Formula E drivers, the high torque and go-cart “flingabilty” of such machines makes for realistic training for higher-performance machines

It would be nice to know how much this cart weighs, but Autoweek relates, “The only thing Bosch isn’t saying for now is just how long the e-kart can run on that battery, assuming 10/10ths driving, and how much the battery and powertrain weigh.”

Otherwise, we know the e-Kart goes from 0 to 100 kilometers per hour (62 mph) in under five seconds and can squeal its tires “with just a tap of the pedal.”  A guesstimate of 400 pounds for the total vehicle and driver weight would probably not be too far off the mark, making the acceleration figures seem reasonable. 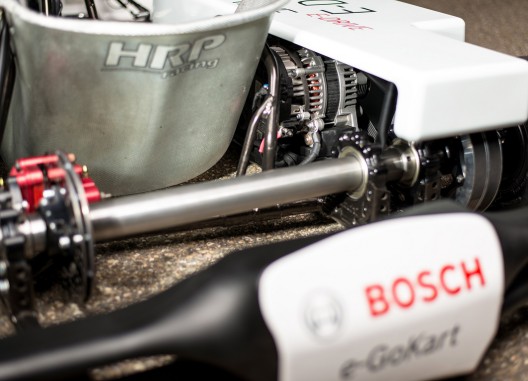 A collaboration of Bosch, FIA Electric, the New Energy Commission, and the German Motorsport Association (DMSB), the e-Kart was presented as part of a Formula E display on May 21, 2016.  Since many Formula 1 drivers come from go-cart racing as their entry point to larger cars, it seems reasonable that future Formula E competitors will come from e-Kart racing.

The motor-generator is similar to (although more sophisticated than) the Bosch starter-generator unit that kicked over the single-cylinder engine on your editor’s 1959 BMW Isetta – his first car.  The combined output of the two 10 kilowatt motors on the e-Kart would have benefited the anemic performance and seemingly negative torque of the 12-horsepower and 300 cubic centimeters the car hid under a starboard cover.

Bosch’s technology seems ideally suited to the needs of e-Kart racing.  “The idea was to create a purely electric motorsport discipline that made no compromises in power or performance. Bosch motorsport engineers came up with a solution in the form of the new BRS boost recuperation system, whose first generation will go into production at the company starting in 2017.” 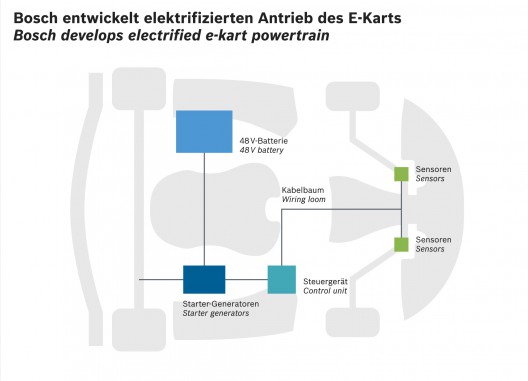 Beyond carts, Bosch intends to market the system as a form of mild hybrid, augmenting the performance of small cars and reducing fuel consumption and CO2 emissions.  The 48-Volt system on the cart and destined for hybrid cars fits the mild hybrid idea and requires higher amperage to turn the wheels, which helps account for the impressive torque figures of these little dynamos.

Such technology may have a place in ultralight electric aircraft, where the ability to turn a large, slow-turning propeller would possible provide performance benefits.  The generator half would be great for allowing regenerative coasting, something being explored by Sun Flyer and Pipistrel.