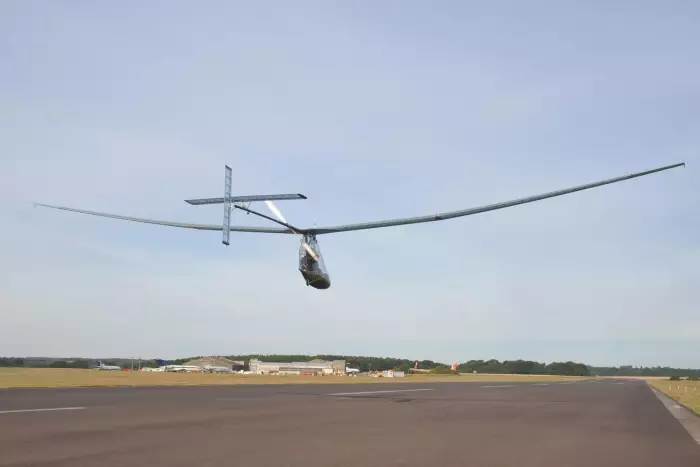 Doing more with much less, British pilots at this year’s Icarus Cup follow in Paul MacCready’s aerial path, staging a highly successful weeklong demonstration of human-powered flight.  Airplanes that fly on about a quarter-kilowatt for as long as the human battery can operate the pedals are not new, and significant records have been achieved over the years. 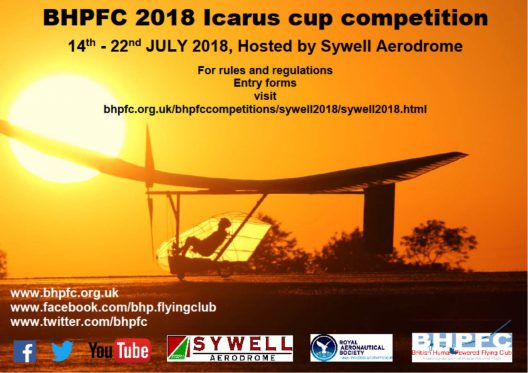 The British have long been involved, beginning with the 590 meters flight by Derek Piggott on November 9, 1961 in SUMPAC (Southampton University’s Man Powered Aircraft – note the sexist terminology of the day).  This was considered the first authenticated takeoff and flight by a human powerplant.  He made 40 flights before suffering a crash that damaged a wing.

To help foster interest in human-powered flight, The Royal Aeronautical Society formed the Man Powered Aircraft Group in 1959.  Henry Kremer, an industrialist, set up the Kremer prize for a figure-of-eight flight around two markers half a mile (~0.8 Km) apart in 1959.  It took 18 years for Brian Allen, pedaling Paul MacCready’s Gossamer Condor to win that prize.  Two years later, he guided the Gossamer Albatross across the English Channel, winning the Cross Channel Kremer Prize.

Others have since flown even longer distances, but the sport has struggled in Europe and America for the last several decades.  The Japanese have created a fairly thriving group of builders and pilots who are approaching the cross-channel distance records.  An international competition might bring money and enterprise into sharper focus.

The rules for this year’s contest  organized by the British Human Powered Flying Club provided for the following tasks:

5) Distance around a triangular course (based on a 1.5 kilometer – 0.93 mile perimeter)

Emulating last year, four teams showed up, but only two actually competed – but fiercely.  Nial Paterson flew the first successful HPA figure of eight in Britain, going around the course one and a half times before making a great landing.  As the video-maker notes, “This isn’t just the first time this flight has been flown in the UK, it’s probably only the second or third time a full figure-of-eight has been flown in any HPA anywhere in the world.”  In other words, it’s harder than Niall Paterson makes it look.

Fred To, a long-time leader in human-powered flight, wrote to your editor, “ A good friend of mine donated some money to us and asked me to design a course for a new prize , so I and John McIntyre came up with a tight figure-of-8 course. Well, the constructors of the aircraft knew that this time they had to have good cyclist/ pilots to fly these aircraft. A great guy Niall Paterson just flew the circuit the first time around and made history, as that was the first time a figure-of-8 had been flown in this country, and it was a much tighter course than ever before with pylons set 350m  apart. In fact, the course could be tightened future to 300m or even 250m in later competitions.”

Winning scores went to the newer Aerocycle 103 and the Airglow, an “experienced” HPA flying since 1989.

Individual pilots racked up points flying the two competitive machines.  One remarkable (to this editor) achievement was 11 reversals in a 500 meter (1,640 feet) slalom event.  This shows a level of control perhaps as tough as that required for the figure of eight.

As reported in the Northampton Chronicle & Echo, “Team Airglow pilot John Boyce has been flying for more than 30 years and is competing this week – he said: ‘You have to drive it with your legs, every ounce is critical, the aircraft is experimental, it’s unpredictable, they’re incredibly affected by changes in wind and weather.’” 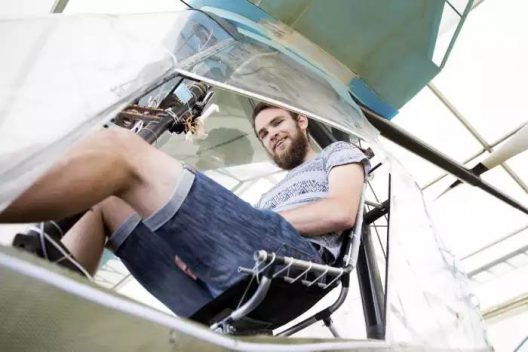 “John added: ‘You can’t get a lesson. If you get a flying lesson you sit next to an instructor for an hour but you get into this for your first flight, on your own, and have about five seconds to learn how to fly it, all the while peddling to the absolute limit of your physical endurance.’”

The Islands Sounder added an interesting note about Alec’s engineering career.  “Proudfoot and his team are based in Palo Alto, California. He was also one of the designers of the first electric car, the EV1, produced by General Motors and the lead engineer on the electric car team at Google before his retirement. He now works as an independent inventor.”

The (Wiltshire) Gazette and Herald added information about Aeroglow’s designer.  “John, of Huntingdon Street, Bradford on Avon, said: ‘This is a fascinating event trying to get a human-powered aircraft to take off and fly in multiple challenges for the trophy. 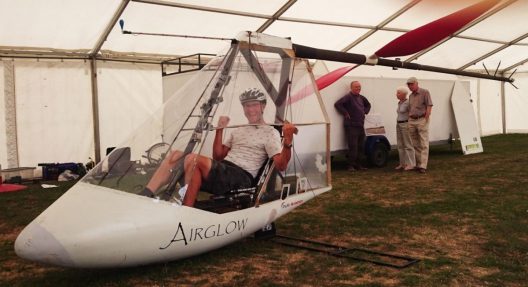 Airglow disassembled in hangar and doing some “hangar flying”

“‘You have about five seconds to get a feel for the controls and the aircraft response, then fly it with minute control, compensating for wind changes, all the while pedaling at your absolute maximum power output.

“‘The aircraft is incredibly unpredictable and vulnerable to any changes in wind speed and direction and you have to make split-second decisions.

“‘You control the aircraft with a tiny electronic joystick, while making judgements and pedaling furiously to the limits of human endurance.

“‘The Airglow team was second overall last year and we were hoping to take the trophy this year but it wasn’t to be.’”

With an American win this year and a creditable performance by a 30-year-old second-place winner, one wonders if the inclusion of Japanese teams would bring greater recognition and the aura of worldwide competition to the event. 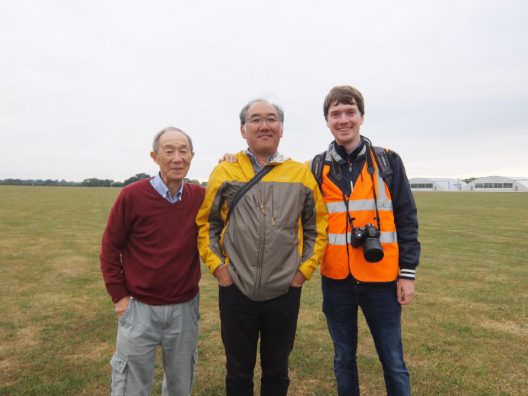 Fred To (left), writes, “The announcer of the Japanese birdman rally, Masato Suzuki, is a friend of mine and he just happens to be the managing director of Yamaha bikes in the UK, he came up and visited us and was amazed at the progress made with designs. Masato had been involved with HPAs since his days at Nihon University and is a great guy.”  Friend on right is identifed as “Jesse.”

Thanks to Fred To for his contributions to HPAs, and to Chris Roper for his ongoing chronicling of these fantastic machines.  Fred has ties to a Japanese HPA follower who might be able to help make next year’s event truly international.