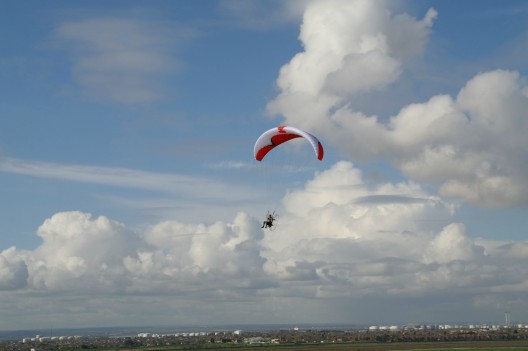 As noted on his web site, “Most of the parts used are pretty easy to come by, taken from giant scale RC and the frame is aluminum.   No welding was used – just nylon lock nuts and bolts.  The whole unit weighs in at just over 19 kilos (41.8 pounds) with batteries and harness and puts out 27 kilos (59.4 pounds) of static thrust.”

Motors are EMP model XYH80-100-As, each capable of producing a peak 6,500 Watts (8.7 horsepower) from a 1.75 kilogram (3.85 pounds) unit.  These have a 12 millimeter (1/2-inch) shaft, a bit more substantial than some model motors and aiding their purpose in turning direct drive propellers.   EMPs seem to be available in England only, but cost a mere 85 pounds each (about $136) – real economy champs.  Canderton notes the motor is similar to Turnigy model aircraft units which are available in the U. S.  A Turnigy Rotomax 100cc motor is about $375, and is roughly equivalent in output to the EMPs.

A word of caution here.  Many of these model aircraft motors, especially those made overseas, are not the equivalent of American-made motors such as those from Steve Neu and AstroFlight Products, Bob Bouchard’s operation in California, or German products such as those from Plettenberg and Hacker.  These seem to have better reported reliability at a higher price (some not that much greater).  Users must determine how much they value their physical well-being before committing to any power system. 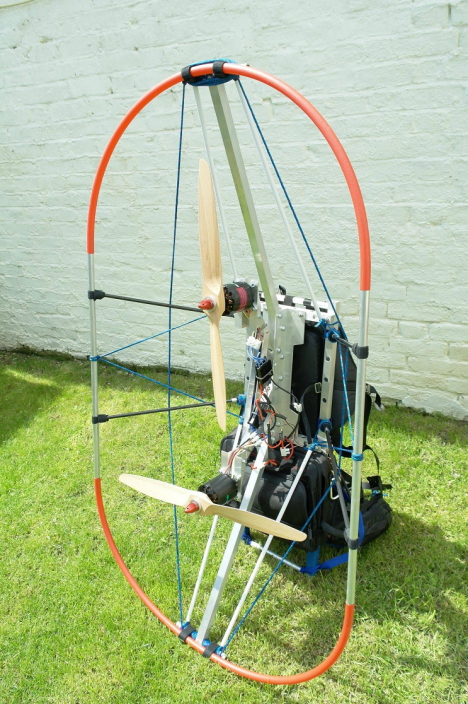 Canderton uses four 5,500 milliAmp-hour battery packs arranged with four cells in parallel and six in series (4P/6S) to gain the necessary voltage and amperage.  He then connects two of these packs in series to feed 44.4 volts to each motor.  While charging or using these packs on this backpack frame, Canderton takes the precaution of enclosing them in a “Lipo-sack,” a thermal insulation sleeve that protects users from thermal runaways in the cells.  These should give around a half-hour run time with motors at full power.

Current is fed through two Hobbywing Platinum 120A HV OPO ESCs (electronic speed controllers).  These can handle 120 Amps continuously, and are optically isolated, using fiber optic, rather than electric signals, to modulate the controller’s output.

Controllers are “throttled” though a servo tester, used by model airplane flyers to check operation of devices that make ailerons and tail feathers wiggle in proper fashion.

As can be seen, such a rig can be devised for reasonable amounts of money, and if one already has a canopy, can be a fairly immediate source of aerial gratification.  This type of rig could be adapted to nano-trikes and with modification, find its way onto the trailing edges of ultralight sailplane wings.

Experimenters like Tony Canderton show the many ways in which we can find ourselves in the skies affordably.  He invites reader input, a profitable enterprise for him and our readers.  (Addition, June 24: Tony says this is meant to be a “People’s EPPG. and the best way to assure that is through the Internet.”)