Despite weather conditions that made hoped-for speeds impossible, the Ohio State University Venturi Buckeye Bullet team set a so-far unofficial one-mile record of 240.320 mile per hour (386.757 kilometers per hour) in their Venturi VBB-3 streamliner.  The aptly named Bullet suffered damage from the rough track because of recent rains on the 12-mile stretch.  Normally, the Bonneville Salt Flats are smooth enough to allow re-use of the vehicle. 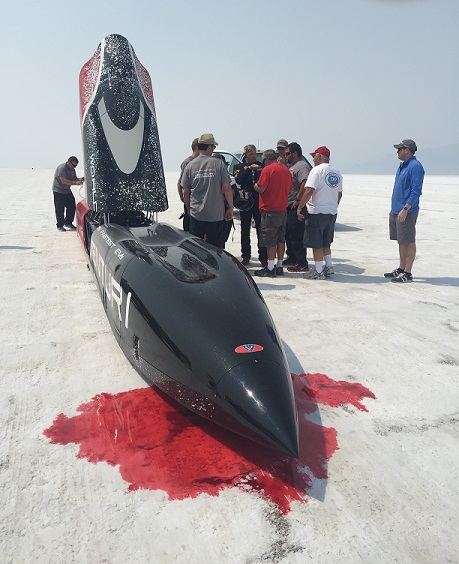 Bleeding an unidentified fluid on the salt flat, Buckeye VBB-3 did manage a mile record regardless

The Columbus Dispatch reported on the home team.  “’We went faster than we have ever gone with this vehicle, but it was a very difficult week on a very bumpy track and we have done some damage to the vehicle from extreme vibrations,’ said David Cooke, a mechanical engineering graduate student at Ohio State and a leader of the team, in a statement provided by the school.”

The Dispatch adds, “The record, which still needs to be certified by an international governing body, is for a specific vehicle type: Category A Group VIII Class 8.”

The 240 mph run is great considering the conditions (weather was bad enough to keep the team from building even a temporary shelter for over a week), but the team has done better – in 2010 hitting 307 mph in their VBB-2.5 streamliner.  The Ohio State team’s cars have come from Venturi, a Monaco-based maker of unique vehicles. 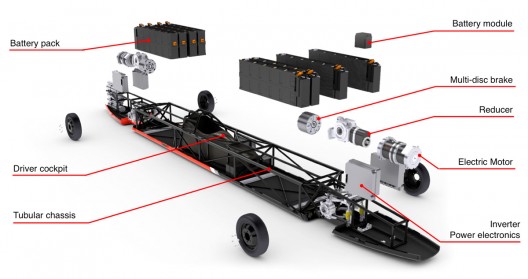 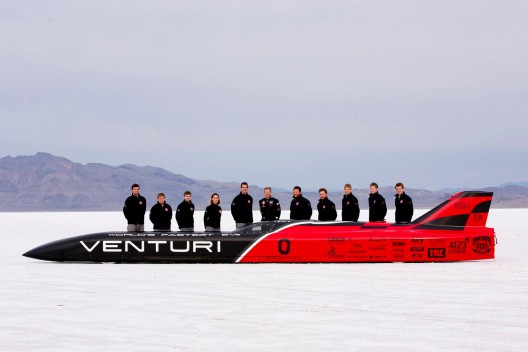 Venturi VBB-3 with Buckeye team during a break in the weather.  Team hopes for much higher speeds on future runs

Because VBB-3 has 3,000 horsepower and 2,800 Newton-meters (2,065 foot-pounds) of torque at its command, the constraints on speed this year had to be disappointing to the team.  While the original cars had front-wheel drive, the latest version has four-wheel drive to handle the four times greater power from the 2,000 lithium iron phosphate pouch cells.

Ohio State must have a strong engineering department, since they also fielded the Buckeye Current team with their electric motorcycle that did well in the Isle of Man TT, and continued three years of outstanding performance at the Pikes Peak International Hill Climb.  The Current team had its own problems, its champion cyclist, Rob Barber, having crashed during practice.

Both the bike and Barber needed rebuilding.  Joe Prussiano took over the ride and did the team proud with a “second [place finish] in its class and 16th overall out of 52 motorcycles with a time of 11:12.756. This feat is 46 seconds faster than the leading electric motorcycle of the 2014 Hill Climb.”  The fact that a group of students held their own against well-capitalized and supported professionals speaks volumes for their abilities and their advisers.  The fact that electric bikes are competing at nearly equal levels with fossil-fueled machines shows the impressive gains made in the last few years.

Racing does improve the breed, and CAFE has an understanding that much of what goes into our electric airplanes will come out of cars, and increasingly, motorcycles.  Economies of scale will bring prices down and competition will help hone the quality of products to a fine degree.  Congratulations to Ohio State for their continuing leadership in development and competition.