Researchers announce that a “New battery technology from the University of Michigan should be able to prevent the kind of fires that grounded Boeing 787 Dreamliners in 2013.”  The use of the word “should” is instructive, since scientist usually couch such announcements in more guarded terms.

Battery separator materials are usually not the glamorous part of cell development, most headlines given to electrode and electrolyte breakthroughs.  Kevlar may be a way, within batteries, of preventing a breakthrough.  Nanofibers extracted from Kevlar, that impenetrable material in bullet-proof vests, “stifles the growth of metal tendrils that can become unwanted pathways for electrical current,” according to a University of Michigan report.

Separator material stands between layers of other battery materials and ideally allows the passage of ions between electrodes in the battery.  As the researchers report, “The innovation is an advanced barrier between the electrodes in a lithium-ion battery.”  The nanofiber material has openings large enough to allow transfer of ions between anode and cathode, but openings small enough to block dendrites which grow like stalagtites or stalagmites in caves.  Once these dendrites from one electrode touch the other electrode, that part of the battery is essentially shorted out.  Enough dendrites poking through eliminate any useful work that might otherwise be produced. 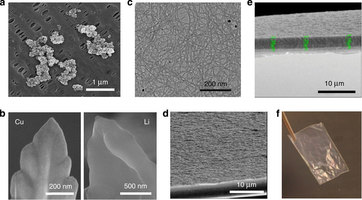 Nicholas Kotov, the Joseph B. and Florence V. Cejka Professor of Engineering and head of the project, explains, “Unlike other ultra-strong materials such as carbon nanotubes, Kevlar is an insulator.  This property is perfect for separators that need to prevent shorting between two electrodes.”  The University’s announcement suggests that such shorting was a possible cause of battery fires on Boeing’s 787.

Dendrites found in the team’s research formed “fern-like” patterns, which presented particular difficulties.  As explained by Siu On Tung, a graduate student in Kotov’s lab, “The fern shape is particularly difficult to stop because of its nanoscale tip.  It was very important that the fibers formed smaller pores than the tip size.” 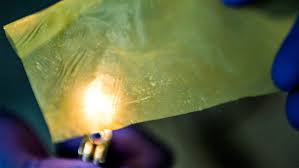 Pores in other battery membranes are a few hundred nanometers, or a few hundred-thousandths of a centimeter: the pores in the membrane developed at U-M are 15-to-20 nanometers across,  “large enough to let individual lithium ions pass, but small enough to block the 20-to-50-nanometer tips of the fern-structures.”

Researchers layered the nanofibers on top of each other in thin sheets, keeping “the chain-like molecules in the plastic stretched out, which is important for good lithium-ion conductivity between the electrodes,” Tung said. 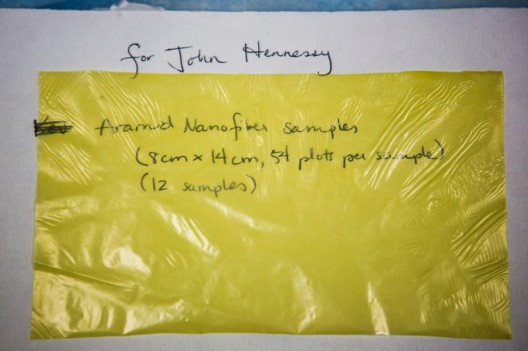 Tung is also a co-founder of Ann Arbor-based Elegus Technologies, which anticipates mass production of the separator material by the end of fiscal 2016.

The U of M reports, “’The special feature of this material is we can make it very thin, so we can get more energy into the same battery cell size, or we can shrink the cell size,’ said Dan VanderLey, an engineer who helped found Elegus through U-M’s Master of Entrepreneurship program. ‘We’ve seen a lot of interest from people looking to make thinner products.’”  Already, thirty companies have asked for samples of the material, indicating an interest in thinner, lighter, safer batteries.

The University also notes that, “Kevlar’s heat resistance could also lead to safer batteries as the membrane stands a better chance of surviving a fire than most membranes currently in use.

“While the team is satisfied with the membrane’s ability to block the lithium dendrites, they are currently looking for ways to improve the flow of loose lithium ions so that batteries can charge and release their energy more quickly.”

The paper’s abstract describes the new composite’s ability to suppress dendrite growth.  “Dendrite growth threatens the safety of batteries by piercing the ion-transporting separators between the cathode and anode. Finding a dendrite-suppressing material that combines high modulus and high ionic conductance has long been considered a major technological and materials science challenge. Here we demonstrate that these properties can be attained in a composite made from Kevlar-derived aramid nanofibres assembled in a layer-by-layer manner with poly(ethylene oxide). Importantly, the porosity of the membranes is smaller than the growth area of the dendrites so that aramid nanofibres eliminate ‘weak links’ where the dendrites pierce the membranes. The aramid nanofibre network suppresses poly(ethylene oxide) crystallization detrimental for ion transport, giving a composite that exhibits high modulus, ionic conductivity, flexibility, ion flux rates and thermal stability. Successful suppression of hard copper dendrites by the composite ion conductor at extreme discharge conditions is demonstrated, thereby providing a new approach for the materials engineering of solid ion conductors.”