Quadrotors are being tested and used for an amazing range of tasks, including taking medicine and other humanitarian deliverables to remote  villages and finding hostages while providing tactical intelligence to ground forces. 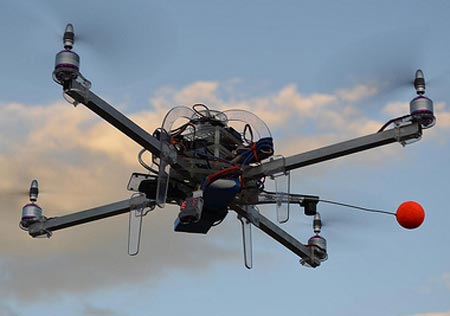 The hope of tacos being delivered to San Francisco Bay area residents, as advertised on a web site listing itself as a “private beta” link was busted as a hoax by Christina Bonnington of Wired.   She wrote that TacoCopter was the brainchild of, “Star Simpson, an MIT grad who stumbled into the limelight in 2007 after being arrested for wearing a hoax explosive device comprised of a circuit board and green LEDs.”  This was after 14,000 “likes” on Wired’s Facebook page and 4,000 tweets excited about the possibility of tacos from the sky.  But who knows?  The Huffington Post said it was the real deal and concluded its article by urging, “Let’s do this, America: Together, we can team up and make a future with Tacocopters a reality today.”  This seems to have an aspect of clapping our hands to make Tinkerbelle fly, but is worth the wishing for.

Perhaps as a response to the uproar over aerial tacos, a free-spirited trio from Yelp put together a fixed-wing alternative, the Burrito Bomber, a flying wing, electrically-powered delivery vehicle, unlikely to miss its promised ETA unless there’s a back-up in the kitchen.  Their Devo-like video and costuming betray a Yelp corporate culture that’s a bit more fun than the last few bouts of involuntary servitude your editor endured.

A great deal of the bomber is off-the-hobby-shop-shelf equipment.  A Skywalker X-8 FPV/UAV Flying Wing powered by a small outrunner motor provides the heft: a Quantum RTR Bomb System provides the means of precision air drops.  The team added a three-inch diameter mailing tube to hold the gastronomical deliverable. The full bill of materials gives sources, a great deal from DIY Drones, for this economical and potentially profitable delivery system.  All is amazingly inexpensive, including autopilots below $60.

Logistics teams at the taqueria can set navigation waypoints and load those into an ArduPilot control system, which allows the Bomber to find its way, theoretically, through wind, rain, snow or dark of night. Control freaks can manually control the aircraft by following its progress through a video feed from a built-in camera.

Darwin Aerospace describes a typical mission.  “Orders are taken through a web app, which pinpoints a user’s location and automatically creates a waypoint file for the drone to follow. Then an operator loads the burrito into the canister, uploads the waypoint file, and sends the bomber on its way. The canister holds and protects a 500 gram burrito and deploys an attached parachute when dropped, so the contents arrive in one edible piece at their destination.”

Co-designer Yoni De Beule answered a few questions for the blog and made a personal request of our audience.

“Most of our parts are off the shelf parts usually combined in creative ways. The ArduPilot system is an open source program. We have some ideas on how a higher fidelity delivery system could work. This would incorporate more custom work, a different airframe style and longer range electronics.

“However, as there is no real information available on what the FAA will allow in 2015 we don’t want to go too far down that route.”  The team would like to contact anyone reading this blog with “information on what the FAA will allow in terms of autonomy and flying in densely populated areas…. I bet the target audience of CAFE Foundation would be our best bet by far to get some better information on the subject.”  The target audience of this blog being diverse and intelligent, answers should be forthcoming. 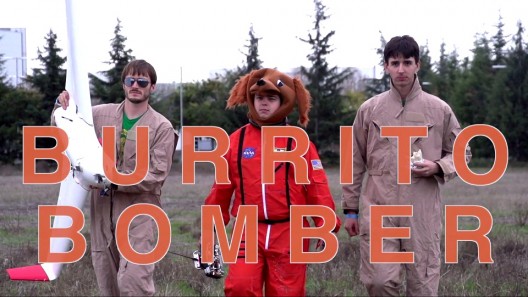 From left to right: John Boiles, Yoni De Beule and Evan Krall. With the help of Patrick Dunnam (filming) and Yelp Engineering.

Not to quibble, but parachute delivery might be a problem on gusty days.  Guiding a parachute to a predetermined target will be a good trick, but maybe a solvable one.  There’s still the problem of multiple-story buildings and other obstacles that might make airdrops less than reliable.

Chip Yates, working on endurance flights with his Long-ESA, anticipates dropping spent batteries on a closed-circuit course and having them guided to a recharging station.  Perhaps folding wings on the deliverable would make guidance easier, but it will be interesting to see how this comes to be.  Chip anticipates delivery services for larger products from autonomous drones cruising over routes between major cities, electronic competition for UPS and FedEx.

Finally, Yelp seems to have a corporate culture that nurtures such visionary thinking, exemplified by a ”Kegmate” used to dispense and evaluate beer served at company “Hackathons.”  Kegmate builds a database on tipplers from their coded access cards, including favorite selections and frequency of said selections.  It must make for interesting attempts to correlate suds consumption and productivity, and might lead to an extra column on performance reviews.