1. An informal meeting for the exchange of views.

2. An academic seminar on a broad field of study, usually led by a different lecturer at each meeting.

CAFE Foundation President Dr. Brien Seeley spoke by invitation at the Sigma Series Colloquium at NASA Langley in Hampton, Virginia on May 4th. His talk had an illustrious heritage as part of the longest-running science colloquia in America, beginning 50 years ago with a presentation by Werner von Braun, and since then including talks by Carl Sagan, Alex Haley, Neil Armstrong and other notables. 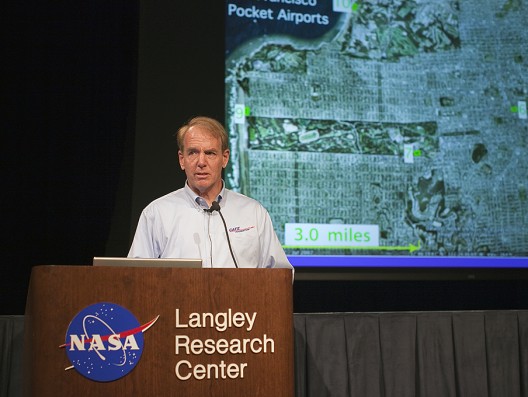 Dr. Seeley was interviewed by NASA public relations TV and a local news station. Although not used to being treated like a celebrity, he found that, “People seem to think CAFE is latched on to an exciting future.”

His talk focused on themes he has been developing for years – time wasted in traffic, the burden of maintaining the freeway/highway/urban sprawl infrastructure, the oil consumed in pointless waiting in traffic or in crawling through a drive-in window lineup (22 percent of meals are ordered through a car window).

Dr. Seeley’s presentation discussed these problems and offered a novel solution – specialized, probably electric, light aircraft. This is not a frivolous conjecture on his part. It follows a multi-discipline approach that he and NASA have developed over the years, including automated flight controls that would allow an electronic Certified Flight Instructor to always be in the cockpit with any pilot.  Dr. Seeley has done extensive study in the area of neurological connectivity and mechanical-electronic enhancement of human capabilities. Couple automated controls and navigation with “niche” aircraft that fill the gap between commercial airliners and ground transportation for short to medium range flight, and you have the basis for substantially reducing terrestrial congestion.

According to the NASA report on the Colloquium, “Seeley is extolling the value of quiet, electric-powered personal air vehicles in pocket airports in communities as a way to beat the freeway madness.  Take as few as 4 percent of the cars off the road, he said, using a Michigan statistic,” and gridlock can be undone.

The NASA report goes on; “Put those 4 percent of drivers in a personal air vehicle. Electric motors beat the noise. Extreme Short Take Off and Landing techniques beat the space issue. Technology makes the vehicles easier to fly. They even have their own paths to beat aerial traffic.

“’The sky theoretically can be divided into an almost limitless number of freeway lanes, overpasses, underpasses, off-ramps,’ Seeley said. ‘A computer system will be able to allocate in real time what might be considered a ‘wormhole’ through the sky. It’s a 4-d pathway, the fourth-dimension being time.

“’The ‘wormhole’ that takes you from Hampton to Richmond might be a different shape for each of the people who make that commute. Or it could be a repeatable time frame in which people are directed with a certain time spacing, one ahead of the other.

The scenario works for trips up to about 250 miles. The door-to-door speed at that distance, including that part spent on a 540 mph airplane, is about the equivalent of a 55-mph drive – if you could drive 55 mph in gridlock.”

Speaking to NASA engineers and scientists in the afternoon, Dr. Seeley repeated his lecture for the public at the Virginia Air and Space Center in the evening. 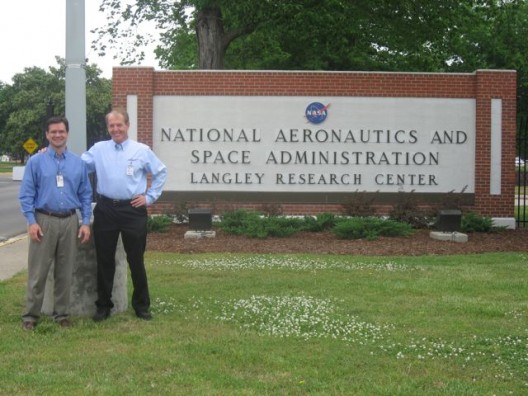 Following his presentation, Dr. Seeley told CAFE Board members, he, “Spent two hours in the morning in Ken Goodrich’s cool simulation lab looking at and flying his haptic simulator and brainstorming synthetic vision, NextGen, and airspace safety.” At a dinner that evening, Dr. Seeley found a supportive group of current and former NASA chiefs, all hopeful that CAFE will obtain NASA headquarters support for Green Flight Challenge II.

An eye surgeon, Dr. Seeley learned to fly while in medical school, is self taught in aerodynamics, helped build two experimental aircraft, and founded the CAFE Foundation in 1981. Professionally, according to NASA, “He was elected vice president of his 155-physician specialty group and president of the University of California at San Francisco Cordes Eye Society. The Sonoma County (Calif.) Medical Association awarded him ‘Outstanding Contribution to Sonoma County Medicine in 2003’ for his 10 years of publishing diverse medical science articles in the journal, Sonoma Medicine.”

Another NASA press release explains some of NASA’s relationship with CAFE. “In summer 2005, NASA and CAFE signed a Space Act Agreement for CAFE to host the NASA Centennial Challenge (CC) for Aviation, a 5 year program. CAFE conducted the first two CC flight competitions in Santa Rosa in both 2007 and 2008. In July 2011, the CAFE team will host the first ever NASA Green Flight Challenge for 200-MPG aircraft.”

This continuing dialogue with NASA is crucial to CAFE’s mission to improve our overall quality of life through developing means to reduce congestion, pollution, greenhouse gases, and time wasted with today’s overwhelmed highway system.  This is not just about little airplanes, but using those craft to capture the public imagination and promote new technology and new visions for a better future.