Massachusetts Institute of Technology (MIT) scientists have announced what they claim is a “Significant advance in battery architecture [that] could be breakthrough for electric vehicles and grid storage.”

According to a story by David L. Chandler from the MIT News Office, the new battery system is lightweight and inexpensive, and could make recharging “as quick and easy as pumping gas into a conventional car.”

Seemingly requiring some active components within the battery, this “semi-solid flow cell” pumps solid particles suspended in a carrier liquid which form the cathodes and anodes through the system.  According to the MIT news item, “These two different suspensions are pumped through systems separated by a filter, such as a thin porous membrane.”  Mechanically more complex than today’s batteries, the system still has a claimed “10-fold improvement over present liquid-flow batteries” (not necessarily that much better than lithium ion, then), but lower manufacturing costs. 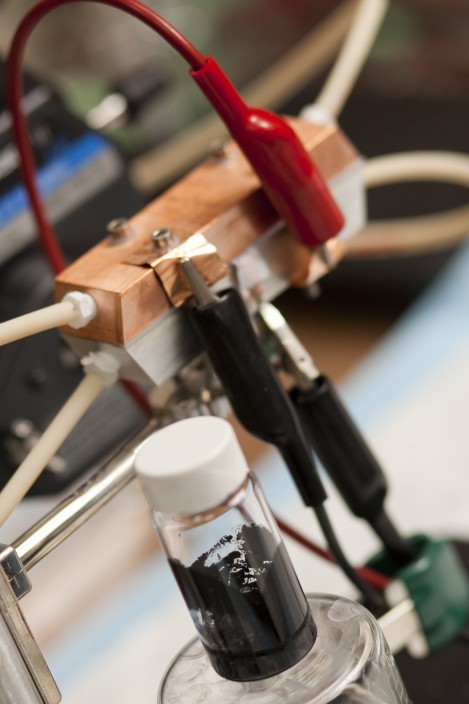 The different fluids are contained in two different containers and not brought together until energy is needed.  A user would always have a “fresh” battery with this system, unlike conventional cells that lose energy over time because all the ingredients are contained in a single structure and interact to varying degrees.  The team also claims that the system will be smaller and less expensive than extant batteries, perhaps, “about half the current levels.”  They think this could “be the key to making electric vehicles fully competitive with conventional gas- or diesel-powered vehicles”

The high energy density fluids are dark and “gooey,” leading to their nickname, “Cambridge crude.” Researcher Yet-Ming Chiang told Discovery.com that, “”It’s a flowing electrode that’s electrically conductive all of the time. That’s the secret sauce.” 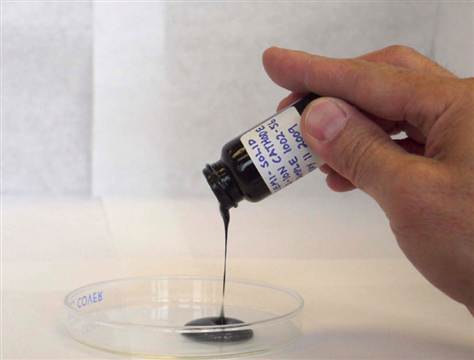 Chandler’s story goes on, “The work was carried out by Mihai Duduta ’10 and graduate student Bryan Ho, under the leadership of professors of materials science W. Craig Carter and Yet-Ming Chiang. It is described in a paper published May 20 in the journal Advanced Energy Materials. The paper was co-authored by visiting research scientist Pimpa Limthongkul ’02, postdoc Vanessa Wood ’10 and graduate student Victor Brunini ’08.”

Combining the separate storage of quicksand-like fluids with “the proven chemistry of lithium-ion batteries” led to the potential for new developments.  Researchers claim the system could be increased in size for energy storage for wind and solar projects. 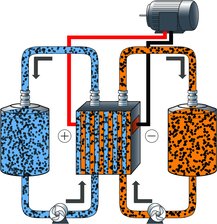 Schematic of MIT battery, with anode and cathode materials separated until being combined in central "reactor"

Chiang was involved in the 2001 startup of A123 Systems, whose batteries power a vast number of portable electric tools.  In contrast, the fluid-flow battery system will not be a good candidate for such small, high-power uses, but will be better used as a source for long-range, long-term vehicle or utility applications.

Professors Angela Belcher and Paula Hammond at MIT and Glenn Amatucci at Rutgers are adding their research acumen to the project, with the goal of producing a prototype “ready to be engineered for production as a replacement for existing car batteries.”

Best of all, according to Discovery.com, “The electro-chemical fuel can be reused so drivers could feasibly swap out a spent tank of for one that’s been charged.  Since the batteries decouple energy and power, fueling stations could offer different types of electro-chemical fuel.

“’If you would like high-power fuel, we could give you high-power fuel. If you would like longer-range fuel: ‘premium range,’ Chiang said. This would give drivers the ability to get electro-chemical fuel tailored to their operating conditions — as well as the season. Electrolyte chemists usually design for the broadest range of temperatures, giving up performance at the high and low ends.

“’The sweet spot we’re aiming for is a battery with enough power for any vehicle application but with the longest run-time possible,’ Chiang said.