Cambridge University researchers have developed a new “artificial leaf” that uses sunlight, carbon dioxide and water to directly generate “syngas,” without releasing additional CO2 into the atmosphere.  As the Cambridge team reported, ‘Syngas is currently made from a mixture of hydrogen and carbon monoxide, and is used to produce a range of commodities, such as fuels, pharmaceuticals, plastics and fertilizers.”

Other “leaves” have been devised, perhaps the most famous being that of Daniel Nocera, formerly at MIT and now at Harvard University.  He was among the first and at the time, most successful, or the leaf producers.  Note the next step he proposes at the end of the short video.

Professor Erwin Reisner from Cambridge’s Department of Chemistry has been working for seven years on achieving Nocera’s desire to directly produce fuel from the elements.  “You may not have heard of syngas itself but every day, you consume products that were created using it. Being able to produce it sustainably would be a critical step in closing the global carbon cycle and establishing a sustainable chemical and fuel industry.”

Pursuing the vision of producing photosynthesis, Reisner and colleague split the process with two light absorbers and a single cobalt catalyst to separately produce oxygen on one side and a mix of carbon monoxide and hydrogen – the ingredients for syngas – on the other.

The cobalt catalyst reacts with the materials to produce the oxygen and the syngas ingredients, and apparently works well during periods of low light on rainy or overcast days.  PhD student Virgil Andrei, first author of the paper, explained the importance of this. “This means you are not limited to using this technology just in warm countries, or only operating the process during the summer months. You could use it from dawn until dusk, anywhere in the world.”

Cobalt would be one ingredient of concern, being toxic and moderately difficult to separate from the nickel with which it is often found.  The researchers noted with double exclamation points cobalt’s contradictory application here.  Although it is less expensive than other catalysts such as platinum, it is somewhat difficult to dispose of or to reuse.

“Syngas, a mixture of CO and H2, is a crucial intermediate in the industrial production of methanol, higher alcohols, long-chain hydrocarbons, lubricants, waxes and fuels via the Fischer–Tropsch process. … The conventional reforming of methane to syngas relies on fossil fuels to operate at high temperatures and pressures and biomass gasification can introduce contaminants. The solar-driven production of syngas from aqueous CO2 is an ambient conditions and clean alternative process. Although silicon, dye, metal oxide and perovskite photoabsorbers provide enough driving force in tandem devices for bias-free water splitting, very few examples of bias-free photoelectrochemical (PEC) CO2 reduction are known. 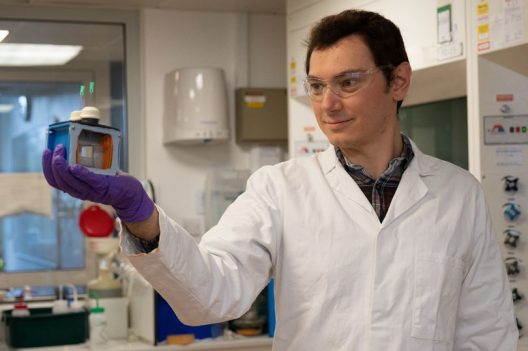 Owing to the large overpotentials that need to be overcome for a simultaneous CO2 reduction and water oxidation, most of those systems employ up to six photovoltaic (PV) solar cells connected in series or complex nanostructures based on noble metals. Accordingly, a vast library of molecular catalysts that employ earth-abundant metals for CO2 reduction remains underexplored. Such catalysts are known to achieve improved selectivities towards CO production at lower overpotentials—Co porphyrin and phthalocyanin recently demonstrated a selective aqueous CO2 reduction to CO when immobilized onto carbon nanotube (CNT)-based electrodes.

Here we tap into that library of molecular catalysts by using the commercially available cobalt(II) meso-tetrakis(4-methoxyphenyl)porphyrin (CoMTPP), which can be readily immobilized via π−π stacking interactions onto CNT sheets, also known as buckypaper. The composite is employed in electrodes, state-of-the-art perovskite-based photocathodes and perovskite–BiVO4 PEC tandem devices, which couple tunable syngas to O2 production in an aqueous solution.

The Christian Doppler Laboratory for Sustainable SynGas Chemistry in the University’s Department of Chemistry performed the research, which was co-funded by the Austrian government and the Austrian petrochemical company OMV, “which is looking for ways to make its business more sustainable.”

The team hopes to find ways to make the syngas into usable fuels in one step.  Since, according to Reisner, electricity can supply only 25-percent of the total global energy demand, “There is a major demand for liquid fuels to power heavy transport, shipping and aviation sustainably.”

The “gradual” transition from fossil fuel to renewable synfuels

Somewhat discouragingly, the ability of batteries to meet that demand is still unrealized, so we will need to make liquid fuels cleaner and more obtainable in the meantime.  This artificial leaf may be a bridge to the future.