Creators of a one-step process called STEP (Solar Thermal Electrochemical Photo) claim a world of benefits, including pulling carbon dioxide from the air and turning it into useful things, such as fuels, cement, and cheap carbon fiber.  The process can also purify and desalinate water, according to many of the 300 peer-reviewed papers by Dr. Stuart Licht of George Washington University and his graduate students.

The elevator speech regarding their research can be found on the home page for the group.   “A new fundamental solar process has been introduced.  STEP efficiently removes carbon from the atmosphere and generates the staples needed by society, ranging from fuels, to metals, bleach and construction materials, at high solar efficiency and without carbon dioxide generation. By using the full spectrum of sunlight, STEP captures more solar energy than the most efficient solar cell or photoelectrochemical processes.”

According to the British Broadcasting Company (BBC), the sample of nanofibers Dr. Licht showed participants at the Autumn Meeting of the American Chemical Society represents one hour’s output at the laboratory scale now producing the material using STEP.   If STEP can be scaled up to industrial levels, the promise that earth’s atmosphere can be returned to pre-industrial age CO2 levels might be plausible. The researchers look forward to “direct removal & utilization or storage of carbon dioxide from the atmosphere or smokestacks.”  But first, that scaling will need to take place. 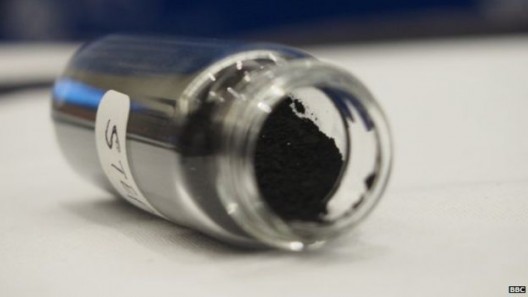 According to the abstract for the team’s paper, “One-pot synthesis of carbon nanofibers from CO2,” in the August 15 issue of Nano Letters, “The first experimental evidence of a new solar process, combining electronic and chemical pathways, to isolate CO2 (carbon capture) is presented. This solar thermal electrochemical photo (STEP) process is a synergy of solid-state and solar thermal processes, and is fundamentally capable of converting more solar energy than photovoltaic or solar thermal processes alone. Here, CO2 is captured using a 750−950 °C electrolysis cell powered by a full spectrum solar simulator in a single step. The process uses the full spectrum; solar thermal energy decreases the energy required for carbon capture, while visible sunlight generates electronic charge to drive the electrolysis. CO2 can be captured from 34% to over 50% solar energy efficiency (depending on the level of solar heat inclusion), as solid carbon and stored, or used as carbon monoxide to be available for a feedstock to synthesize (with STEP generated hydrogen) solar diesel fuel, synthetic jet fuel, or chemical production.”

Dr. Licht’s “one pot” method of pulling carbon nanofibers from the air can demonstrably produce small amounts of these fibers with low energy inputs, but hoped-for larger carbon capture might be “problematic,” according to Dr. Katy Armstrong, a chemical engineer at the University of Sheffield and quoted in the BBC article.

“’As they are capturing CO2 from the air, the process will need to deal with huge volumes of gas to collect the required amount of carbon, which could increase process costs when scaled up,’ she told the BBC.”

Dr. Licht stands by his premises.  “’There aren’t any catches; there’s a necessity to work together, to test this on a larger scale, to apply some societal resources to do that,’ he told BBC News.”

Bringing down costs for manufacturing nanofibers could have disruptive effects on structural materials (imagine carbon fiber as inexpensive as aluminum), or battery development.

Others working on pulling in CO2 and bringing out products include Joule, reported in this blog for solar-powered brews of ethanol and diesel fuel using engineered bacteria; and Audi, working not only with Joule, but with several other European firms to produce fuels for its automobiles.

It’s most exciting to see progress in even the remote possibility that the “insolent chariots,” as once described by critic John Keats, could become a socially responsible means of cleaning up our profligate act and possibly use fuels or run on batteries from their one-time waste.