Three companies – Air Fuel Synthesis, Cool Planet Energy Systems, and Joule Unlimited – are generating comment and controversy for their approaches to creating different kinds of biofuels. They all promise extreme reductions in carbon emissions and lower prices at the pump. Their output could use existing infrastructure for delivery, making them all desire able commodities if their promise can be achieved.

Cool Planet
Cool Planet Energy Systems claims to be, “The only company producing carbon negative fuels using plant photosynthesis to remove CO2 from our atmosphere.” Its now patented approach recycles its solid products back into the soil, and using more of the liquid fuel products cleans the air more quickly, according to the firm’s web site.

The company’s process divides its output from plant-based sources into liquid fuel and bio-char, an activated carbon that can be used as a coal substitute or fertilizer and soil conditioner, in which instance it acts as a carbon sequestration material, reducing the carbon footprint of the process by 150 percent. Used as a coal substitute, it is carbon neutral, according to Cool Planet, based on GREET (Greenhouse gases, Regulated Emissions and Energy use in Transportation) model calculations from the U. S. Department of Energy’s Argonne National Laboratory.

The process still requires the use of agricultural land, perhaps a problem, but uses plants such as giant misanthus, a sometimes ornamental grass that grows quickly and is viable in dry environments. In dried form, it can be mixed with coal and burned in existing power plants.

Google backs Cool Planet, and has used its fuel in an OnDemand campus test vehicle, part of their GRide program. Comparing a “control” vehicle which used 100-percent regular gasoline with a similar “test” vehicle using a blend of gas with five-percent Cool Planet negative carbon fuel, both cars were found to operate normally. After 2,490 miles in the test car and 2,514 in the control vehicles, both were identical in emissions tests.

Testing with higher percentages of biofuel will be of even more interest and add credibility to Cool Planet’s claims. Howard Janzen, President and CEO of Cool Planet, looks forward to that higher output along with lower prices.

“Unlike many other biofuel companies, Cool Planet’s carbon negative gasoline is price competitive because of the ingenuity behind our innovation. By mass producing mobile, pre-fabricated micro-refineries that are easily transportable to the biomass source, we significantly reduce costs of feedstock transportation, which maximizes our overall capital efficiency. Each micro-refinery is one hundred times smaller than a typical oil refinery and can produce 10 million gallons of fuel per year; this puts us in the running to compete with oil at $50 a barrel without any government mandates or subsidies.”

Air Fuel Synthesis
Air Fuel Synthesis promises to make synthetic carbon-neutral fuels to specification, although in a recent BBC interview, the company’s Chief Executive Peter Harrison seems to beg a few questions, especially regarding the amount of energy needed to make the final product. So far a million pounds has produced five liters of fuel, although prices might eventually be as low as 25 pence (40 cents) per liter, or about $1.52 per U. S. gallon. That would be incentive enough to drive further development.

Professor Tony Marmont is the founder of the company, and being as he tells it, “ashamed” of the CO2 his helicopter puts into the atmosphere while the systems on his 50-acre Leicestershire farm are exceedingly “green,” has started AFS to ease his conscience and provide long-term atmospheric carbon relief. Having managed wind farms in Texas and promoted hydrogen research at universities, he has a long-term acquaintance with clean energy. Having flown long enough to see the dark film in the air over our cities, he senses the urgency of his endeavor.

The process is shown in sketch form, but is also better defined on the firm’s web site. 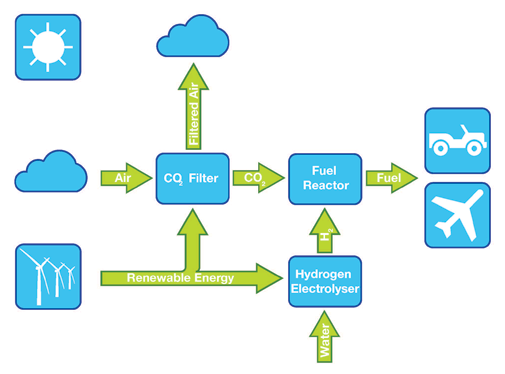 An ideal location for the commercialization of this technology would probably include an adjacent solar or wind farm to supply the energy, with a carbon-producing industry to provide the necessary CO2 for conversion to liquid fuel.

First customers will come from the motorsports industry, where “demand for carbon-reduction and quality is particularly strong,” and where high prices are not a deterrent when winning is everything. AFS has also enjoyed publicity from the BBC and national papers, which headline “Petrol From Air” promises, however misleading.

Joule®
Joule’s technology looks like a cross between Jonathan Trent’s OMEGA project and Air Fuel Synthesis’ approach.  The company promises rapid expansion in a few years, rather than decades.

The firm says, “More than a promising technology, Jouleis advancing a platform for renewable fuel and chemical production that is expected to eclipse the scale, productivity and cost efficiency of any known alternative to fossil fuel today.”

Joule’s process has gone from concept through laboratory model and is now in a demonstration phase at Hobbs, New Mexico. The firm’s outlook and projected pricing for its products is similar to other biofuels manufacturers’ claims. 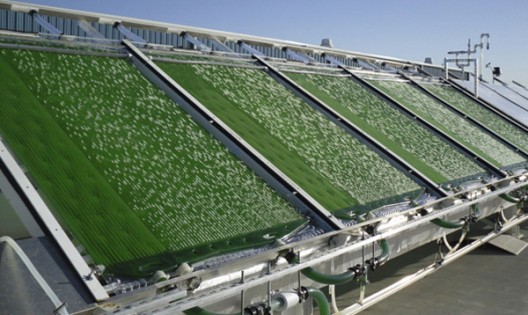 Carbon in the air and sunlight produce Joule oil source

Its September 11 press release explains, “SunSprings plant operations will begin with production of Joule Sunflow™-E to compete in the ethanol market, valued at approximately $64 billion. Because Sunflow-E is derived from sunlight and industrial waste CO2, Joule can uniquely meet market demand with no depletion of natural resources or impact on global food supply and pricing. Joule has already achieved productivity rates of 15,000 and 8,000 gallons/acre/year in the lab and outdoor production, respectively, well above the maximum productivities that biomass-dependent processes can achieve. Following demonstration, Joule will be equipped to deploy its modular platform across multiple sites around the world, targeting initial productivities of 10,000 gallons/acre/year. This includes an opportunity to build a commercial facility in Hobbs, where the company has access to 1,200 additional acres and the inputs that drive its process. As the technology continues to advance, Joule ultimately targets productivity of up to 25,000 gallons of Sunflow-E per acre annually, at costs as low as $1.28/gallon without subsidies.”

Ethanol will be joined by  Sunflow-D Diesel fuel as quickly as possible.

All three enterprises have significant backing, with Joule recently partnering with Audi for its motorsports arm. Audi had great success at LeMans this year with a one-two finish for its Diesel hybrid racers.

All three firms are based on an idealistic set of goals which include reducing global warming and reducing carbon in the atmosphere. Whether their idealism will be tempered by setbacks or illuminate with success will be of intense interest while we wait for solar, wind, and battery power to reach their own pinnacles.