Carplane is an innovative enterprise in Braunschweig, Germany, intent on producing a hybrid vehicle that, while it resembles the Rutan Model 367 BiPod, differs in significant ways.

The company’s “pitch” is similar to those from other roadable car developers since the Waterman Aerobile or Taylor AeroCar.  “Imagine the daily commute without transfers, exits, congestion, or missed connections,” the German Center for Research and Innovation envisions.  “As an aircraft that can also drive on roads, the Carplane® will head for its destination in a beeline without detours or stop-and-go traffic. Located in Lower Saxony, Germany, and under the general management of Angela Fleck, herself a pilot, the Carplane GmbH is in the process of building such a dual-mode vehicle. Designed as a Light Sport Aircraft (LSA), requiring only 20 hours of instruction to fly, commercial applications will include recreation, business travel, and emergency service.” 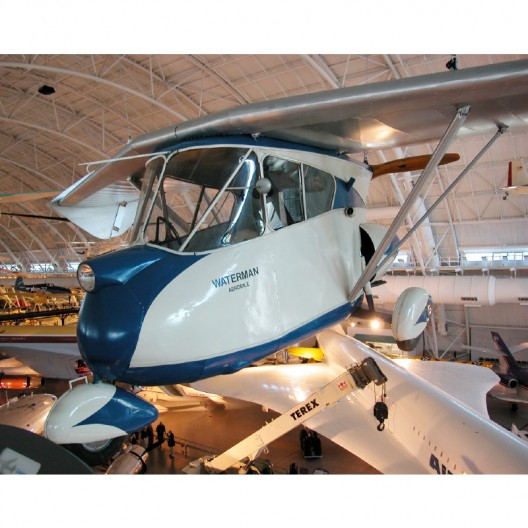 Like the BiPod, Carplane has a twin cockpit catamaran-like fuselage arrangement, a “hybrid” power system, and the ability to be transformed from road to aerial mode.  Like the BiPod, hard details as to construction or propulsion are spotty (although its appearance at AirVenture 2011 may add to BiPod’s knowledge base).

Unlike the BiPod, which apparently requires operators to attach or detach wings as part of its transformation, Carplane has a highly automated and very slick mechanism that takes only 15 seconds to swap modes.  Since the makers use electric drive for highway driving and internal-combustion power for sky commutes, that switchover is made easier by the fact that the “air-mode” engine is in a cowling above the center of the wing, not hidden inside the fuselage as on the BiPod.

“The air-mode combustion motor,” according to Carplane, “uses premium fuel and operates at low RPM with relatively low consumption, noise and emissions.”

Optimizing “lift in air-mode and generat[ing] downforce in road-mode,” Carplane enables “autobahn speeds (109 miles per hour or 176 kilometers per hour).”  As an airplane, it’s limited to LSA performance, cruising at 136 miles per hour (118 knots), considerably slower than BiPod’s claim of 200 mph.

While BiPod is a budget project created by a small crew with private funds, Carplane is being developed with government support and sponsorship from Niedersachen Aviation, an aerospace consortium in northern Germany.  It’s been presented, in model form, at this year’s Hannover Fair and Friedrichshafen’s Aero Expo, with obvious interest from government leaders.

Because system details are not available, questions remain about the batteries and power systems used in Carplane.  The 136 mph air speed is plausible, but the power and duration necessary to cruise the autobahn on electric power while staying within LSA weight limits would seem a real breakthrough.  We eagerly await more information.

Thank you to John Brown of Carplane for alerting your editor to this exciting development.