The German firm Carplane made an entry into the media a few years ago, especially when it compared its bi-modal flying car with a Burt Rutan design.  That started a brief kerfuffle of edgy comparisons between the two groups, but no necessary winner.  Now, having shown at least a finished and apparently drivable vehicle at Aero 2015, Carplane has renewed prominence in the media.  And the blog brings it all back, prepared for less-than-flattering comments. 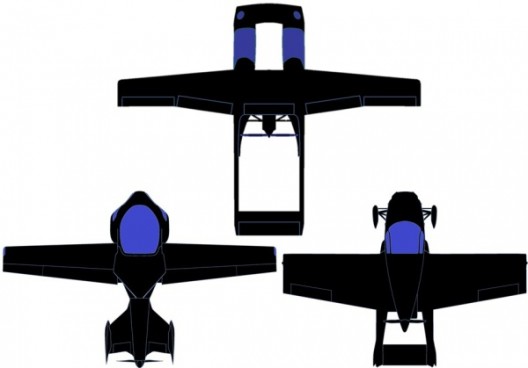 In its current iteration, Carplane compares itself to Terrafugia (lower right) from America and the Aeromobile from Slovakia

Stating what may stir others to contend for their rival mounts, Carplane makes a bold claim.  (The italicized and bolded word is Carplane’s emphasis.) “Flying cars will soon be a reality. And Carplane® is the world’s only flying car currently undergoing formal certification. Watch this page as we complete the process.”

Some of the “automated” features on the design as originally conceived included a wing that pivoted out from its storage between the twin fuselages and attached itself to the central assembly.  The builders have apparently retained that feature, although it must add considerable weight.  AOPA reports, “While it might seem that the wings need to be detached manually, actually the conversion is automated. The wings fold scissors-like, departing the wing attach points and stacking behind the cockpits, then move forward into their storage space. This prevents what the Carplane Web site indicates is a crosswind problem when wings are folded but extend upward from the vehicle while driving. A direct competitor, Terrafugia, uses that storage method.” 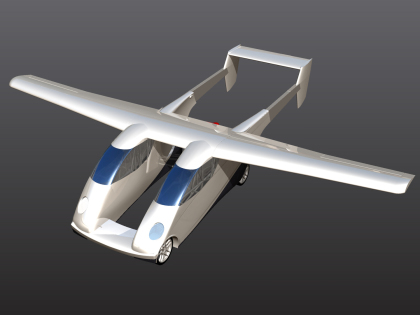 Carplane in flying configuration. Mechanism to insert wings and extend tail would be wondrous to see in action

“Among the over 2,000 known flying car designs, 300 have actually flown. So the challenge isn’t ‘making a car fly’, it’s ‘making it safe enough to get certification’”.  (Again, the bold emphasis is Carplane’s.) 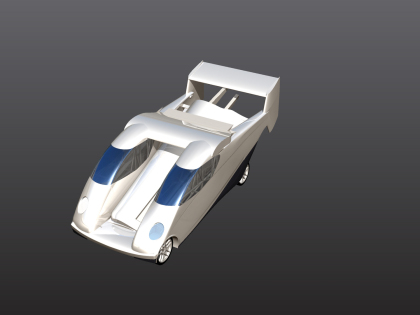 Carplane ready for the Autobahn, with wings tucked neatly in ostensibly drag-reducing configuration

The engine, originally mounted in a pod above the fuselages, is now hidden between them, which allows for quieter operation, according to references quoted by Carplane.  The gear system to drive both the rear wheel on each fuselage and turn the propeller when in takeoff and flight mode must be another instance of clever design.  Using the rear wheels to help accelerate the takeoff run is an idea being promoted for upcoming Green Flight Challenges.  Carplane claims a takeoff distance of only 85 meters (297 feet) using this extra push.

As a car, the machine would run on the Autobahn at speeds up to 174 kilometers per hour (108 mph).  With the required airbags and other safety gear, weight will have to be monitored very carefully.

If Carplane can keep the weight within European LSA standards and obtain the performance they now predict, they will have lived up to their rhetoric.  The at-least four-way competition has different configurations, design philosophies, and myriad details.  We look forward to what comes next.