Cella Energy, a UK-based energy company, announced big plans for hydrogen storage in early 2011, and is now beginning to deliver on its earlier promise.

Hydrogen, as desirable as it is for use in transportation, presents many hurdles in its use.  Creating an infrastructure for its distribution has been a major impediment so far, but Cella hopes to overcome that with its nanotechnology pellets that can be distributed, transported and used much like fossil-fuel liquids.

Cella highlights the fact that the hydrogen is stored in low-pressure form at ambient temperatures and can be handled safely in the open air (something that can’t be said about gasoline, for instance).  It benefits customers by being able to use existing distribution networks and outlets.  Imagine a gas station or airport refueling truck that dispenses hydrogen in pellet form as well as the normal liquid fuels.

The company’s “elevator pitch” promotes the “three minute, 300 mile rule.”  We’re used to pulling into a gas station, filling our vehicle in three minutes, and then driving 300 miles before having to repeat that routine.

As Cella  points out, “The electric and hydrogen vehicles currently used do not overcome these challenges. Electric vehicles can take hours to recharge, and then provide ranges of only 100 miles. The hydrogen vehicles use highly pressurized tanks of hydrogen gas, gas that not only requires a great deal of energy to compress, but is hazardous to use. Worse still, this type of hydrogen use would require massive investment in a pressurized hydrogen refilling infrastructure.”

Led by Professor Stephen Bennington, now Chief Scientific Officer for Cella Energy, a team is working at the Science & Technology Facilities Council’s Rutherford Appleton Laboratory near Oxford, UK to develop a way to make hydrogen practical.  “The team used a technique called coaxial electrospinning to safely encapsulate complex hydrides using nanostructuring techniques. The result was a fuel with more energy than gasoline or lithium-ion batteries that could be handled quite safely in the open air and pumped like a fluid. This meant we could meet the most important DoE criteria.”

By encapsulating and nano-structuring chemical hydrides in plastic, Cella produces pellets filled with hydrogen that can be handled in air.  Because of their size, the pellets release the hydrogen quickly and cleanly when heated; heating one gram of Cella’s pellets will produce one litre of hydrogen (at normal pressures and temperatures). 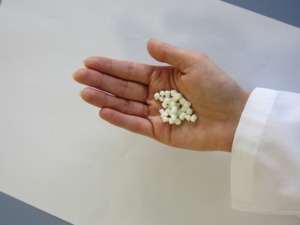 Heat these pellets to release hydrogen

Following a second investment round, Cella now has laboratories at both Rutherford Appleton and at the NASA Kennedy Space Centre KSC in Florida.  From its years of sending Shuttles into space, KSC has become one of the largest users of hydrogen worldwide.  In space applications, hydrogen makes a good radiation shield, protecting personnel and electronics.

Cella’s advantages can be applied to miniature fuel cells used in portable electronic devices, battle-field power packs, and even in aircraft.  The idea of modifying existing engines to burn hydrogen and making modest changes to existing systems to “pump” the hydrogen makes this technology highly attractive. 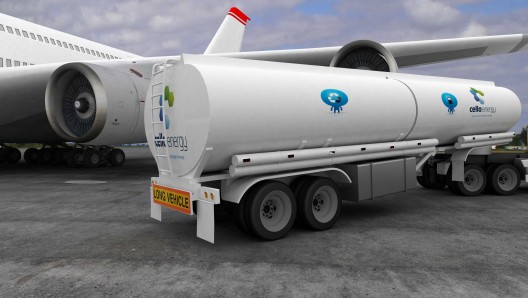 Cella has won a string of awards including the prestigious Shell Springboard Award and the Energy Storage Challenge sponsored by ONR, the Office of Naval Research (US Navy).

Hydrogen can buffer intermittent wind and solar shortages, and store energy for long periods.   In Cella’s view, their simple containers can provide an alternative means to transport stored energy from sites such as off-shore wind platforms.

As with all attempts to use hydrogen, the big issue is one of producing the gas economically and in an environmentally clean way.  There’s little use in creating a clean-burning gas by using fossil fuels in its production, for instance.  The Blog will look at a few possibilities in coming weeks.