Hydrogen fuel cells would be just about the most wonderful power producers in the world if they weren’t so expensive and so finicky about their diet of hydrogen.  Their catalysts, usually made of costly platinum, can be destroyed by impurities in the gas.  Making high-purity hydrogen is an exacting task and adds to the expense of operation.

Two studies by scientists at the U.S. Department of Energy’s (DOE) Brookhaven National Laboratory; one in conjunction with researchers at South Korea’s Ulsan National Institute of Science and Technology (UNIST), Korea Institute of Energy Research (KIER), show that it may be commercially possible to make less expensive catalysts with available materials, and in one case, use “dirty” hydrogen that would otherwise destroy fuel cells.  The reduced price of making such hydrogen would further add to operational economies.

Green Car Congress reports that Brookhaven and UNIST have discovered, “a new family of non-precious metal catalysts based on ordered mesoporous porphyrinic carbons (M-OMPC) with high surface areas and tunable pore structures. Porphyrins are any of a class of heterocyclic compounds containing four pyrrole rings arranged in a square.”  These orderly, porous materials are said to give better performance than platinum while costing 1/10th as much. 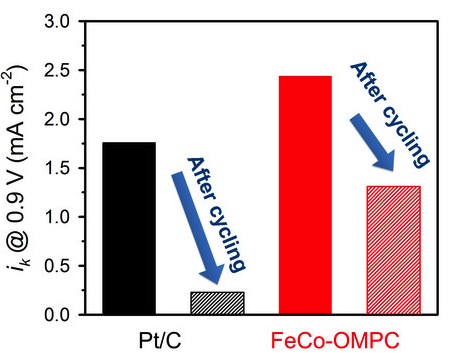 Comparison of kinetic currents of Pt/C and FeCo-OMPC catalysts before and after 10,000 potential cycles.

The materials, discussed in an open paper in Scientific Reports, reportedly react more strongly to produce an oxygen-reduction reaction (ORR) than platinum, a potential cost-reduction factor in making fuel cells.

Researchers claim in the abstract to their study, “…Here we report on a simple approach to scalable and highly reproducible synthesis of a new family of non-precious metal catalysts—self-supported, transition metal-doped ordered mesoporous porphyrinic carbons (M-OMPCs)—which exhibit Pt-like catalytic activity for the ORR. The M-OMPC catalysts were prepared by nanocasting ordered mesoporous silica (OMS) templates with metalloporphyrin precursors, and were constructed with three-dimensional networks of porphyrinic carbon frameworks. Our synthetic strategy for the non-precious metal catalysts included a multitude of advantages that would be favorable to PEFC applications.”

The catalysts showed very high surface areas, adding to their ability to react with the hydrogen, and also showed a higher potential service life that platinum, with higher ability to produce electrical current before and after 10,000 cycles.

The research was led by Sang Hoon Joo, professor of the School of Nano-Bioscience and Chemical Engineering at South Korea’s UNIST. Fellow authors include: Jae Yeong Cheon from UNIST; Gu-Gon Park from the Korea Institute of Energy Research (KIER); and Radoslav R. Adzic from the Chemistry Department of the Brookhaven National Laboratory.

This research was supported by the Basic Science Research Program through the National Research Foundation of Korea funded by the Ministry of Education, the support from Korea Institute of Energy Research, National Junior Research Fellowship, and Global Ph.D. Fellowship.

A second study from Brookhaven shows a new catalyst that can produce energy from carbon-monoxide-polluted hydrogen, the kind that comes from the extraction of natural gas.  Without expensive purification, it can’t be used in conventional fuel cells. That’s a great loss, since it’s 40-percent less expensive than the pure hydrogen split from water.

The catalyst, described in the September 18, 2013 Nature Communications, has a core-shell made from Ruthenium coated with platinum.  The material resists damage from CO and its nanoparticle structure keeps the primary materials in perfect order.

While a platinum catalyst can “peel” the energy from pure hydrogen, any CO can deactivate the metal.  Ruthenium is more tolerant of the impurity, but comes apart during fuel cell startups and shutdowns, losing performance over time.

Wang explains, “We set out to protect ruthenium cores from dissolution with complete platinum shells just one or two atoms thick.  Previous surface science studies revealed remarkable variation of surface properties in this core-shell configuration, suggesting the need and the opportunity to perfect the recipe with precise control.”

Researchers were able to use ethanol to fabricate the nanoparticle core and shell, keeping the process simple and relatively low temperature.

“Simply adjusting temperature, water, and acidity of the solutions gave us complete control over the process and yielded remarkably consistent ruthenium nanoparticle size and uniform platinum coating,” said Brookhaven Lab chemist Radoslav Adzic, another coauthor on the study. “This simplicity offers high reproducibility and scalability, and it demonstrates the clear commercial potential of our method.” 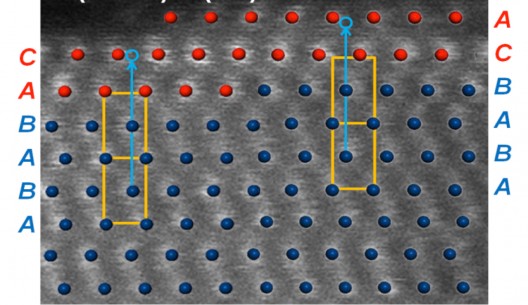 Brookhaven scientists had great cooperation from their Lab’s National Synchrotron Light Source (NSLS), which allowed them to map the core and shell structures and make sure reality matched theoretical models.  Using density functional theory (DFT) calculations, scientists could use computers to help “identify the most energetically stable platinum-ruthenium structure”.  “The DFT analysis connects the dots between performance and configuration, and it corroborates our direct observations from x-ray diffraction and electron microscopy,” Adzic said.

Since the new catalyst performs well in pulling hydrogen from water, “Proton Onsite, a company specializing in splitting hydrogen from water and other similar processes, has completed feasibility tests for deploying the technology in their production of water electrolyzers, which will now require about 98 percent less platinum.”

“’Water electrolyzers are already on the market, so this nanocatalyst can deploy quickly,’ Wang said. ‘When hydrogen fuel cell vehicles roll out in the coming years, this new structure may accelerate development by driving down costs for both metal catalysts and fuel.’”