Researchers in Glasgow and at Stanford University have devised ways to decouple oxygen and hydrogen from water without resort to expensive extraction or storage techniques.  Both breakthroughs involve low-cost materials, low-energy requirements, and the production of clean hydrogen through what should be renewable energy resources.

The latter overcomes one major objection to hydrogen production.  As Professor Lee Cronin of the University of Glasgow’s School of Chemistry explains, “Around 95% of the world’s hydrogen supply is currently obtained from fossil fuels, a finite resource which we know harms the environment and speeds climate change. Some of this hydrogen is used to make ammonia fertilizer and as such, fossil hydrogen helps feed more than half of the world’s population. 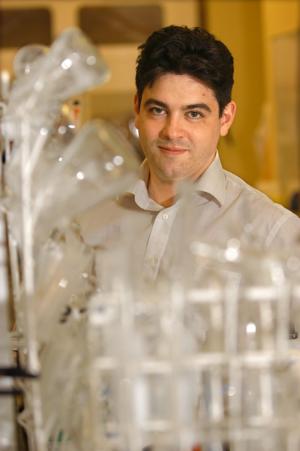 “The potential for reliable hydrogen production from renewable sources is huge. The sun, for example, provides more energy in a single hour of sunlight than the entire world’s population uses in a year. If we can tap and store even a fraction of that in the coming years and decrease our reliance on fossil fuels it will be a tremendously important step to slowing climate change.”

Their new method, according to Professor Cronin and his team, produces hydrogen 30 times faster than current state-of-the-art methods which involve electrolysis, and often rely on fossil fuels to power the operation.  Current approaches often use proton exchange membrane electrolyzers (PEMEs) with precious metal catalysts to generate the hydrogen.  These catalysts are held in high-pressure containers and the process requires large electric currents – something not always available from renewable sources.

It overcomes the issue of needing to immediately use the hydrogen or store it, usually an involved process.  Professor Cronin explained the method and the advantages of the new approach. “The process uses a liquid that allows the hydrogen to be locked up in a liquid-based inorganic fuel. By using a liquid sponge known as a redox mediator that can soak up electrons and acid we’ve been able to create a system where hydrogen can be produced in a separate chamber without any additional energy input after the electrolysis of water takes place.

“The link between the rate of water oxidation and hydrogen production has been overcome, allowing hydrogen to be released from the water 30 times faster than the leading PEME process on a per-milligram-of-catalyst basis.”

The research was produced as part of the University of Glasgow Solar Fuels Group, which is working to create artificial photosynthetic systems which produce significant amounts of fuel from solar power.  This effort is similar to work done by Dr. Daniel Nocera at MIT and Harvard in the United State.

Stanford University researchers, headed by Hongjie Dai, obviously looking for similar low-voltage results, have crafted a water splitter that runs on an ordinary AAA battery hooked up to low-cost nickel and iron electrodes used to bubble oxygen and hydrogen from the water at room temperature.

Dai explained, “It’s been a constant pursuit for decades to make low-cost electrocatalysts with high activity and long durability.  When we found out that a nickel-based catalyst is as effective as platinum, it came as a complete surprise.” 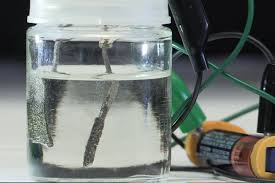 Stanford graduate student Ming Gong, co-lead author of the study, found the nickel equivalency to platinum – at least as far as water splitting goes. Stanford reports, “Ming discovered a nickel-metal/nickel-oxide structure that turns out to be more active than pure nickel metal or pure nickel oxide alone,” Dai said. “This novel structure favors hydrogen electrocatalysis, but we still don’t fully understand the science behind it.”

Not only is the nickel/nickel-oxide catalyst significantly lower in cost, it “significantly lowers the voltage required to split water, which could eventually save hydrogen producers billions of dollars in electricity costs.”  Gong’s next goal is to improve the durability of the device to prevent regular swapping out of defunct electrodes.  Researchers also plan on developing a solar powered system, to do away with constantly having to replace those little batteries.

Not content with just providing hydrogen for California’s planned fleet of fuel-cell cars, the team notes that the same device can produce chlorine gas and sodium hydroxide, an important industrial chemical.  Their device and its operation are described in their paper in the August 22 issue of the journal Nature Communications.

“Hydrogen is an ideal fuel for powering vehicles, buildings and storing renewable energy on the grid,” said Dai. “We’re very glad that we were able to make a catalyst that’s very active and low cost. This shows that through nanoscale engineering of materials we can really make a difference in how we make fuels and consume energy.”  The team, unlike that in Glasgow, fails to mention how the hydrogen produced will be stored, at least in their paper’s abstract.