Your editor was on hand Saturday, October 5 at the California State Airshow at Mather Field, 20 miles east of Sacramento, mainly to see if Chip Yates could break his own electric aircraft speed record in his Long-ESA (Electric Speed and Altitude).

He did break his previous Guinness Book of World Records speed of 202.6 miles per hour (and more recent speeds) on Saturday, but topped that on Sunday, with a quiet run of 216.9 mph.  One Facebook fan wrote, “Incredible Plane… it’s a miracle.” 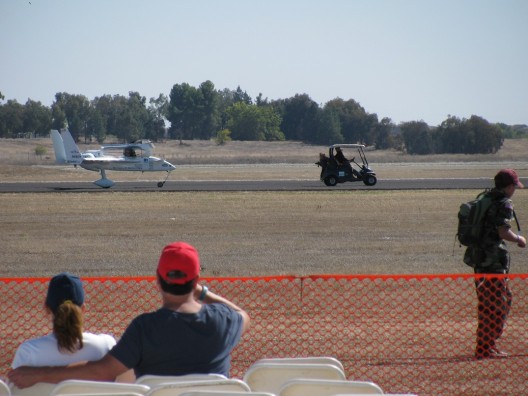 The California Capital Airshow featured the usual crowd-pleasing noisy acts, with Chip being silently towed to runway’s end during fly-bys and aerobatics.  His takeoff drew a hush from the crowd, straining to hear the soft whirring of the airplane’s Catto propeller.  After a few runs in both directions over Mather’s main runway, he landed, taxied in, and took the airplane back to its display tent at the entrance to an aviation-related kid’s playhouse.

He drew a steady stream of young autograph seekers, charmed by his enthusiastic personality and his technology-loaded airplane.  His EnerDel battery pack is newer, larger, and takes up the rear seat and inboard wing strakes. 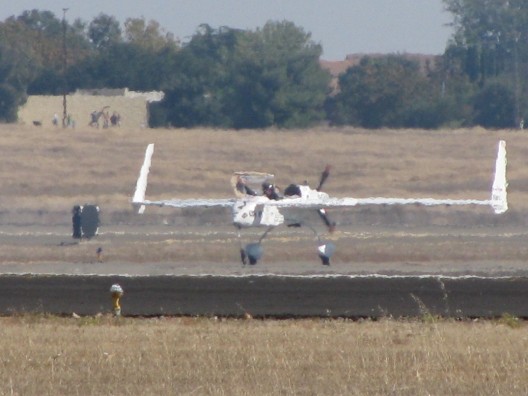 Having set a world speed record, Chip taxis back to his display tent.  It wasn’t as hot as this picture makes it look

“In the quiet, early-morning hours of last Friday, Chip Yates set three international records for altitude in an electric aircraft at Inyokern Airport. Although only a few were on hand to witness Yates’ latest aerospace feat, one of them was a Federation Aeronautique International official who was able to confirm and document the records.

“Yates said that the FAI will issue a press release next week confirming the specific results, but noted that he and his team have definite plans to improve upon those records in the near future.

“The three confirmed records are for time to climb to 3,000 meters, where his time of 6 minutes 28 seconds beats even gas-powered planes. He said his homebuilt electric plane would be ‘good enough to beat the climb performance of the vast majority of airplanes in the world.’

“His other records were established for highest altitude and for sustained flight duration at more than 14,000 feet. 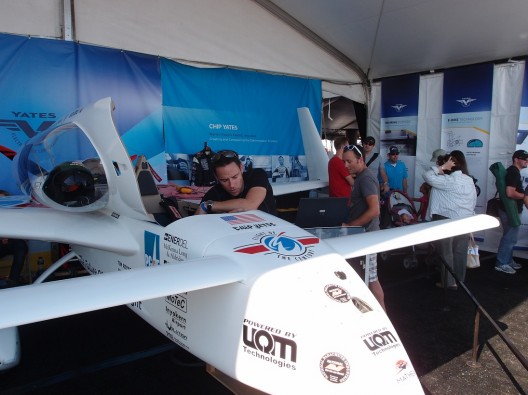 “’It’s exciting to have these three official world records, but I think it’s even more exciting to know that we can continue to improve on those numbers and soon set the top speed records we want to do next,’ said Yates. ‘We haven’t come close to maxing out our capabilities.’” 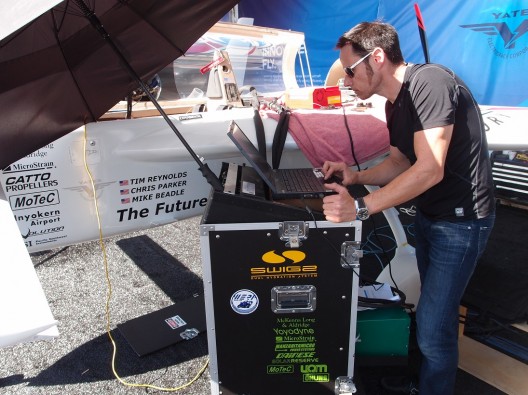 Electric aviation seems to be as much about uploading, downloading and programming as just flying

Yates will continue working on his plans for mid-air recharging, essential to his planned “Flight of the Century,” an electrified version of Lindbergh’s historic Atlantic crossing 86 years ago.

We will be following this record seeker as he “ups the ante” with each new pass down the runway.  Congratulations, Chip!

The Flight of the Century web site released an update October 9.

October 5-6, 2013:  In a breathtaking ascent to 1640 ft in one minute four seconds, pilot Chip Yates and his now-famous Long-ESA set a new Guinness World Record for speed of climb to altitude in an electric airplane this past weekend at the California Capital Airshow, one of the largest in the nation.

Thousands of spectators at the former Mather Air Force Base outside Sacramento craned their necks on Saturday to watch history being made and hear Yates’ voice from the cockpit as the all-electric plane climbed from a dead stop to the target 500M in 62.58 seconds, a full 17 seconds ahead of the existing fastest time of 1:20. “We’re at 1000 ft…1200 ft…1400 ft…1640 ft…we’ve done it in just over a minute…a new world record!”

And on Sunday, the Long-ESA was back in action to set a second world record, this time for speed over a 1km course averaging two passes, one from each direction. Yates piloted the electric aircraft to 220.9 mph on the first pass and 212.9 mph on the second, resulting in a new world record of 216.9 mph. This brings the total electric vehicle world records achieved by Yates and his team to an unprecedented 16.

We’re extremely excited by all these world records and their implications for potential commercial and military applications of electric vehicle technology,” said Yates. “But to me one of the best parts of this weekend is that before the show we pledged $1,000 for each world record we hoped to set at the airshow, as a donation to the U.C. Davis Children’s Hospital to buy toys for their ICU. So I’ll have the pleasure of presenting that $2,000 gift.”