With recognition this week of five electric airplane records set by Chip Yates in flights last year, the Fédération Aéronautique Internationale (FAI) and the National Aeronautic Association (NAA) ratified performance numbers that top those of most single-engine high-performance gasoline-powered aircraft from established manufacturers, according to Yates. 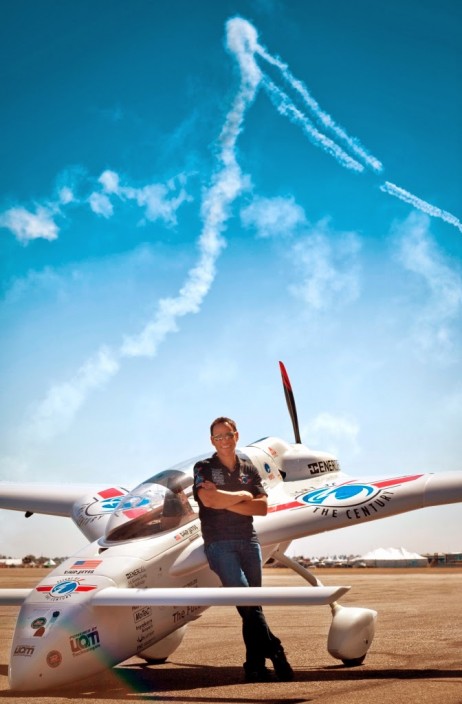 Your editor was on hand for the California Capital Airshow last October to see Chip take his Long-ESA to 500 meters (1,640 feet) from a standing start in only 62.58 seconds, 17 seconds faster than the previous record set by a fossil-fuel burner.

Chip sees these achievements as helping overcome the image problem with which electric vehicles have long contended.  His press release explains, “’With these records, we are continuing to show the world that electric vehicles don’t have to be slow and boring,’ said founder (of Yates Electrospace Corporation) and test pilot Chip Yates, who also holds ten world records with the World’s Fastest Electric Motorcycle.  ‘No one imagined just a few years ago that a plane powered by nothing but batteries could go 220 miles per hour and out climb Cessnas and Pipers and those kind of long-standing gasoline airplanes!’”

Of the five world records, the most surprising, according to Chip, is the “Time to Climb to a Height of 3,000 Meters” result of 5 minutes and 32 seconds, selected by the NAA as the “Most Memorable Aviation Record of 2013.”  The press release explains, “From a dead stop on the runway to the acceleration, take-off and climb to 9,843 feet above ground level (3,000 meters), the electric airplane made use of its 258 horsepower and 400 foot-pounds of torque to produce a sustained climb rate of 2,000 feet-per-minute, which beats the published specifications of any gasoline piston single airplane currently for sale.”

He teamed with Red, a maker of high-definition digital video cameras, to create a stunning record of his record attempts.  We can only hope the full-length version shows up in IMAX theaters sometime soon.

Chip’s Long-ESA uses UQM Technologies’ high-performance electric motor (which also powered his motorcycle), “which does not require oxygen and, in conjunction with an EnerDel advanced lithium-ion battery pack, has demonstrated constant power at 93% thermal efficiency from the ground all the way to 15,000 feet in flight testing to date.  The aircraft is capable of regenerating electrical power during descents with an on-board kinetic energy recovery system (‘KERS’).”

Comparing his Long-ESA with the e-Fan from Airbus Industries, Chip notes his machine has three times the power, is much faster and demonstrates greater performance in all aspects.  He makes the comparison based on the fact that, “We did it all with volunteers and ZERO outside money!  His pride in his all-American, free-enterprise campaign is readily apparent.

Chip’s team continues to work on their mid-air recharging approach, with demonstrations planned in late 2014 or early 2015.  Successful tests will lead to Chip’s attempt at duplicating Charles Lindbergh’s 1927 flight using aerial recharging to help him cross 3,600 miles of Atlantic Ocean.

Named a “Pioneer of Aviation” by the State of California, Chip holds more than 10 patents and a Master’s Degree from the University of Southern California.

A “passionate advocate for Science, Technology, Engineering, and Math (STEM) education and outreach, [Chip} was recently named the National Spokesman for the Conrad Foundation, which celebrates the life and entrepreneurial spirit of astronaut Pete Conrad, the third man to walk on the moon.  He also recently launched www.rockstarofscience.com to promote his STEM speaking tour to schools, and is writing a book to encourage kids to overcome adversity in pursuit of their dreams entitled ‘The Hoodlum Diaries’ due out in 2015.”

Chip Yates and Long-ESA are probably destined for more records and further investigations of the limits of what can be achieved with electric aircraft.