The following press release was distributed by Dr. Birgit Weißenbach, wife of Calin Gologan and press representative for PC-Aero GmbH:

“Many press releases and articles were published in the whole world relating the Aircraft flown by Luminati Aerospace LLC in NY named Substrata V0 and the Solar Electric airplane from PC-Aero/Elektra UAS named Elektra One Solar. 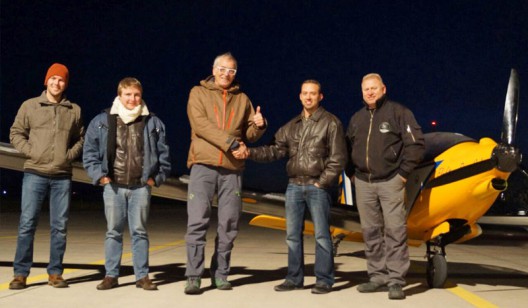 Calin Gologan giving a thumbs up while shaking hands with Bob Lutz, Luminati’s test pilot. Lutz had praise for the handling qualities of the aircraft

“For the aircraft delivered to Luminati the following changes were done by PC-Aero: aileron span was increased, wing flaps were excluded, the rudder chord was slightly increased.

“One of the goals of Luminati was to test with this aircraft their own concept of “wind-energy harvesting algorithms” in order to gain energy from wind turbulence. For this, Luminati and their ‘Dream Team’ developed a unique autopilot system which was adapted to the aircraft.

“The aircraft was built under the control of PC-Aero / Elektra UAS and Luminati then finally tested in flight by PC-Aero in Germany with a German UL Registration (D-MELO).

“Then the aircraft was delivered by PC-Aero to Luminati in NY. 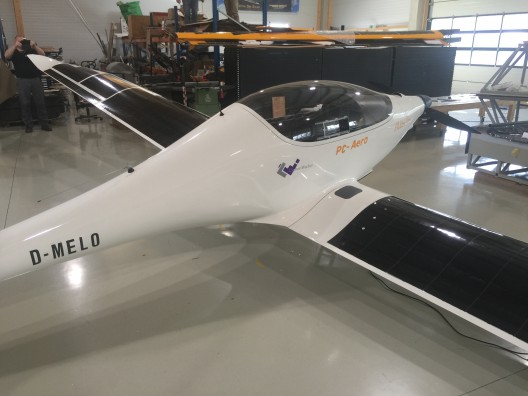 “After delivery the aircraft was registered by Luminati in [the] US in the experimental class and flown successfully by Luminati.”

As noted by Dr. Weißenbach, the first flight of a shorter-wing version of Elektra One took place in Germany in 2011.  It flew at Oshkosh in July, 2011 and won the Lindbergh Prize.  In 2015, a long-wing version of the airplane flew across the Alps in both directions and used only 18 kilowatt-hours of electricity for the complete trip.

There will more than enough credit to go around, though.  If Luminati’s wind energy harvesting algorithms add to the endurance of the craft, this would be a big accomplishment and make electric aviation even more attractive and practical.

We wish all concerned a grand success.