Ge-Cheng Zha, Professor in the Mechanical and Aerospace Engineering Department of the University of Miami (Florida) explores new realms of augmenting lift on wing surfaces.  He recently presented one aspect of this study, which he calls the CoFlow Jet.

Most conventional airfoils generate increasing amounts of lift with an increasing angle of attack, but that increase stops at around 12 to 15 degrees AOA.  The wing “stalls”, sometimes suddenly.  The ability to avoid this stall would increase flight safety immeasurably. 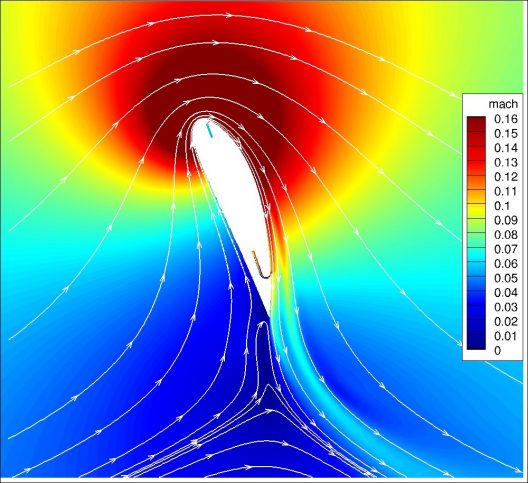 CFJ airfoil can achieve startling angles of attack without stalling

Phil Hendrie, a comedian with a radio and now podcast career, defined the worst possible circumstance as something that sucks and blows at the same time.  The antithesis to that is the CoFlow Jet (CFJ), offering an “active flow control airfoil.”  Described as, “An integrated system with propellers mounted above the CFJ wing suction surface,” CFJ offers better performance with lower power than conventional configurations by sucking and blowing at the same time.

Zha’s research, shown in short form in this video, highlights the high angle of attack achievable with this technology, although paying passengers may want a return on their funds after experiencing such attitudes.

David Ullman’s IDEAL: Integrated Distributed Electric-Augmented Lift project “makes use of multiple Electric Ducted Fans (EDFs) mounted, so they not only propel the aircraft but shape high-velocity air over the top surface of the wing. Ullman’s electric ducted fans are mounted above the forward portion of the wing, while Zha’s work integrates the distributed powerplants into the wing itself.

Performing high fidelity CFD (computational fluid dynamics) simulation at low speed, Zha’s  team has obtained a maximum lift coefficient of 9.6 at an angle of attack of 700 with no stall.

The lift coefficient is substantially greater than the theoretical limit of the maximum lift coefficient of 7.6. It is thus named super-lift coefficient. At the same time, the team’s CFD simulation shows that the CFJ airfoil is able to increase productivity efficiency by 36 percent for a supercritical transonic airfoil at cruise.  Thus, small electric motors could potentially power the theoretical craft at much lower power settings than for conventional aircraft. 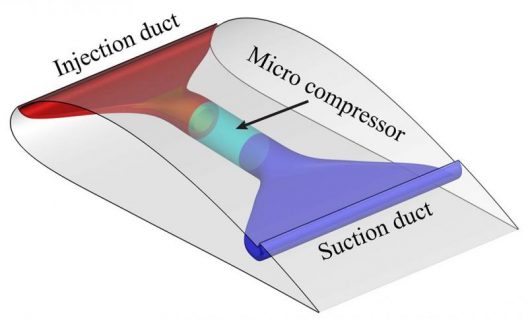 According to a report from the University of Miami, “Zha actually developed CFJ technology in 2003 while working at the Dayton, Ohio-based Wright-Patterson Air Force Base on a summer research project to improve the efficiency of jet engines.”   He has spent 15 years at the U of M designing, developing and building a prototype airfoil and wind tunnel testing it at Texas A&M and at a U of M-operated wind tunnel.

The University adds, “Test results have been astonishing, with data showing the new wing and its airfoil achieving a maximum lift coefficient that exceeds the theoretical limit of classical aerodynamics. ‘The co-flow airfoil can also have cruise efficiency significantly greater than the conventional one when the flow is benign,’ said Zha.”