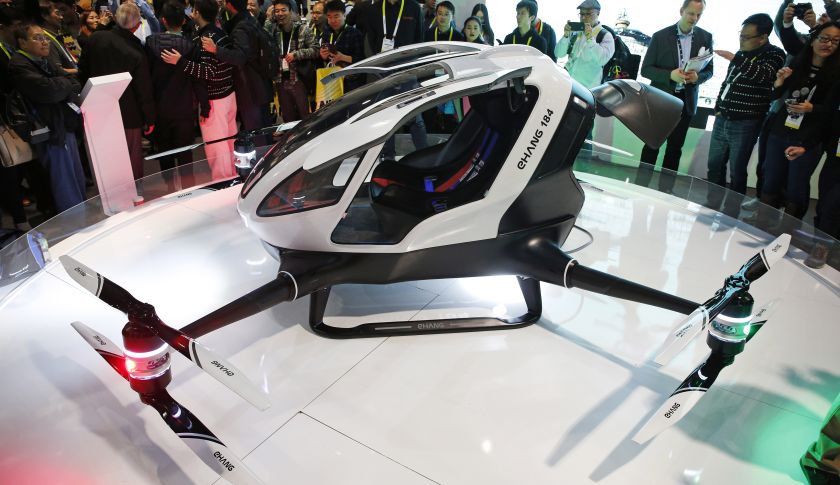 Making a lot of column inches of traditional newsprint and reigning as clickbait on the Internet, the Ehang 184 is an eye-catching Autonomous Aerial Vehicle (AAV) causing a bit of controversy in the media.  Unveiled at this week’s Consumer Electronics Show (CES 2016), it drew concentric circles of photographers who normally save their enthusiasm for the lovely models showing off the newest iPhone or PlayStation.

Coming from a firm that already makes hobby drones, the 184 (one passenger, eight motors, four arms) can carry its trusting passenger up to 20 miles, depending on who’s reporting.  Its 14.4 kilowatt-hour battery pack allows a maximum of 23 minutes of flight, and at 60 mph, a quick hop to a nearby destination, which Ehang describes as short to medium-range flight.

Cnet.com considers licensing.  “Ehang said that it’s working with multiple governments around the world and that no pilot’s license will be required to use the 184 AAV. Passengers navigate by tapping a destination on an electronic map on the aircraft’s tablet interface, and the 184 handles the rest.

“Because of those regulatory issues, it’s not yet clear when the craft will go on sale, the company said. Pricing also is uncertain, but the company hopes the machine will be something ordinary people can afford more than a toy only for billionaires.”

OK, maybe multi-millionaires can put them on their gift lists, with reported pricing ranging from $200,000 to $400,000.  One can get a used Learjet for that, although it does require the drudgery of obtaining a pilot’s license – and an advanced one at that.  At a more practical level, the e-Gull from Mark Beierle, the ULS from Randall Fishman, or the EMG-6 from Brian Carpenter offer better range for far less money – and each allows personal control of the vehicle.

Their editor, probably at home with apps, seems a bit astonished at their presence on this aerial vehicle.  “And—get this—the Ehang 184 can be controlled entirely through a mobile app. In fact, Ehang says passengers only have to execute two commands: ‘take off’ and ‘land.’ Once you’ve set your course, the Ehang 184 will take off vertically, and use real-time sensor data (and presumably GPS) to keep you on course. “ 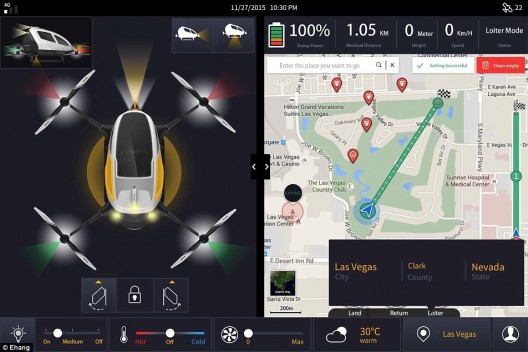 There’s an app for it! Simple setup and execution for Ehang gives a visual cue as to location and destination

Your editor is not quite as smitten, despite the high technology lavished on this machine.  For starters, the configuration seems a bit dicey – as in slicey and dicey – with the dual propellers at around knee and ankle height.  Keeping the unwary safe from accidental truncation should be a primary concern.

Considering the earnest efforts made to keep the pilot safe, based on the founder’s loss of two friends in more conventional aircraft and helicopter crashes, this seems a strange oversight.

Second, while there’s room for a 16-inch backpack in the trunk, there doesn’t seem to be room for a ballistic parachute, the ultimate safety gear on something that will accelerate rapidly earthward when all else fails.  Even multiply-redundant software packages are not as comforting as a BRS. 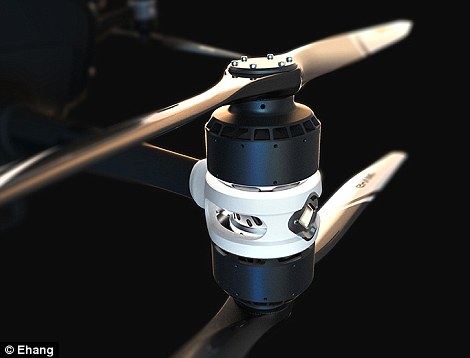 If the designers will put these final safety enhancements on their next iteration, They will still have a short-range, expensive device that has some utility, but might be better used as a rental utility device, rather than as a privately-owned plaything.

In the meantime, your editor is impressed with the fact that the company builds everything, including motors and propellers, in house, and that they are willing to share their failures along with their accomplishments with the world.