Two different lines of research in Korea and Australia seem to be heading toward practical supercapacitors with energy densities approaching the lower end of battery technology while offering better charging efficiency and extended lifetimes.

Santhakumar Kannappan, a researcher at the Gwangju Institute of Science and Technology in Korea has led a team who reduced graphene oxide particles with hydrazine in water, then agitated the slurry with ultrasound.  This produces a “highly porous form of graphene that has a huge internal surface area,” equivalent to a basketball court for every gram.  They pack the resulting powder into a coin-shaped cell, dry it at 140° C and a pressure of 300 kilograms per centimeter (4,267 pounds per square inch) for five hours. 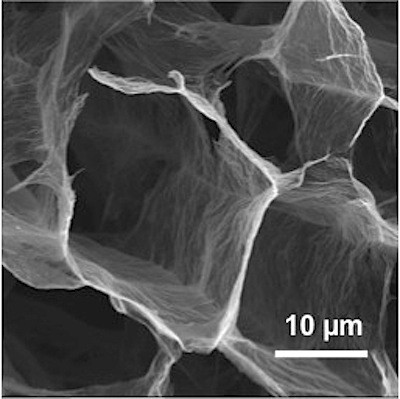 Graphene cork made last year by Monash University – lighter than air, able to support over 50,000 times its own weight, and a good conductor of electricity – because of its enormous internal surface area

Electrodes made this way and saturated in EBIMF 1 M electrolyte have a specific capacitance of 150 Farads per gram, an energy density of 64 Watt-hours per kilogram and a current density of 5 Amps per gram.

MIT’s Technology Review says, “That’s almost comparable with lithium-ion batteries, which have an energy density of between 100 and 200 watt-hours per kilogram.”  To this editor, that seems more like one-third of current best performers in the lithium battery market, although wildly more energy dense than most supercapacitors.

Of greater interest may be their longevity, with 10,000 charging/discharge repetitions “without a significant reduction in capacitance… the highest so far reported in the literature,” according to Gwangiu researchers.  Their supercapacitor pack also charges in a mere 16 seconds, beating the need to go shopping for long hours while one’s EV refreshes itself.

Kannappan and his team think that, “supercapacitor energy storage devices … can be scaled up for manufacturing in the near future for electric vehicle applications.”

Their research can be seen in greater depth in their paper, “Graphene based Supercapacitors with Improved Specific Capacitance and Fast Charging Time at High Current Density.” 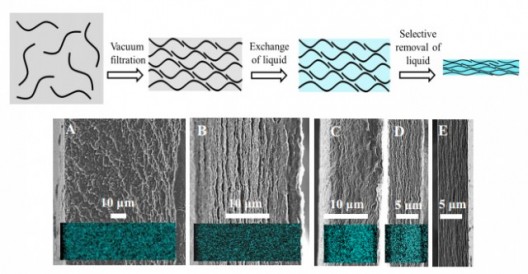 The manufacturing side of commercializing these breakthroughs may find a home at Monash University in Australia.  There, materials engineers make similar performance claims for their supercapacitor materials that are rolled out in a fashion like that of traditional paper making.

Dan Li, head researcher for this effort, says his team’s says his team’s supercapacitors are about 10 times more energy dense than commercial devices, noting energy densities similar to lead-acid batteries.  They even use a similar starting point, mixing graphite oxide that’s been reduced to low-grade graphene flakes in a solution of hydrazine and ammonia.  “As the mixture dries, the volatile solvent evaporates, causing capillary action to suck the graphene flakes together, with the electrolyte wedged between each of the flakes. Eventually the engineers are left with something that resembles a black sheet of paper — millions of layers of graphene, with oodles of charge-carrying electrolyte locked in.” 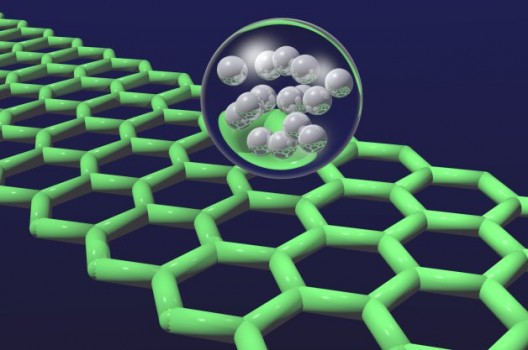 Artist’s conception of graphene supercapacitor charging – in only 16 seconds, rather than hours required for batteries

They end up with a paper-like creation that has a volumetric energy density of almost 60 watt-hours per liter, or about what a good lead-acid battery manages.  Li claims higher potential cycle life, though, citing 90-percent capacitance retention after 50,000 charge/discharge cycles.  The paper holds 90-percent of its charge after 300 hours.

Both research projects end up with similar outcomes in different formats, and the “solution-based chemical reduction of graphite oxide” common to both may well be a way to commercialize graphene.

Monash’s research is revealed in the paper, “Liquid-Mediated Dense Integration of Graphene Materials for Compact Capacitive Energy Storage,” in the August 2013 journal Science.

With supercapacitors well behind lithium batteries at this point, these two breakthroughs have brought supercapacitors to performance levels well beyond anything previously seen.  The perfect combination of battery and supercapacitor technology may yet bring us a practical and economical means of energy storage.