We’ve written a great deal about ways of making so-called “bio-fuels,” those ethanol, methanol and even diesel substitutes that avoid the high toxicity and environmental harm of fossil fuels.  Often though, these substitutes require the diversion of foodstocks or the use of exotic catalysts and high energy inputs to trigger the appropriate mechanisms.

Scientists as Stanford University may have found a way to use copper, though, to make ethanol without corn or other plants.  They’ve “created a copper-based catalyst that produces large quantities of ethanol from carbon monoxide gas at room temperature.”

Matthew W. Kanan, Assistant Professor at Stanford, has been working toward this kind of biofuel production for many years.  His University profile contains the following: 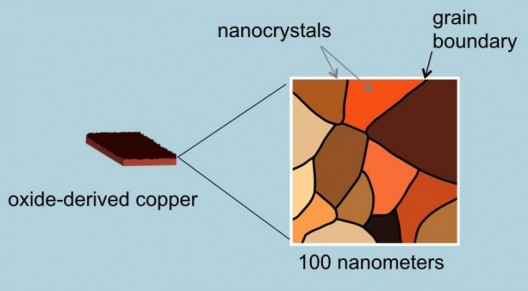 “The ability to convert H2O, CO2 and N2 into fuels using renewable energy inputs could in principle provide a viable alternative to the current dominance of fossil fuels. This prospect faces great technical challenges, the foremost of which is the lack of efficient and robust electrocatalysts for the various multi-electron processes that fuel synthesis demands. We are working to address this deficiency for the two most challenging reactions: CO2 reduction and N2 reduction. Our efforts focus on developing new heterogeneous electrocatalysts and unveiling the electrochemical mechanisms by which these catalysts operate. Materials of particular interest include metal/metal oxide composites and nanostructured metal surfaces. The ultimate goals of this research area are to develop catalyst design principles that are applicable to multiple materials and to provide viable candidate electrode materials for electrolytic devices.”

Kanan and fellow researcher, Stanford graduate student Christina Li, have published the results of their research in the April 9 advanced online edition of the journal Nature.  Most ethanol production requires high-temperature fermentation facilities that convert corn, sugarcane and other plants into liquid fuel.  These types of production techniqes are energy intensive and highly resource dependent.  As the Stanford press release by Mark Shwartz explains, “In some parts of the United States, it takes more than 800 gallons of water to grow a bushel of corn, which, in turn, yields about 3 gallons of ethanol.”

A better approach would be to consume the lowest energy possible in the process – to avoid using more than the system produces; and to avoid using plants at all.  Let them live to give off oxygen and take in CO2.

Kanan and Li had to craft a special electrode material made from “oxide-derived copper,” formed from copper oxide, as the name implies. Kanan explains the subtle distinctions involved.  “Conventional copper electrodes consist of individual nanoparticles that just sit on top of each other.  Oxide-derived copper, on the other hand, is made of copper nanocrystals that are all linked together in a continuous network with well-defined grain boundaries. The process of transforming copper oxide into metallic copper creates the network of nanocrystals.” 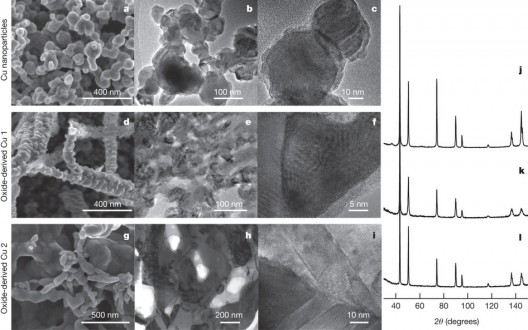 Conventional cells produce oxygen and hydrogen gas when a voltage is applied across the electrodes.  Kanan and Li’s cell has two electrodes placed in water saturated with carbon monoxide gas and reducing that carbon monoxide to ethanol.

Their cathode made of oxide-derived copper required only a small voltage to produce “dramatic” results.

“The oxide-derived copper produced ethanol and acetate with 57 percent faradaic efficiency. That means 57 percent of the electric current went into producing these two compounds from carbon monoxide. We’re excited because this represents a more than 10-fold increase in efficiency over conventional copper catalysts. Our models suggest that the nanocrystalline network in the oxide-derived copper was critical for achieving these results.”

The video below gives the background for Kanan’s work and at about the 27 minute mark details directly the work outlined here.  The payoff in terms of what it would take to commercialize this and capture vast quantities of CO2 are a bit daunting, but as the scientist points out, a smaller effort than building the numbers of cars we produce each year.  One can only imagine the number of jobs this would create.

Making the process carbon neutral would be icing on the cupric cake.  As Kanan and Li look for ways to increase efficiency and scale up the process, they look to the sun or wind to provide the energy needed to produce the ethanol.  Then, they’ll need to find a way to produce carbon monoxide, which might come from atmospheric CO2, then fed to their copper catalyst to make liquid fuel.   “The CO2 that is released into the atmosphere during fuel combustion would be re-used to make more carbon monoxide and more fuel – a closed-loop, emissions-free process.”

Kanan concludes, “Technology already exists for converting CO2 to carbon monoxide, but the missing piece was the efficient conversion of carbon monoxide to a useful fuel that’s liquid, easy to store and nontoxic.  Prior to our study, there was a sense that no catalyst could efficiently reduce carbon monoxide to a liquid. We have a solution to this problem that’s made of copper, which is cheap and abundant. We hope our results inspire other people to work on our system or develop a new catalyst that converts carbon monoxide to fuel.”

The Nature study was coauthored by Jim Ciston, a senior staff scientist with the National Center for Electron Microscopy at Lawrence Berkeley National Laboratory.

The research was supported by Stanford University, the National Science Foundation and the U.S. Department of Energy.