Green Air Online reports on “what could be a significant breakthrough,” Boeing’s identification of “green” Diesel as a new source of sustainable aviation biofuel.  Green Diesel is similar chemically to current aviation biofuels, emits “at least” 50 percent less carbon dioxide than fossil fuel over its life cycle, and could be blended directly with existing fossil-based jet fuels.  Similar to petrodiesel, this fuel has some specific definitions that distinguish it from “biodiesel.”

According to Advanced Biofuels USA, “Renewable Diesel, often called “green diesel” or “second generation diesel,” refers to petrodiesel-like fuels derived from biological sources that are chemically not esters and thus distinct from biodiesel.  Renewable diesel is chemically the same as petrodiesel, but made of recently living biomass.

“…Renewable diesel is chemically similar to petrodiesel… The term “renewable diesel” refers to all diesel fuels derived from biomass that meet the standards of ASTM D975 and are not mono-alkyl esters.”  The last line makes your editor again regretful he did not pay more attention in chemistry class.  Simply, this type of green Diesel is a “drop-in” fuel, requiring no changes in infrastructure and is therefore transparent in its application for end users.

Dr. James Kinder, a Technical Fellow in Boeing Commercial Airplanes’ Propulsion Systems Division, explains, “Green diesel approval would be a major breakthrough in the availability of competitively priced, sustainable aviation fuel.  We are collaborating with our industry partners and the aviation community to move this innovative solution forward and reduce the industry’s reliance on fossil fuel.”

Boeing says that current green Diesel production capacity can supply as much as one percent of global commercial jet fuel demand.  Its price, around $3.00 per gallon, is competitive with petroleum jet fuel’s current price of about $2.97 per gallon. 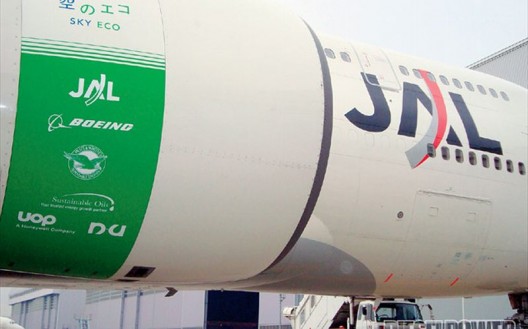 Green diesel can be used in any diesel engine and is made from oils and fats derived from sustainable and non-food plants such as algae, which can produce 30 times the oil per acre of other feedstock crops; halophytes, which grow in salt marshes and other areas inhospitable to conventional agriculture; and plants such as jatropha and camelina, which thrive in normally non-arable land.  These sources free arable land for food production for an increasingly hungry world.  NASA’a Dennis Bushnell has expounded on these advantages in two talks at recent Electric Aircraft Symposia.

Boeing collaborates with 27 airlines in the Sustainable Aviation Fuel Users Group, research institutions, governments and other stakeholders to develop sustainable biofuel supply chains around the world, including the United States, Middle East, China, Brazil, Europe and Australia.  This group is “committed to developing biofuel that is produced sustainably and without adverse impacts on greenhouse gas emissions, local food security, soil, water and air.”