The original Ford Tri-Motor had a body by Ford and three Pratt & Whitney radial engines arrayed across its nose and wings.  The Phantom Eye has a body by Boeing, and two 2.3-liter Ford engines fueled by the hydrogen the airplane carries in its bulbous fuselage. 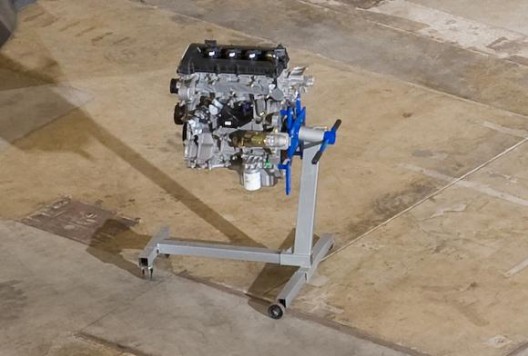 It first flew last June, but hit a snag on landing, or at least dug in and twisted a landing skid, rendering it inoperable until this year. Boeing performed software and hardware upgrades, including strengthening the landing gear.  Its second flight was a big success with a successful landing – a great one even, since the airplane is reuseable.  This is particularly helpful for Boeing, which funded the project out of its own pocket.

The company commented on the expectations raised by the flight: “Boeing’s liquid hydrogen-powered Phantom Eye unmanned airborne system completed its second flight Feb. 25, demonstrating capabilities that will allow it to perform intelligence, surveillance and reconnaissance (ISR) missions for up to four days without refueling.” 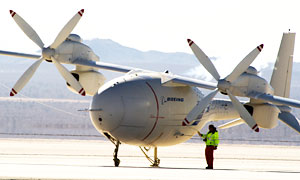 Last June, Phantom Eye reached an altitude of 4,080 feet and stayed up for 48 minutes.  On February 25, it went above 8,000 feet and flew for 66 minutes, cruising at 62 knots over Edwards Air Force Base in California.

Boeing touts the big machine as an “environmentally responsible” tool, which generates only water as a byproduct of its propulsion system.

Ultimately, this demonstrator could carry a 450-pound payload while operating for up to four days at altitudes of up to 65,000 feet.  Even that is only preparation for the full-scale Phantom Eye with its 250-foot wing span and one-ton maximum payload.  With a lighter payload, it could loiter at 65,000 feet for up to three weeks, achieving speeds of 200 knots at altitude. 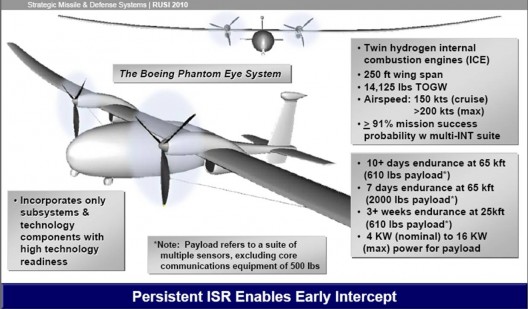 The UK’s Register notes, “Boeing has no customer lined up for the Phantom Eye, but would naturally hope that various arms of the US government might like to buy it for ‘missions that could include intelligence, reconnaissance, surveillance and communication’”.