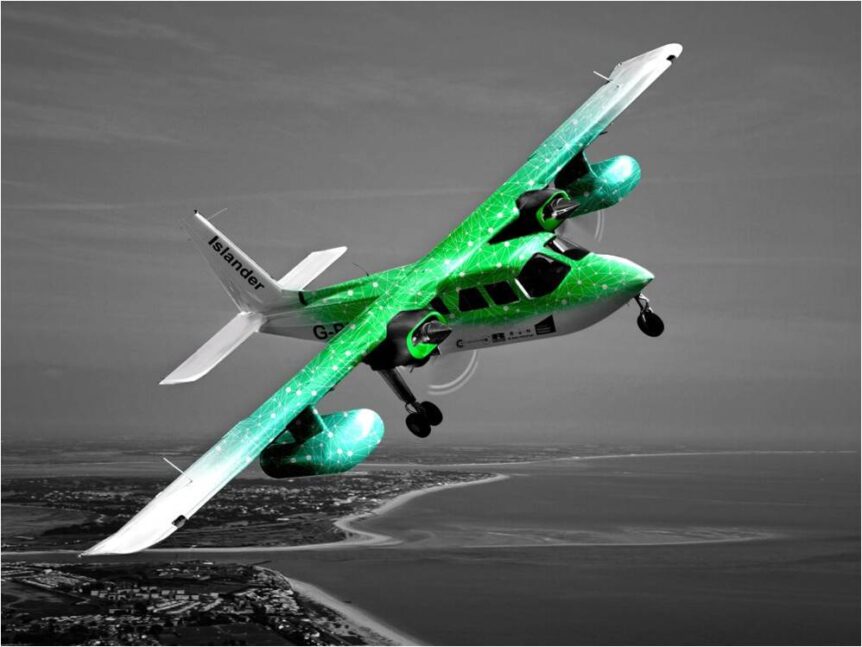 Cranfield, England and its local university are hubs for electric aircraft development.  Dr. Guy Gratton is test flying The Light Aircraft Company’s eKub on 48-Volt battery power, ZeroAvia is crafting a Dornier 228 to run on hydrogen, and now Cranfied Aerospace Solutions (CAeS) is readying a Britten-Norman Islander for H2-powered flight in 2023.

Living up to its name, Britten-Norman’s Islander seems to be busy worldwide island hopping.  The twin-engine plane ever makes the world’s shortest scheduled flights, including this between Juist to Norden across the Wadden See.  The 74-second flight is less than the time spent taxiing at the beginning and end of the hop.

Designed and developed in the 1960s, 750 Islanders of the 1,280 built are in service with many small airlines and over 30 militaries.  Now, other enterprises are banding together with Britten-Norman and Cranfield Aerospace Solutions (CAeS) to bring hydrogen flight to the Isles of Scilly, a popular English vacation destination.

Three companies signed a Letter of Intent (LOI) to make zero-carbon flight to the Islands a reality.  The Isles of Scilly Steamship Group (ISSG) may seem like an odd partner in an aeronautical endeavor, but the company offers flights from Penzance at the western tip of England to the Isles and back, or a combination of steamship and aircraft travel coming and going.  The Islands are only37 miles (59 kilometers) off the coast and should be an easy jaunt for even a battery-powered airplane. 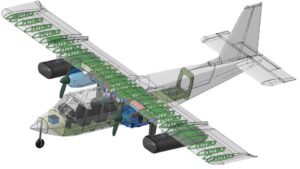 Cranfield Aerospace Solutions is developing its hydrogen fuel cell propulsion system for an existing nine-seat Britten-Norman Islander aircraft, which is planned to be flying by 2023 and is now working with easyJet to understand how the adoption of zero-carbon technologies could integrate with an airline operations for future introduction of the technology. Courtesy Cranfield Aerospace Solutions (CAeS)

Since the Isles are islands have been designated a Conservation Area, Area of Outstanding Natural Beauty, a Heritage Coast and a Special Protection Area, clean H2 flight will help protect their pristine standing.

Project Fresson, a consortium of government and private enterprises, is led by CAeS, using an Islander provided by ISSG.  The craft will be rebuilt and reconfigured with two large liquid H2 tanks, one under each wing.  Tanks will be provided by Innovatus Technologies Ltd, which “leads the field in next-generation ultralightweight hydrogen tank design exploiting patented cellular core composite techniques.”  Innovatus is active in the creation of the “Scottish Hydrogen Fuel Tank (SHyFT), fitting since the project is named after Scottish aviation pioneer Ted Fresson.  The powertrain will be overseen by Safran Aerospace, replacing the role Rolls-Royce played in the original planning. 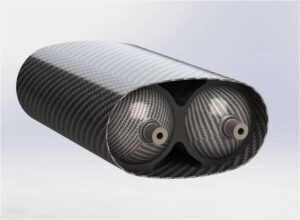 H2 Islander will use two dual-tank units, one under each wing, to fuel flight

Battery power, because of the weight of the power source, would require leaving a passenger or two behind on each flight.  Hydrogen provides a lighter weight power system, faster turnaround times, a potential 50-percent reduction in powertrain maintenance costs, and 40- to 50-percent lower variable costs.  According to CAeS, “Green hydrogen can be produced locally using renewable energy. It can also be stored at an operating base with relative ease and without the need to provide complex charging networks.”

The Project proposes to deliver a flying demonstrator aircraft by September, 2022.

Another partner, Evia Aero will produce 10 aircraft to “support EVIA AERO’S plans to develop sustainable aviation around the northern coasts of Germany, The Netherlands and Denmark and will contribute to the environmental concerns and goals of the region.”  That project has a 2025 timeline.

A study by the International Council on Clean Transportation (ICCT) has found that, “Hydrogen-powered aircraft could cap emissions from passenger aviation with policy support and ‘look surprisingly viable from a design perspective’.” 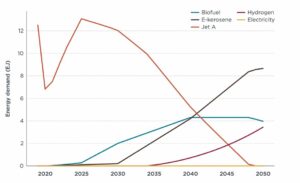 Cranfield cites a study by the International Council on Clean Transportation that suggests H2 flight would be a viable alternative to the use of sustainable aviation fuels (SAF).  “According to the ICCT white paper – Performance analysis of evolutionary hydrogen-powered aircraft – liquid hydrogen combustion aircraft could provide carbon-free air travel on up to a third of global passenger demand starting in 2035. The study outlines that aircraft burning ‘green hydrogen’ produced from renewable energy could enable flights up to 3400 km (2,108 miles) at reduced fuel costs compared to sustainable aviation fuel.”

Obviously, bigger craft and longer ranges are in the works, and the growing capabilities in producing green hydrogen will enable a broader support for clean flight.  Perhaps we can turn aviation around before we have to face the consequences of our addiction to fossil fuels.