Many scientists are turning to mimicking nature to probe its secrets, but Daniel Nocera, the Patterson Rockwood Professor of Energy at Harvard University, has gone far beyond his natural model.  Reported in 2012, Nocera came up with the idea of an “artificial leaf,” a silicon sheet with a layer of cobalt-based catalyst that releases oxygen on one side and a layer a nickel-molybdenum-zinc alloy on the other side that releases hydrogen.  Several researchers have followed this initial breakthrough, trying different materials and combinations of ingredients.

For a while, it looked as though Nocera turned his attention to battery development, but recent news shows he’s back investigating artificial leaves – with great improvements over his initial efforts – and those of nature, it would seem.

His newest approach combines the catalytic energy of the original leaf with a bacterium that makes useful fluids out of the hydrogen generated.  It makes the leaf’s output a practical liquid – a fuel. 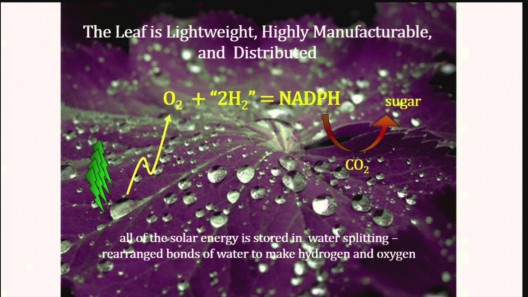 The philosophy behind Nocera’s artificial leaf

It probably helps that Pamela Silver, the Elliott T. and Onie H. Adams Professor of Biochemistry and Systems Biology at Harvard Medical School, can add insights into the biological processes that enhance the chemistry involved with the artificial leaf.

The Harvard Gazette reports, “In many ways, Nocera said, the new system marks the fulfillment of the promise of his ‘artificial leaf – which used solar power to split water and make hydrogen fuel.

“’If you think about it, photosynthesis is amazing,’ he said. ‘It takes sunlight, water and air–and then look at a tree. That’s exactly what we did, but we do it significantly better, because we turn all that energy into a fuel.’”

Forbes Magazine added that Nocera told the Energy Policy Institute at Chicago, “Right now we’re making isopropanol, isobutanol, isopentanol. These are all alcohols you can burn directly. And it’s coming from hydrogen from split water, and it’s breathing in CO2. That’s what this bug’s doing.”  The “bug,” Raistonia eutropha, consumes hydrogen and CO2 and converts them into adenosine triphosphate (ATP), the energy molecule used by natural organisms.

Combining chemistry and biology turns out to make things hum along nicely, 10 times more efficiently than natural photosynthesis can manage.  Leaves convert about one percent of sunlight into useful stuff in plants.  Nocera and his team are managing 10-percent conversions.

According to Forbes, the process is essentially carbon neutral.  A one-liter reactor filled with Nocera’s bacteria can capture 500 liters of atmospheric CO2 per day. For every kilowatt hour of energy they produce, they’ll remove 237 liters of CO2 from the air.

Interestingly, Nocera, a member of the Indian Academy of Sciences, wants India to be among the first countries to develop his breakthrough.  Nocera feels that since the technology can work in areas with no established power grid, and can make hydrogen out of even dirty water, undeveloped parts of countries like India will work hard to make the leaf work.  Nocera has seen too many good ideas go unfulfilled because they can’t guarantee an immediate payback to American investors.  Tata, a major industrial firm in India, has worked with Nocera in developing the original leaf.  His sometimes quirky Ted Talk explains much of his reasoning.

Nocera, Silver, and their team, including Chong Liu, Brendan C. Colón, and Marika Ziesack, published their findings in the June 3 issue of the journal Science.