Getting the Parts Free, Charged for Refills

What if future flight had a simple “return the old fuel container and get a new one” business model?  Paul Eremenko, founder of California startup Universal Hydrogen, wants to try it out in a Dash 8 airliner equipped with two 2-megawatt motors supplied by MagniX.

Poor analogy perhaps, but in his boyhood, your editor had a camera that was sold at the store complete with a roll of film already inside.  All you had to do when you took all your pictures was send it by mail, with a check or money order, and a week later, you got the reloaded camera back with the prints and negatives of your pictures.  This klunky, pre-digital plan carried over from Kodak’s version 100 years before.

Today, with digital photography having supplanted those earlier, more tedious processes, we save on postage and wasted photos. Let’s face it – we all like rapid rewards and instant gratification.  Charging your electric airplane takes hours and some of us just can’t wait around. 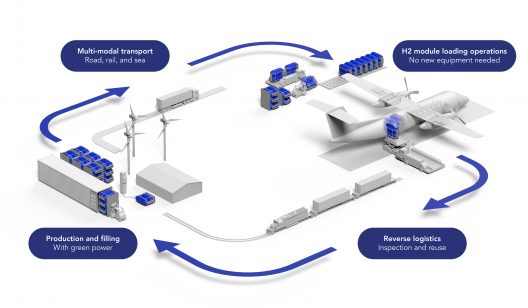 Universal Hydrogen will supply hydrogen fuel modules directly from their production facilities to the aircraft.  Universal offers, “To cover all or part of the conversion kit costs for the new propulsion system in return for long-term contracts to supply the hydrogen.”  This should encourage “early adoption” and place new power systems in existing craft – speeding up the usage of H2 while manufacturers develop new designs more optimal for its use.

Eremenko, his fellow Universal founders and partner Roei Ganzarski, CEO of magniX are true believers – in the best sense of the term – in the future of electric aviation.  MagniX runs its electric motors from batteries, as on its DeHavilland Beaver and Cessna Caravan conversions. Universal plans on running two of the largest MagniX motors to date on its DeHavilland Canada Dash 8 conversion.  The Dash 8 is officially a DHC8-Q300, and is now manufactured by Bombadier as a Q8.  The same system can be applied to the Avions Transport Régional ATR 42 family.

The kit proposed by the partnership will use twin two-megawatt motors – the largest for MagniX and possibly all of electric aviation.  Although the motor is a more powerful version of the MagniX line, the fuel system will be different.  Eremenko plans to change the way hydrogen is delivered to the aircraft though packaging the element in modular form.

According to AIN Online, “Universal Hydrogen’s response has been to treat the fuel as dry freight and find a safe, efficient way to maintain supply to airlines. Its modules, which measure about seven feet long and three feet in diameter, can carry the hydrogen in liquid or compressed gas form to be loaded into the back of the aircraft via standard cargo loading equipment or a forklift.”  Modules would be delivered directly from H2 manufacturing plants, presumably close at hand. 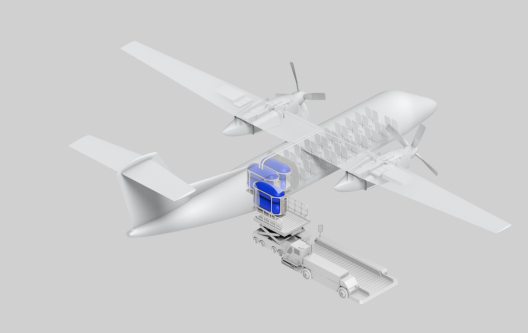 If filled with water, each module would hold about 208 gallons.  They can be stacked in racks so that 54 would fit inside a standard freight shipping container.

Eremenko further explained his push to bypass the conventional infrastructure. “There is fundamentally an incrementalist mindset in the incumbents.  Hydrogen is a fairly drastic step for the industry. I think it’s a necessary step, given the industry has no other way to meet the goals of the Paris agreement.’’

With increasing amounts of “green” hydrogen being produced and prices dropping, the fuel may be a way to reduce or eliminate the 2.5 to 5 percent of greenhouse gases produced by aviation.  This figure is bound to climb as flights resume and passenger numbers grow.  Clean H2 fuel would reduce the amount of “flight shaming” currently fashionable.

Paul Eremenko has hopes for his idea’s early series production. “Clearly there is still a lot to be done in terms of reducing emissions from commercial aviation, and the future of the industry lies in hydrogen-based, carbon-free energy.”

“Universal Hydrogen, through its hydrogen transport and distribution infrastructure solution, is on a path to change the way regional flight is achieved and transform it from being powered by decades-old, expensive, polluting technology to low-cost clean solutions,” says Roei Ganzarski, CEO of magniX. “Together, we will bring scalable, proven technology to the next level of electric aviation.”