According to his biography on Airliners.net, “David Birkenstock is a pilot for an east-coast charter and management firm, flying the Turbo Commander 690B and the BeechJet 400A. When he’s not flying, he’s working on modifying a light sport airplane for pressure thrust, hoping to enter it into the NASA Personal Air Vehicle Challenge. He has posted more information about pressure thrust at PressureThrust.com.”

Birkenstock’s presentation at the fifth annual Electric Aircraft Symposium in Santa Rosa, California on April 29, 2011 extended his thoughts on pressure thrust, an outgrowth of Fabio Goldschmied’s theories that are well represented in the CAFE Foundation’s library.

Most surprising (or maybe not surprising at all) in his talk were comments by major players in the aerospace industry. Around 2000, a senior airflow fellow for a “major airframe manufacturer was quoted as saying, “Our position is that aviation is a mature business and that the discoveries waiting to be identified are probably not worth looking for, much less implementing. Someone would have found them by now.” According to Birkenstock, the concept was seen as simply incorrect.

A United States military branch Chief Scientist in 2010 proposed an apples and bananas comparison. “Only by comparing a very high drag configuration, such as massively separated aft-end flow without boundary layer control, to a very low drag configuration in which large suction fan power is used to maintain a fully attached aft-end boundary layer, could drag reductions even close to 50 percent be realistically expected from this approach.”

This skepticism is admirable in science, but usually when it’s being used in an attempt to disprove one’s own theory.   These scoffers reminded your editor of his college literature professor, who told of being in a physics class one hundred years ago. The professor explained to the class that they should look elsewhere for employment, because all that was of interest in physics had already been discovered. This was less than a decade before Niels Bohr, Albert Einstein and Max Planck would revolutionize the field.

Birkenstock paraphrased Barnaby Wainfan, explaining that ideally, we want to leave the air as it was before we got there. Optimistic that “very advanced” NLF airfoils can be made still more efficient, he looks to more complete pressure recovery at the trailing edges of such airfoils to give added benefits, possibly using civilian off-the-shelf suction fans from radio controlled, ducted fan models to pull in the final fringes of turbulent air.

Birkenstock explains that with lowered high-speed drag, “The design cycle turns virtuous,” leading to the ability to use less powerful engines that use less fuel, which means the airplane can employ lighter airframes, smaller brakes and other components. Like electronics, this could actually result in the much lauded model: smaller, faster, cheaper.

His United States Patent Application 20090076787 for “A system and method for drag reduction allows thrust output, fuel efficiency or both to be maximized.” Specifically, a rear portion of a body or motor vehicle may be modified to increase thrust output, fuel efficiency or both by creating a stagnation area, a suction inlet and a convex cusp area formed on the rear portion of the motor vehicle. Increasing the concavity or camber or sharpness of the radius of the stagnation area results in greater local pressure coefficient, which results in greater thrust output. The size and shape of the suction inlet and the convex cusp area will also have an effect on thrust output and fuel efficiency. A width and volume of an airplane fuselage may be increased. 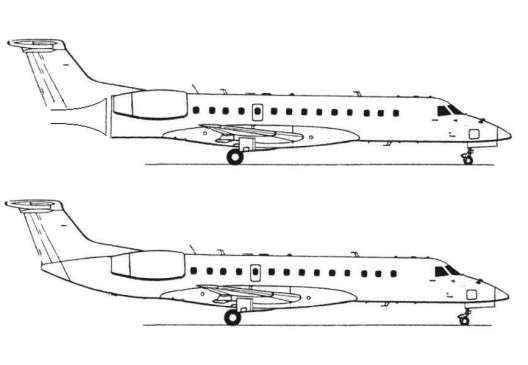 He uses the term “synergy” repeatedly on his web site, and ideas similar to that used on John McGinnis’ design are employed in Birkenstock’s article on Airliners.net.   His “crude and exaggerated image of pressure thrust added to an Embraer 135 fuselage” shows a use of Goldschmied theory that would allow “the main engines [to] run near flight idle” at cruise speed because “most of the required thrust would be pressure thrust.” He thinks replacing tail cones on jet liners and executive aircraft with a similar pressure thrust type system could reduce fuel use 20 percent.

David Birkenstock’s contributions to the ideas of greater efficiency drew a favorable response from the Symposium’s audience and proved a thoughtful introduction to the forum on Goldschmied propulsion that followed.