Most stories featuring this scientific couple’s (and a few associates’) work focused on the 10-minute charging time for their portable electronics batteries.  More interesting to those who look forward to applying this technology in electric vehicles, the three-dimensional, silicon-decorated, cone-shaped carbon-nanotube cluster architecture for lithium ion battery anodes enables a “63 percent increase of total cell capacity and a battery that is 40 percent lighter and smaller.”

“Than what?” your editor’s high school math teacher would have insisted.  The decorated item would be 63 percent better at holding a charge and 40 percent lighter and smaller than a similar cell with a graphite anode common to many lithium-ion batteries.  Even though the researchers concentrated on the anode and seemed not to take a more holistic approach to battery design, the overall results seem promising. 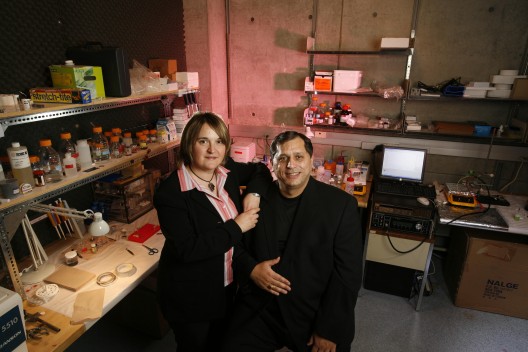 The Ozkans in their UC Riverside laboratory

Husband and wife team Cengiz S. Ozkan, a mechanical engineering professor at UC Riverside’s Bourns College of Engineering; and Mihrimah Ozkan, an electrical engineering professor, worked with graduate and undergraduate students at the University to develop a unique battery that can, in addition to storing more energy in a smaller package, be recharged in only 10 minutes, as opposed to hours.

Their paper, “Silicon Decorated Cone Shaped Carbon Nanotube Clusters for Lithium Ion Battery Anode,” was recently published in the journal SMALL.  They crafted their conical battery architecture by applying “vapor deposition and inductively coupled plasma treatment,” techniques which help the battery achieve “ultrafast rate[s] of charge and discharge,” which for the anode alone can be “16 times faster than conventionally used graphite based anodes.”

The research team claims high reversible capacity and excellent cycling stability for the resulting battery. The architecture demonstrates excellent electrochemical stability and reversibility even at high charge and discharge rates,

Wei Wang, lead author of the paper, attributes the battery’s characteristics to two factors.  “One, the seamless connection between graphene covered copper foil and carbon nanotubes enhances the active material-current collector contact integrity which facilitates charge and thermal transfer in the electrode system.

“Two, the cone-shaped architecture offers small interpenetrating channels for faster electrolyte access into the electrode which may enhance the rate performance.”